Pacific Vision: Even though 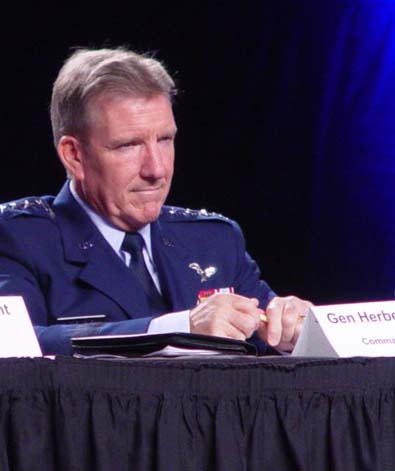 the new defense strategy clearly articulates a shift in focus from the Middle East to the Asia-Pacific region, Pacific Air Forces Commander Gen. Hawk Carlisle said he doesn’t foresee a significant increase in force structure in the region. “It won’t go down, but I don’t see it going up in big numbers either,” said Carlisle during AFA’s Air & Space Conference in National Harbor, Md., Sept. 18. He said the phrase “places not bases” is likely to become a common part of the Pacific vernacular as this shift unfolds. The bomber presence, which has been in the Pacific since 2004, “may increase.” The Air Force will deploy 12 F-22s to Andersen AB, Guam, and another 12 to Kadena AB, Japan, even as it “continues to rotate more through.” Carlisle said there also will be an increase in the number of engagements, citing the use of the C-130 medical capability as an example. “I see a lot of force in CONUS rotating through the Pacific to work tactics, techniques, and procedures, get experience, and continue to expand that engagement,” he added.