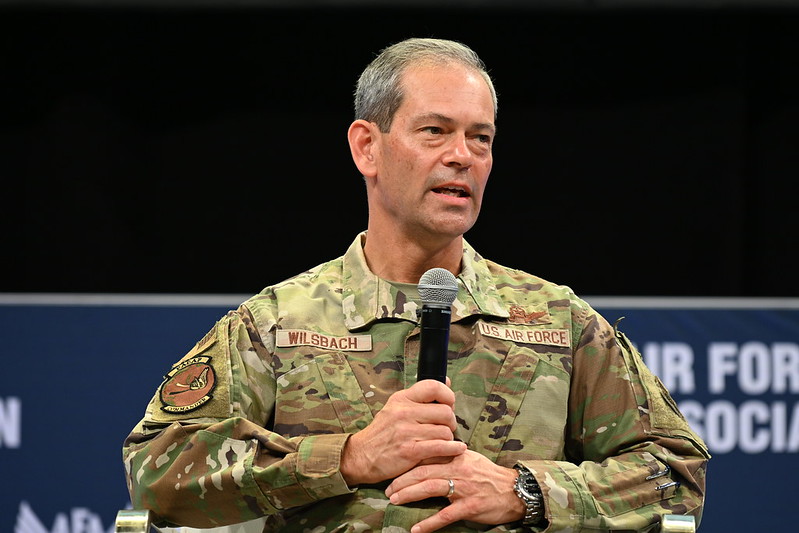 PACAF’s Wilsbach: China and Russia Cooperate but Are Not Interoperable—No One in Charge

China and Russia cooperate militarily and have held a number of joint exercises, but they don’t have interoperable forces, and there’s competition between them as to just who’s in charge of their erstwhile alliance, said Gen. Kenneth S. Wilsbach, commander of Pacific Air Forces, during an AFA Mitchell Institute streaming discussion March 14.

“We’ve seen some integrated bomber patrols,” Wilsbach said, in which Chinese and Russian bombers, “along with their command control aircraft and tankers, have done very short exercises together through the Pacific,” but these have not been numerous.

The countries have pledged mutual support in recent weeks, particularly after Russia’s invasion of Ukraine, which some have argued may present China with an opening to attack Taiwan. Wilsbach did not mention that the two countries have jointly practiced amphibious landings in recent years.

“There’s been a couple of other exercises that we’ve seen them do together, but I would not say that they’re interoperable in any way,” Wilsbach added. “Their systems are quite different.” He added that it’s “interesting to see the power play: China thinks that they should be the lead, and Russia thinks they should be the lead, so I’m fairly happy with that tension, there.” Wilsbach said he believes this issue will “be a problem for them” in the future.

Besides their own lack of interoperability, China and Russia can’t help but see that the U.S. and its allies and partners in the Pacific do possess this advantage, Wilsbach said.

“They see us flying with Republic of Korea and with Japan and Australia,” as well as with Indonesia, India, Malaysia, and Singapore.

“We fly with them routinely,” he noted, “And we’re interoperable … We’re flying a lot of the same equipment. We’re even data-linking together, in some cases. And, the tactics are very similar.” This interoperability is something “the Chinese really don’t have.”

The level of joint activity between Russia and China has dwindled since the invasion, Wilsbach reported, as “I do think they [Russia] are pretty well occupied” with Ukraine.

He said he also can’t tell whether China was in on the Russian invasion and played a role, or was as much a spectator as the rest of the world. Chinese president Xi Jinping said he did not expect Russia to invade Ukraine, despite its bellicose rhetoric.

“What happened there?” Wilsbach asked rhetorically. “Was Xi wrong? Was [he] part of the disinformation campaign that Russia was putting out? Or was he surprised, duped by the Russians?

Wilsbach said he didn’t know the answer but “it certainly makes me wonder about everything else that Xi says.” He added that he thinks China is taking “a pretty cautious approach right now, based on uncertainty of how this might turn out” and the “international backlash that’s happened toward Russia. They probably don’t want to get caught up in that.” Even so, “it still is very surprising that they’ve come up with the support rhetoric that they have.”

Broadly, China continues to operate in the Pacific “in many instances, outside the rule of law,” Wilsbach said, periodically making incursions on neighbor territory, using “predatory lending practices” to achieve influence in a number of countries, and denying democracy to Hong Kong.

The U.S. Air Force continues to do daily training in the region, which is one of the key differences from “a year or two ago: our frequent daily operations” that are “fully integrated” with the Navy and Marine Corps, Wilsbach reported, “mostly west of the [International] Date Line, to demonstrate what U.S. forces can do in that part of the world.”

He said he hopes that one of the “key lessons” the Chinese are taking from the Russian invasion of Ukraine is “the solidarity of the global community” in opposing “an unprovoked attack on a neighbor,” and the onerous sanctions that have economically crippled Moscow.

“I’m hoping China recognizes that,” he added, and that if China behaves in a similar way against Taiwan or another neighbor, “something more robust will happen,” Wilsbach said. An unprovoked attack would “provide solidarity for the nations to come together and oppose something like that.” He said it makes him chuckle that China accuses the U.S. of trying to create a NATO of the Pacific, but it’s China’s own actions that are inspiring those discussions. China should also consider, before undertaking adventurism like Russia’s, ”some of the terrain they would have to contend with” and the opposition of regional countries. Russia’s aggression has consumed much of its national treasure: “They’ve killed many of their own people as well as Ukrainians, and I’m hopeful China will pay attention to that, as well.”