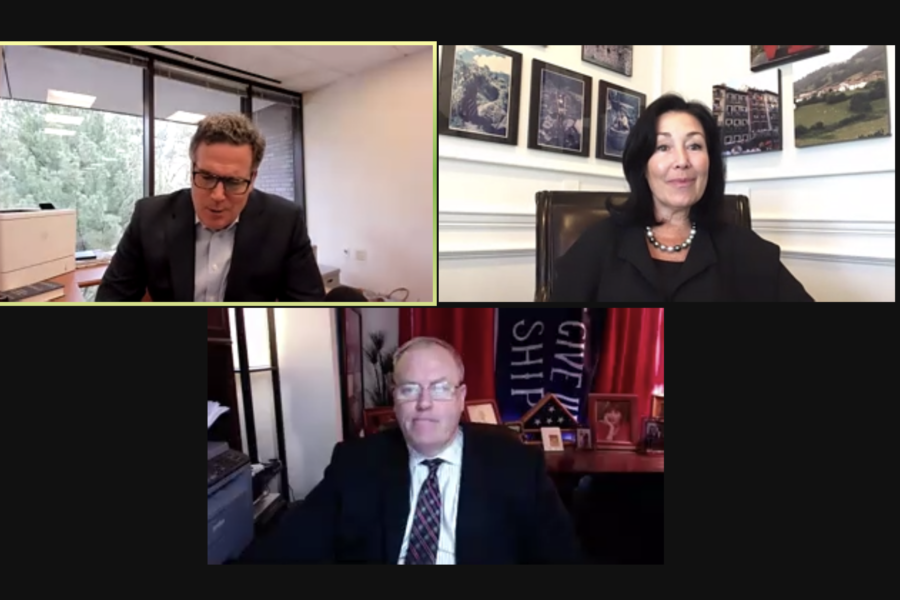 The United States’ slim lead over China in artificial intelligence is rapidly closing, and “urgent action must be taken” to preserve U.S. competitiveness, warned leading members of the National Security Commission on Artificial Intelligence.

“The fact of the matter is, we’re in a technological competition with a technological peer or near peer, and we can lose it,” said Robert O. Work, vice chair of the NSCAI, at a virtual Atlantic Council event April 29. “The Chinese have made the judgment that the way they will supplant the United States as the dominant global power is to pursue technology and become the world’s technological engine, which will then empower both their economy as well as their military.”

Work said AI is poised to reshape industry, U.S. policy, and national security and that the lines between commercial and military uses are blurred. Established by the 2019 National Defense Authorization Act, Work’s commission defines AI as “a constellation of technologies” with endless possibilities that will be incorporated into all future technology.

Safra Catz, a commissioner and also the Chief Executive Officer of Oracle Corporation, said only the United States and China “have the resources, commercial might, talent, and innovation ecosystems to lead the world in AI.”

As a result, she said, “This really forces us to consider who will determine the objectives, designs, and regulatory parameters for AI, and the broad definition of AI tools, decreasing cost of cloud computing, and new approaches to data, or expanding AI opportunities globally.”

In its 756-page final report, released in March, the commission outlined a “six-part technology stack” it used to determine the United States’ current lead over China. Of the six, Catz said the United States can claim a slight lead in hardware, algorithms, and talent, while China has the advantage in data, applications, and integration.

Catz said the United States leads the world in AI when it comes to chip design, but the U.S. is no longer the global power in semiconductor production. The U.S. lags behind Taiwan and South Korea, both allies, in leading-edge semiconductor manufacturing, and China, which has long aspired to catch up, is “heavily investing,” striving to meet its goal of becoming the world’s biggest chip maker by 2030.

Work said the U.S. military is preparing for future digital combat, noting the Joint Artificial Intelligence Center now reports to the deputy secretary of defense—as the commission recommended—and that DOD now has a chief data officer charged with developing an AI strategy for the whole department.

“I believe that the department really now is starting to gain momentum. I think we’ve lost time. I would like to go faster,” Work said. “There’s a lot of competing priorities within the Department of Defense, but I think we’re getting there.”

Catz said U.S. firms and academia lead the world in developing AI algorithms, but the trend toward sharing those technologies as open-source software means “China is rapidly closing this gap and could overtake the U.S. and AI algorithm development in as soon as five years, maybe 10.”

China leads in applying the technology and has proven itself capable of applying AI at scale, “particularly for mass surveillance in ways that are, of course, antithetical to our values.”

As for talent, the United States regularly attracts the top AI talent in the world, but many of the people are not able to become U.S. citizens. “China is the largest source of AI talent, and it’s improving retention, and they are aggressively recruiting talent from the U.S. and around the world,” added Catz.

In order to become AI-ready by 2025—an aggressive goal set by the commission—the Defense Department should invest about $8 billion a year in AI research, which Work said amounts to about 8 percent of DOD’s research and development budget.

DOD should also get better at identifying computational talent. The commission recommended adding a section to the Armed Services Vocational Aptitude Battery for computational thinking to discover talent early on. Doing so, Work said, would let the Pentagon create “a designator that we could track and start managing our workforce in a better way.”

The commission’s vision is about “having the department embrace AI as kind of the fundamental technology,” Work said. “They have to get it right if they’re going to win on a future battlefield.”