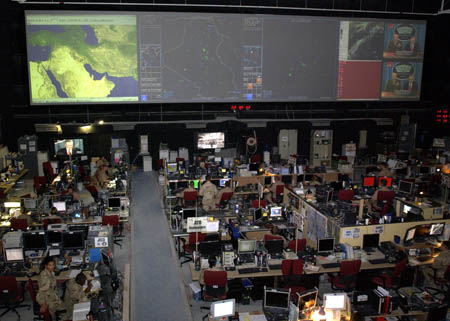 Air Force has abandoned plans to consolidate air and space operations centers in Arizona and Florida that were targeted under the Pentagon’s efficiency initiative. USAF will forge ahead with plans to merge US Air Forces in Europe’s 603rd AOC and 17th Air Force’s 617th AOC collocated at Ramstein AB, Germany, but the 601st AOC at Tyndall AFB, Fla., and 612th AOC at Davis-Monthan AFB, Ariz., will remain separate. “During the detailed work and analysis . . . an enterprise-wide option emerged that is both more efficient and effective for operational command and control,” stated Maj. Gen. John Hesterman, USAF’s assistant chief of staff for operations, plans, and requirements. “Not only does this new option make the consolidation of the 601st and 612th AOCs unnecessary, it also achieves the savings target identified by the Secretary of Defense,” explained Hesterman in a letter to Congressional representatives, Tuesday. Lauding the decision were Rep. Gabrielle Giffords (D-Ariz.) and Rep. Steve Southerland (R-Fla.), in whose Congressional districts Davis-Monthan and Tyndall are located, respectively. They said it spares roughly 600 jobs between the two bases. Air Force officials will unveil the alternative scheme in USAF’s Fiscal 2013 budget request. (Giffords release) (Southerland release)