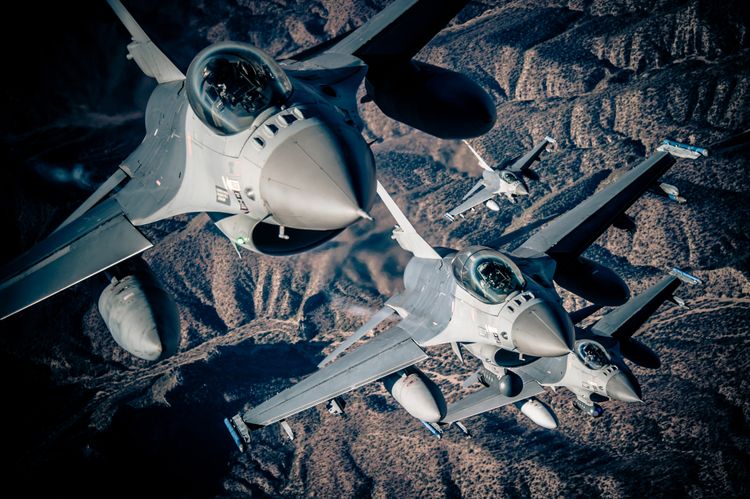 The Air Force has chosen Northrop Grumman over L3 Harris to develop a Next Generation Electronic Warfare suite for the F-16 which, if development succeeds, could equip as many as 450 Vipers under a program potentially worth $2.5 billion, Northrop and service officials said Jan. 11.

The development contract, worth about $250 million, was actually awarded in November 2020, but the announcement was held until the start of calendar 2021. Because development is not yet complete, there’s been no decision made about whether it will be fielded, and for the same reason, the NGEW has not yet been assigned a nomenclature.

The system will defend F-16s from “radio frequency-guided weapons”—radar-guided missiles—by detecting, identifying, and defeating RF threats in an “increasingly contested environment,” the company said in a press release. It will offer advanced countermeasures and “also has proven pulse-to-pulse operability with the F-16’s newly-acquired AN/APG-83 Scalable Agile Beam Radar,” or SABR, also built by Northrop, the company said.

It’s “a fully integrated EW suite—a jammer plus Radar Warning Receiver built into the aircraft—that can meet the challenge of detecting and countering complex threat emitters,” an Air Force official said. If successfully developed and fielded, it will replace “an analog version of a legacy RWR and several legacy jammers,” he said. The system is more comparable to the Eagle Passive Active Warning and Survivability System (EPAWSS) for the F-15 than a specific jamming pod like the ALQ-131, he said.

The NGEW is being developed as a Section 804 rapid-acquisition program—using congressionally granted “other transaction authorities”—in response to a 2017 study by the Office of the Secretary of Defense identifying a need for better EW capabilities for the F-16. In 2018, the F-16 System Program Office “led a market research effort that resulted in the selection of two vendors (from five) for competitive prototyping,” a service official said. These were Northrop and L3H. A competitive prototyping program began in September 2019, and Northrop won that competition in November.

The system is “being developed for the U.S. F-16 fleet but is leveraging some new technology from other U.S. programs,” the company said. Some of it derives from the ALQ-251 used on the Air Force AC/MC-130J fleet flown by Special Operations Command, and “shares some common technology” with the AN/APR-39 radar warning receiver. The system is a “scalable capability” and could be exported either as a pod or an internal system, a Northrop spokesman said.

If further development and flight test proves successful, an Air Force official said the system could begin fielding circa 2024, adding that it’s “too early” to discuss the rate of installs or when they might be completed.

The work will be done at Northrop’s Rolling Meadows, Ill., facilities and will “leverage other partners both inside and outside” the company. Northrop will “continue to team with non-traditional defense contractors for the execution” of the project, the company said in a press release.

“This system draws on the best of our experience from multiple programs to create an effective and affordable solution to keep the Viper relevant throughout its service life,” said Ryan Tintner, Northrop VP for navigation, targeting and survivability. The EW suite will leverage “an open systems, ultra-wideband architecture for providing greater instantaneous bandwidth needed to defeat modern threats.” The NGEW is part of a “mature product line of electronic warfare capabilities that can be adapted to protect virtually any platform or mission requirement.”