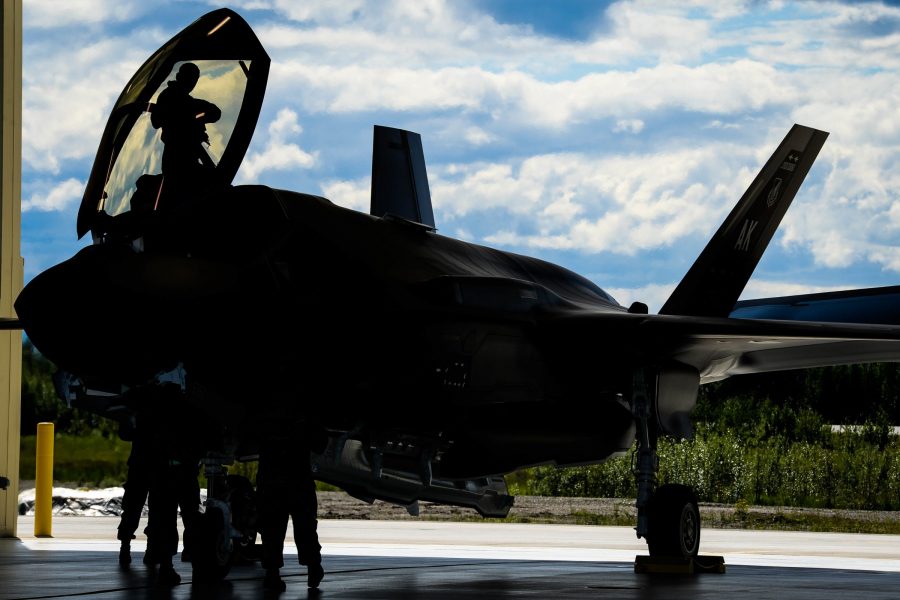 Next F-35 Contracts Under Negotiation, Deal Expected by Late September

The F-35 Joint Program Office, Lockheed Martin, and Pratt & Whitney are negotiating prices for the 15th through 17th lots of Lightning II fighters and engines, aiming for a deal by the end of September.

The contracting strategy is to negotiate a “base year” contract for Lot 15, with “two single-year options (Lots 16 and 17),” a JPO spokeswoman said. While the air vehicles are under negotiation, the “propulsion Lot 15-17 proposal is currently in technical evaluation,” the spokeswoman said. Although Lockheed quotes prices publicly for F-35s with engines included, the government negotiates with the engine maker separately. The Lightning II is powered by Pratt’s F135 turbofan.

The strategy likely buys time for the F-35 to finally exit engineering and manufacturing development and be declared ready for full-rate production, a milestone postponed last month for the third time by former Pentagon acquisition and sustainment chief Ellen Lord.

The Lot 15-17 contracts will also mark the first major deals for the F135 engine conducted with Pratt under the ownership of Raytheon Technologies, which formally took over the engine maker in April 2020. Pratt was previously owned by United Technologies.

The program office expects to conclude both the air vehicle and propulsion talks within fiscal 2021, the spokeswoman said. Lot 15 air vehicles “are planned to be fully funded and awarded in FY’21,” but the Lot 16 and 17 options would be exercised in fiscal year 2022 and 2023, respectively, “when funding becomes available.”

The Lots 15-17 contracts were originally expected to include a multi-year “block buy” agreement including the U.S. However, by law, the U.S. cannot enter into a multiyear procurement arrangement for a weapon system until it has passed Milestone C, or full-rate production. The F-35 most recently was supposed to clear Milestone C in March, but Lord postponed that declaration until further notice, due to ongoing challenges integrating the F-35 with the Pentagon’s Joint Simulation Environment—a wargaming system that helps Pentagon leaders decide on optimum force sizes for various weapon platforms. Lord’s move leaves it up to the Biden administration to declare whether and when the F-35 is ready for full-rate production.

When the Lot 12-14 contract was announced in October 2019, Lord said the F-35 had completed 90 percent of the tasks necessary to pass Milestone C.

U.S. partners in the F-35 program are already participating in a “block buy” arrangement with Lockheed Martin.

The $34 billion October 2019 contract, which covered Lots 12-14, achieved Lockheed and the JPO’s longstanding goal of getting the unit cost of the F-35A below $80 million a copy. That contract, the largest yet for the fighter, included 478 aircraft; 291 for U.S. military services and 127 for foreign users. It also marked a 12.8 percent drop in the price of the Air Force version of the Lightning II over Lot 11. Engine costs had only declined 3.5 percent versus the previous lot.

Lots 15-17 will likely involve a slightly larger number of aircraft.

Industry officials said they expect smaller cost reductions in the F-35 from now on, as the production line is nearly at capacity and peak efficiency. The 2019 contract was the “big bang” deal, said one, in which Lockheed “pushed it” to get the unit cost below $80 million. At that price, the fifth-generation F-35 costs less than fourth-generation types like the F-15EX, but its operating cost remains significantly higher.

Lockheed missed its delivery quota of F-35s in 2020 by about 20 airplanes, due to delays incurred by the COVID-19 pandemic. Michele Evans, former Lockheed aeronautics vice president, said in the fall the company expects to gradually make up those missed deliveries by around 2023, noting it did not want to disrupt the production enterprise for a brief surge to get back to par.