Skip to content
The Department of the Air Force now boasts a software ecosystem of 17 innovation hubs and software factories under one platform across the United States. Courtesy illustration.
Expand Photo 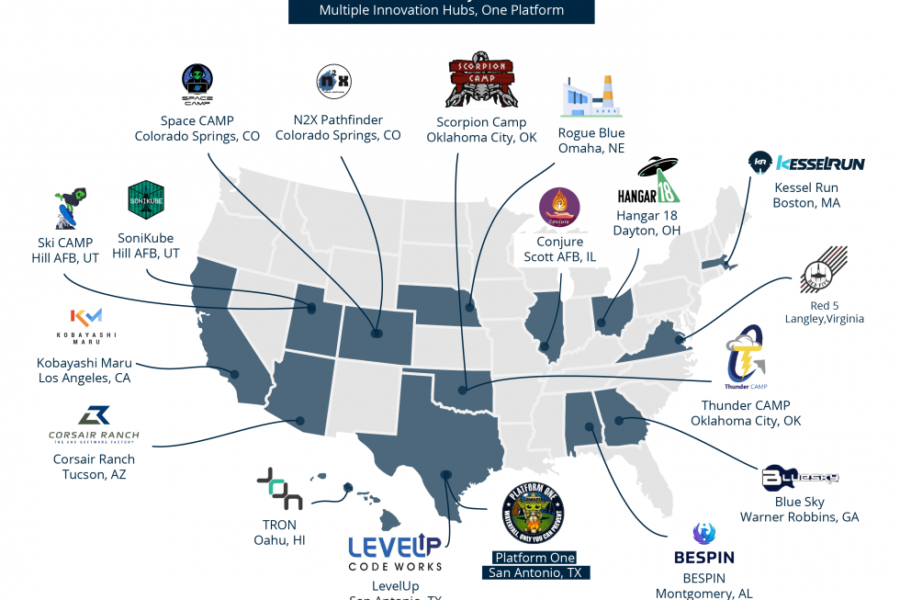 The Air Force stood up its first software factory, Kessel Run, in 2017 with the aim of coding just like the commercial tech industry.

Five years later, the department has 17 different software factories, each focused on developing in-house products for different missions. The newest, Hangar 18, wants to help with the Air Force Research Laboratory’s digital transformation and to contribute to its low-cost attritable aircraft program, the new factory’s director said in an interview.

Then-chief software officer for the Air Force Nicolas M. Chaillan officially designated Hangar 18, based out of Wright-Patterson Air Force Base, Ohio, back in September 2021. But the spark for the factory’s creation started months earlier.

Matthew Jacobsen, a member of AFRL’s HyperThought development team, was talking with an old colleague, Tim Strange, when Strange asked a simple question about the various software teams that call Wright-Patterson home.

“‘You guys have so much success as an individual team, through all these other teams. And … what would a collaboration look like?’” Jacobsen recalled Strange saying. “So he and I worked together. And he helped us bring together a bunch of teams from around Wright-Patt,” including from the National Air and Space Intelligence Center, from AFRL’s Aerospace Systems and Sensors directorates, and from the Air Force Institute of Technology.

None of the assembled teams had any experience with a software factory. But in talking, leaders identified Jacobsen’s team within the AFRL’s Materials and Manufacturing Directorate and AFIT’s Cybersecurity Technical Center of Excellence as two that had the right focus and experience.

“We spent a week whiteboarding out who’s doing what and who’s forward leaning enough to do this crazy thing called a software factory,” Jacobsen said.

Rather than seeking recognition as a software factory right away, the teams decided to take time and determine what kinds of projects they hoped to take on. Throughout the summer of 2021, they met and worked to draft an OKR—Objectives and Key Results—document, similar to a charter.

“We spent the summer with our teams in front of whiteboards saying, ‘What are we really good at? What are our core competencies? What can you bring to the table, and who do we want to target inside this market?’” Jacobsen said.

More specifically, Hangar 18’s leaders wanted to get involved in one program in particular.

“When we set out to do this, we said we want the attritables program to really benefit from what we’re working on,” Jacobsen said.

AFRL has been working on low-cost attritable aircraft for months now, describing it as an Off-Boarding Sensing Station unmanned aerial system and awarding contracts to General Atomics and Kratos. And as part of that program, Jacobsen said, leaders have tried to embrace some of the principles espoused by former Air Force acquisition czar Will Roper, who advocated for the service to own the underlying data and technology stacks in acquisition programs.

“We have key stakeholders in AFRL who are paying a lot of money for technology development, but they’re not sure how to get their arms around the data,” Jacobsen said. “They know they need to. They have great instincts where that’s concerned. They say, ‘We know there’s a lot of value in not just the physical product here and the manufacturing process, but also all the supporting data. So they turned to us and they said, ‘We need help with curation. We need help with modeling. We need help with exchange. We need help with preserving this whole digital footprint for OBSS. Can you do that?’”

For Hangar 18, that has meant integrating systems to ensure data can be easily transformed and shared as needed, using principles that Chaillan promoted as part of the software factory model, such as agile software development and DevSecOps, Jacobsen said.

Attritables aren’t the only project for the new factory, however. Hangar 18 has also been tasked with serving as the “execution arm” for the data line of efforts in AFRL’s digital transformation initiative. And as part of that process, the new organization did encounter some speed bumps.

“There’s no question that I think we faced a lot of skepticism early on—you know, yet another campaign or effort in the digital space,” Jacobsen said.

Hangar 18, though, already has two “government-owned, really high quality, production-grade systems living in cloud technologies” in its portfolio—Avolve, first developed by the Cybersecurity Technical Center of Excellence as a content-sharing platform for educational materials for air, space, and military professionals; and HyperThought, developed by AFRL as a content management system to “make data FAIR” (findable, accessible, interoperable, and reusable).

And over time, the factory has engaged in other projects to boost its value as a “force multiplier,” Jacobsen said, such as serving as a third-party watchdog and teacher for other parts of AFRL looking to develop software platforms.