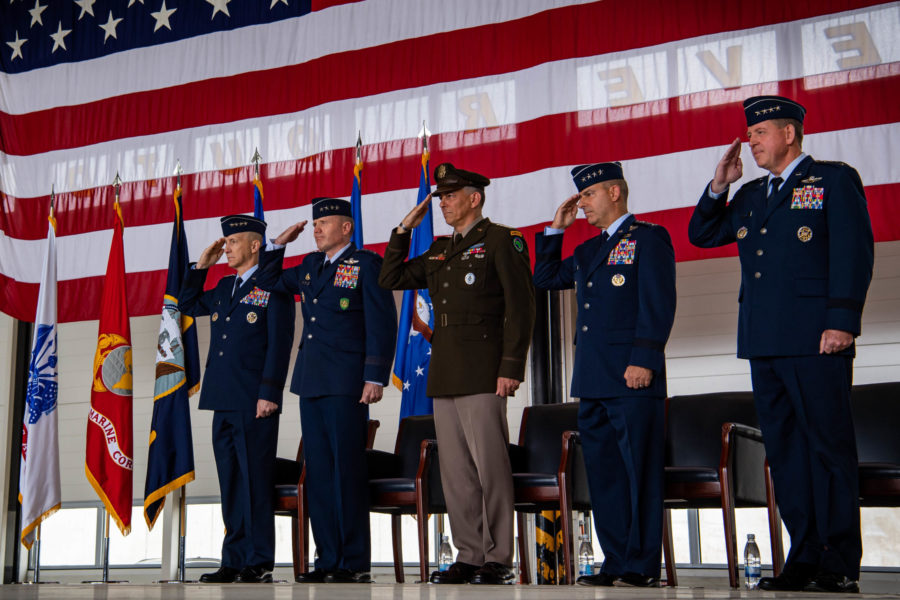 As Russia’s invasion of Ukraine grinds on and NATO looks to deter further aggression in Europe, a number of the top U.S. military leadership positions on the continent are changing hands in quick succession—starting with a change of command for U.S. Air Forces in Europe-Air Forces Africa.

Gen. James B. Hecker pinned on his fourth star, formally succeeding Gen. Jeffrey L. Harrigian in a ceremony at Ramstein Air Base, Germany, on June 27. The command change capped a rapid process that started with Hecker’s nomination just three weeks ago.

Now, he takes command of U.S. Air Forces in Europe-Air Forces Africa as well as NATO’s Allied Air Command at a pivotal moment. The U.S. has significantly increased its troop presence in Europe in response to Russia’s aggression, particularly along NATO’s eastern flank, and that’s resulted in a high operations tempo for USAFE personnel. USAF Vice Chief of Staff Gen. David W. Allvin noted during the change of command ceremony that over the past few years, the major command has been involved in thousands of enhanced air policing sorties and tens of thousands of hours of missions devoted to intelligence, surveillance, and reconnaissance.

And in his first remarks as commander, Hecker indicated that he would continue to bring a fierce focus on China, which the Pentagon has repeatedly called the U.S.’s “pacing challenge,” but most immediately on Russia.

Recalling his first assignment at Holloman Air Force Base, N.M., in the early 1990s, Hecker said he and his colleagues were primarily focused on the former Soviet Union.

“That’s what we concentrated on 24-7, 365,” Hecker said. “Any free time that we had, we spent in the vault studying our adversary. And we knew everything about that adversary. We knew the airplanes they flew. We knew their capabilities. We knew how they thought. We knew who their leadership was. …

“It’s time to get back to that. Because we took a little timeout for 30 years and hung out in the Middle East. And our adversaries caught up to us a little bit. Our national security strategy talks about making sure that we’re ready for the strategic competition, particularly China and Russia. … Recent events … make us need to concentrate more on Russia. And that’s what I can guarantee you that we’ll do here at USAFE-AFAFRICA.”

“As we all know, we are in challenging times,” Wolters said, referring to Russia’s invasion of Ukraine. “And for this command, and all of EUCOM and all of NATO, our charter is to ensure that we don’t start a war with Russia on Ukrainian soil. And more importantly, it’s to ensure that we do everything within our power to protect every single inch of NATO territory. And our third objective is to make sure that we’re going to do everything within our power to support Ukraine. And I don’t know of one Airman that exists in this United States Air Force that is more qualified to embrace those strategic tasks and achieve success” than Hecker.

Wolters will be working alongside Hecker for only a few days. Army Gen. Christopher G. Cavoli was confirmed by the Senate to be Wolters’ successor on June 24, and that change of command ceremony is scheduled to take place July 1. Cavoli, who previously served as commander of U.S. Army Europe and Africa, formally handed over that role June 28 to Gen. Darryl A. Williams in another change of command ceremony.

Wolters, meanwhile, is poised to retire alongside Harrigian. The two have known each other since the beginning of their careers, they said, and Wolters called Harrigian “the most outstanding field leader that we’ve seen in these United States Air Force in 37 years,” praising his leadership through the COVID-19 pandemic, the military’s withdrawal from Somalia, the noncombatant evacuation out of Afghanistan, and the most recent conflict in Ukraine.

Harrigian, for his part, reflected on his tenure at USAFE-AFAFRICA by saying he “left it all on the field” and thanking Airmen for their service during such key moments.

“We had multiple opportunities to make a difference, to put our stamp on history. You, all of you, did just that. And you did it not once, but you did it multiple times. I want to thank you for what you do each and every day. I’m proud to have been a part of your team,” Harrigian said.