Skip to content
William LaPlante, nominee to be Under Secretary of Defense for Acquisition and Sustainment, testifies to the Senate Armed Services Committee during his confirmation hearing on March 22, 2022. Screenshot.
Expand Photo 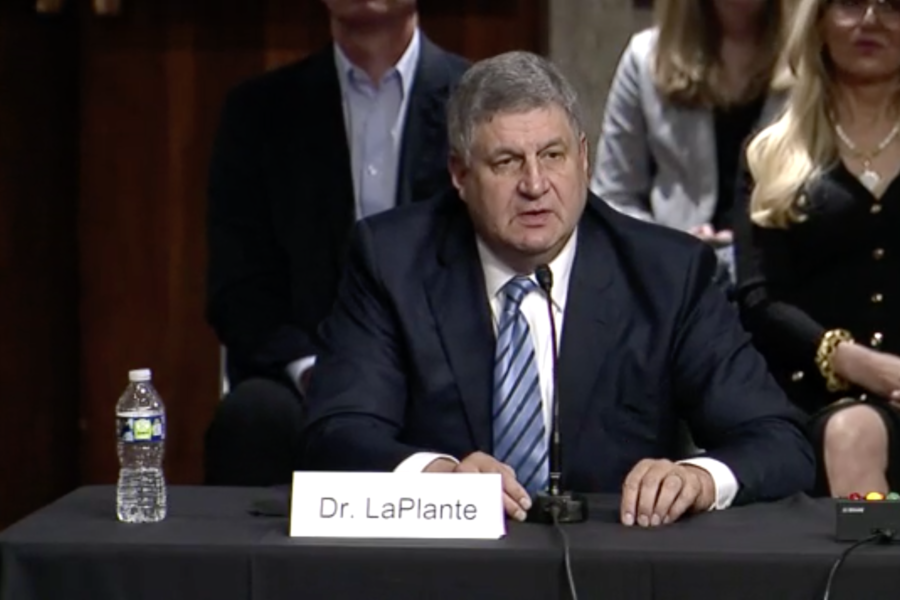 The Pentagon’s newly installed acquisition czar is planning “deep dives” into efforts to modernize each leg of the nuclear triad, starting with the program he views as having the most significant risk—the LGM-35A Sentinel intercontinental ballistic missile, known until recently as the Ground Based Strategic Deterrent.

William LaPlante, who was confirmed as the undersecretary of defense for acquisition and sustainment in early April, has only been on the job a few weeks. But in testifying before the Senate Armed Services strategic forces subcommittee May 4, LaPlante was prompted by Sen. Angus King (I-Maine) to offer first impressions of the Sentinel ICBM program’s progress.

Noting that it has been several years since he conducted a “deep dive into the program,” LaPlante went on to say that of the nuclear modernization efforts ongoing—including the B-21 bomber and the Columbia-class submarine—Sentinel, or GBSD, still has the furthest to go.

“They’re somewhat early—one or two years into the engineering, manufacturing, and development—trying to get to a first flight,” LaPlante noted. “I would say, of the three legs and where they are in their EMD, they’re the earliest along, so that means there’s still a significant risk.

The Air Force has pushed forward with the Sentinel program over the past several years, despite some external opposition, with officials repeatedly saying the current land-based portion of the triad, the Minuteman III, cannot be extended any further without risking the credibility of the intercontinental ballistic missile force.

That push continues in the service’s fiscal 2023 budget request. The Air Force is asking for $3.6 billion for the Sentinel program, along with $444 million in military construction to support the program’s infrastructure. As of now, the plan is for the program to reach initial operational capability by 2029.

Any delays to that timeline—or delays to any of the other ongoing modernization efforts—will have real-world impacts, Adm. Charles “Chas” A. Richard, head of U.S. Strategic Command, warned the Senate panel.

“Weapons program delays have driven us past the point where it is possible to fully mitigate operational risks,” Richard said. “In some cases, we’re simply left to assess the damage to our deterrent. Further programmatic delays, budget shortfalls, or policy decisions to lower operational requirements to meet infrastructure capacity will result in operational consequences.”

Already, Richard warned, the U.S. has a “deterrence and assurance gap against the threat of limited nuclear employment.” That issue, Richard said, has been highlighted in recent months by Russia’s invasion of Ukraine and threats to use low-yield nuclear weapons; and by China’s “strategic breakout” in rapidly and massively upgrading its nuclear arsenal.

Facing those threats, Richard called for reconsideration of “a low-yield, non-ballistic capability that does not require visible generation,” referring to the Sea-Launched Cruise Missile-Nuclear program that was recently canceled by President Joe Biden’s administration.