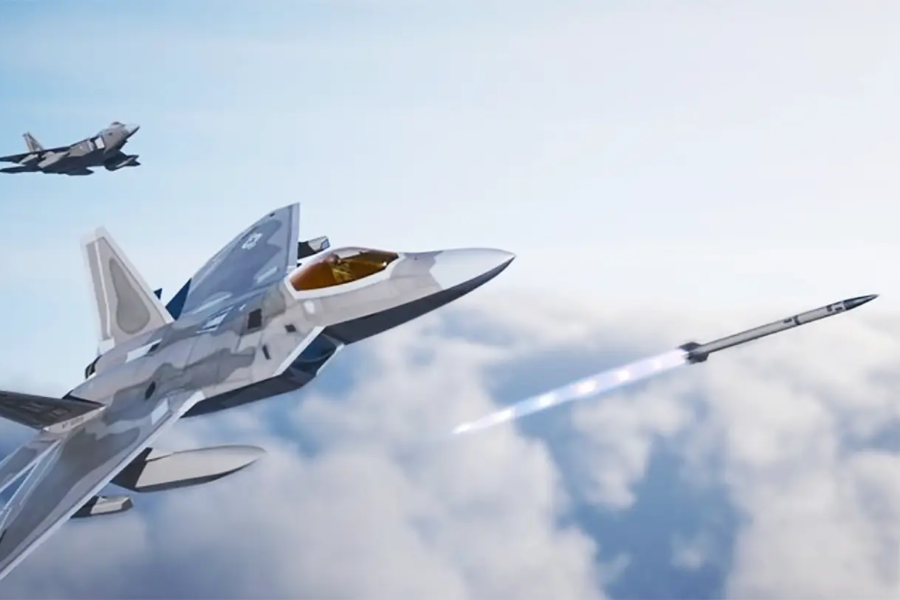 An artist’s concept of the Lockheed Martin F-22, posted on Instagram by Gen. Mark D. Kelly, head of Air Combat Command, offers an official glimpse of new capabilities for the Raptor, including a possible first look at the highly classified AIM-260 Joint Advanced Tactical Missile.

The image, released April 27, portrays three F-22s flying in formation, each carrying what appear to be stealthy extended-range fuel tanks and slender outer wing pods with a chiseled aperture at their leading edges. In the picture, one of the F-22s has launched a missile, which is neither an AIM-120 Advanced Medium-Range Air-to-Air Missile nor an AIM-9X Sidewinder, the two air-to-air missiles known to be qualified for the fighter.

The tanks seem to be the same ones described in new Air Force budget documents, while the pods are likely to be an infrared search and track and/or electronic warfare system. The only new missile publicly identified for the F-22 is the JATM.

The Air Force has spent more than $12 billion to continually upgrade the F-22 since production of the fighter ended in 2010. Revelations such as Kelly’s image usually precede new systems operating where they can be seen publicly.

Kelly did not comment on the new features of the F-22 shown in the artwork. The post accompanying the image noted that the 15th anniversary of the first 12-minute airshow demonstration of the F-22, flown by demo pilot Paul D. “Max” Moga, now a brigadier general who is Commandant of Cadets at the U.S. Air Force Academy. Kelly noted that, at the time, the F-22 was the only operational fifth-generation fighter in the world and the first to combine “maneuverability, stealth, and supercruise” in a single airframe.

When asked if the artwork is meant to show new F-22 systems, an ACC spokesperson replied, “We need every combat platform to go farther, sense farther, and shoot farther. This illustration is simply an artist rendering of an F-22 aircraft with any number of future capabilities.” The comment obliquely confirms that the illustration shows range-extending fuel, sensors, and weapons.

Images of an F-22 flying with the new outer-wing pods have circulated on the internet in recent weeks, taken near Lockheed’s Palmdale, Calif., facility, home of its Skunk Works advanced development shop. The Air Force has previously declined comment on what they might be. Asked recently about the pods and other images that show F-22s, F-35s, and F-117s flying with highly reflective silvery appliques, Chief of Staff Gen. Charles Q. Brown Jr. answered only, “They’re for test.”

While external stores seem counter to the idea of radar low observability—and the reason why the F-22, F-35, and F-117 carry weapons internally—Lockheed’s early 2000s proposal of an FB-22 bomber variant of the Raptor included stealthy external fuel tanks and stealthy outer-wing pods that could open and release a non-stealthy munition. The potential for stealth aircraft carrying stores externally while preserving their low observability thus dates back at least 20 years.

The Air Force’s justifications for the fiscal 2023 budget request identify the new fuel tanks as the Low Drag Tank and Pylon system (LDTP), which USAF calls a “critical capability” to maintaining air superiority. The new tanks and pylons extend the F-22’s range while preserving its “lethality and survivability,” USAF said. They allow the F-22 to fly supersonically yet stealthily, but can also be jettisoned using “smart rack pneumatic technology,” apparently producing a stealthy-smooth surface after the tanks have been released.

The F-22 has operated for many years with 600-gallon tanks—and is not stealthy while carrying them— but when released for dogfighting, the attachment surface is not smooth, thus worsening the F-22’s radar cross section.

Providing the F-22 with an infrared search and track (IRST) system has been an Air Force priority almost since the Raptor entered service, as such a system provides an important way to spot an adversary whose radar cross section has been reduced.

In 2017, Lockheed F-22 program manager Ken Merchant told Air Force Magazine, “We really don’t have the real estate” inside the F-22 for a system like the F-35’s electro-optical targeting system, or EOTS, noting at the time, “we’re looking at other options.” Due to secrecy, Merchant could not say more.

Because an IRST couldn’t go on the F-22’s nose or under the chin of the aircraft—as they are on most fighters that have them—the two pods would provide full coverage to the front, as well as expanded capability to the sides.

It’s also likely that the pods have some kind of electronic warfare function. Lockheed’s “Legion Pod” IRST, which has flown on the F-15, has considerable unused internal space that the company has said could be used for other sensors, functions, or fuel. In fact, company literature mentions that the Legion Pod has “other sensors” but doesn’t describe them.

The Navy signaled in its fiscal 2023 budget request that it is reducing the size of its F/A-18 Growler fleet, on which the Air Force depends for stand-in jamming, suggesting that USAF will meet that need in another way.

The JATM, the existence of which was first revealed at an Air Force Life Cycle Management Center industry conference in 2019, is also being developed by Lockheed Martin, and is set to begin replacing the AIM-120 AMRAAM sometime soon. When it was first mentioned, the Air Force said it would achieve initial operational capability in 2022. The JATM has been described by USAF officials as having sharply expanded range over the AMRAAM, to match or exceed the capability of newer versions of China’s PL-15, which outranges the AMRAAM and has diminished the F-22’s “first look, first shot” capability.

It’s also believed the JATM, which will be adopted by the Navy as well, has a multi-mode seeker, with both radar and infrared capabilities, with heightened resistance to jamming. Industry observers have speculated the missile will have a novel propulsion system, but the ACC artwork doesn’t show an air intake or unusual propulsive apertures, as on Lockheed’s “Cuda” advanced missile.

The artwork published by Kelly suggests the new missile will fit inside the F-22’s weapons bay, meaning it will not be appreciably larger than AMRAAM. The artwork may be deliberately misleading, however. The image also suggests a modular, “stacked” propulsion system, meaning the missile could be configured for longer- or shorter-ranged missions.

Air Force budget documents specifically say that the F-22 will make use of technologies developed for the Next Generation Air Dominance (NGAD) family of systems, and it is likely that the F-22, as USAF’s primary stealth air dominance craft, will also be a testbed for some of those technologies. Service officials have said that while the F-22 is slated to retire circa 2030, its capabilities will be updated to keep it dominant until it is replaced by the NGAD.

ACC is also planning to put capability in the F-22 for a helmet-mounted cuing system, but the new F-22 art isn’t detailed enough to show whether the pilot portrayed in the fighter is wearing such a helmet.

The ACC comment that the artwork shows “any number” of new capabilities also hints that there may be more in the image than meets the eye. The silvery appliques that Brown referred to as being tested on the aircraft might be new stealth materials that would be concealed by the F-22’s special low-visibility paint. The image may also reveal new apertures for side-looking sensors on the fuselage and wings.

The Air Force is asking Congress to let it retire 33 of its oldest F-22s in fiscal 2023, saying the jets would cost too much to upgrade to the latest combat configuration; Air Force Secretary Frank Kendall pegged that cost as $50 million apiece, or about $1.65 billion, during testimony before the Senate Armed Services Committee this week.

AFA’s Mitchell Institute for Aerospace Studies argues that the F-22s, though destined for retirement in seven years, should get the upgrades.

Kendall said he wants “‘first and foremost, to deter any act of aggression, and if necessary, defeat it,’” said retired Lt. Gen. David A. Deptula, dean of the Mitchell Institute.

“The most cost-effective move the Air Force could make today to increase the quality of its force to meet the China threat is to upgrade the 33 Block 20 F-22s to match the rest of the F-22 force,” Deptula said. “NGAD will not be available in any meaningful quantity for over a decade.”

Quoting Kendall as saying he wants to get “‘as much quality into the force as I can, as fast as I can,’” Deptula said adding the older F-22s to the update would “provide an additional squadron of the world’s most effective fighters to our Air Force.”