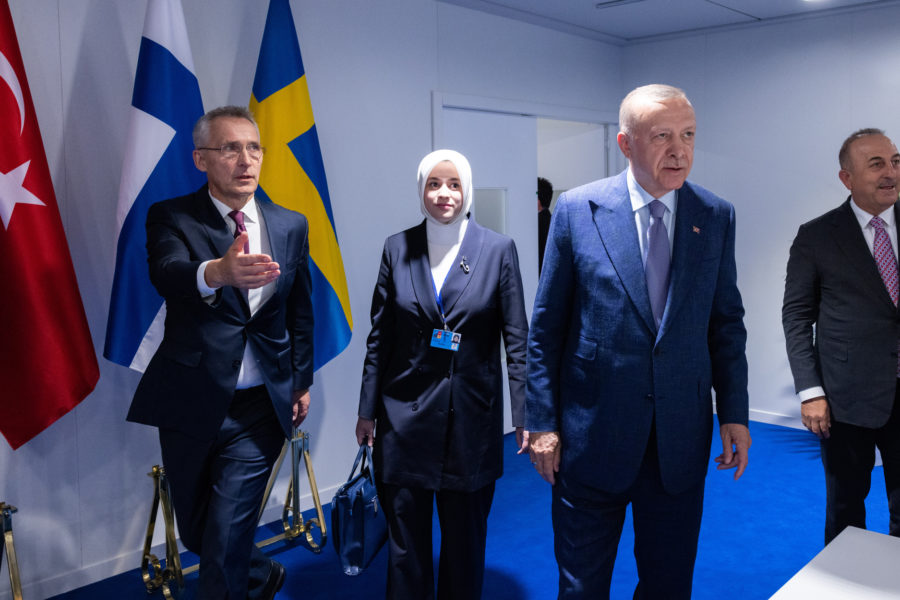 Turkey has agreed to allow Sweden and Finland to join NATO after early negotiations at the Madrid NATO Summit on June 28. President Joe Biden and Defense Secretary Lloyd J. Austin III are attending the summit.

The early breakthrough, announced on NATO’s website and detailed by The Associated Press, means Sweden and Finland will meet Turkish demands to lift defense embargoes against Turkey and will take steps to extradite alleged terrorists. Turkey considers members of the opposition PKK group to be terrorists.

The accession of Finland and Sweden, who formally applied to join NATO in May, had been an open question going into the summit after Turkey resisted.

Turkey’s list of demands for ceding to the ascension also previously included lifting its ban on participation in the F-35 program, which was imposed after Turkey purchased and deployed the Russian S-400 missile defense system. Biden and Turkish President Recep Tayyip Erdogan met earlier in the day, but details of their meeting were not made public. No public announcement was made regarding Turkey’s desire to rejoin the program.

Once the 30 NATO members vote to formally invite Finland and Sweden to join the alliance, they could become members in a matter of months.

The move to formally invite Finland and Sweden to join the alliance means leaders can focus on decisions to expand NATO’s high readiness force and to include China in the alliance’s new strategic concept. They were also expected to agree to more defense assistance for Ukraine.

“We will transform the NATO Response Force and increase the number of our high readiness forces to well over 300,000,” Stoltenberg said at a June 27 press conference prior to the start of the summit.

The expansion of the multi-national land, sea, air, and special forces NATO Response Force (NRF) from 40,000 to 300,000 will include more pre-positioned equipment and forward-deployed capabilities, including air defense, stronger command-and-control, and upgraded defense plans.

“Together, this constitutes the biggest overhaul of our collective deterrence and defense since the Cold War,” Stoltenberg added.

Troops will exercise together and familiarize themselves with local terrain, facilities, and pre-positioned stocks in order to more rapidly respond in the event of an emergency, he added.

The larger readiness force will be coupled with an expansion of NATO’s battlegroup presence on the eastern flank up to brigade levels. The battle groups, expanded to approximately 9,640 troops just prior to Russia’s invasion of Ukraine in February, are located in Bulgaria, Estonia, Hungary, Latvia, Lithuania, Poland, Romania, and Slovakia.

To pay for the upgrade, Stoltenberg said nations are meeting the goal to reach a defense spending target of 2 percent of their gross domestic products (GDP) by 2024.

In a report released by NATO on June 27, nine nations had already met the target, and 19 more were on track to do so by the target date. The remaining countries had “concrete commitments to meet it thereafter,” Stoltenberg added. Summit host Spain spends just 1.01 percent of its GDP on defense, but Spain participates in Baltic air policing and NATO’s training mission in Iraq, and it hosts U.S. and NATO battleships in its southern port city of Rota.

Those NATO countries that meet the 2 percent threshold include Croatia, Estonia, Greece, Latvia, Lithuania, Poland, the Slovak Republic, the United Kingdom, and the United States.

By year’s end, NATO members will have spent an additional $350 billion on defense since the benchmark was established in 2014.

Stoltenberg said a principal goal of the Madrid Summit is the creation of a new NATO Strategic Concept.

“I expect it will make clear that allies consider Russia as the most significant and direct threat to our security,” he said.

Alongside Spanish Prime Minister Pedro Sanchez, Stoltenberg said June 28 that the so-called Madrid Strategic Concept will be a “blueprint for NATO in a more dangerous and unpredictable world.”

“We will agree [on] a fundamental shift of our deterrence and defense with more high readiness forces, with more forward defense, with more pre-positioned equipment,” Stoltenberg explained.

For the first time, China will be part of that strategic concept, identifying how China and its rapidly growing military pose challenges to NATO’s security, interests, and values.

Ahead of travel to the summit, Austin spoke by phone with the Baltic nation defense ministers of Estonia, Latvia, and Lithuania.

According to a readout from acting Pentagon press secretary Todd Breasseale, “The leaders shared concern over Russian threats against Allies and consulted on plans to enhance deterrence and defense on NATO’s Eastern Flank.”

Stoltenberg also said the alliance would be working on a comprehensive assistance package for Ukraine. While NATO itself has not directly provided assistance to Ukraine in its war with Russia, the NATO allies have done so, through a coordination center in Germany operated by U.S. European Command and promoted by Austin through monthly meetings of the Ukraine Defense Contact Group, which now includes more than 50 nations.

In recent weeks, U.S. defense assistance to Ukraine has reached $6.5 billion and now includes High Mobility Artillery Rocket Systems (HIMARS). President Biden has promised to meet Ukraine’s request for new air defense systems, but no new announcement has yet been made.

NATO leaders will conclude their Madrid Summit on June 30.