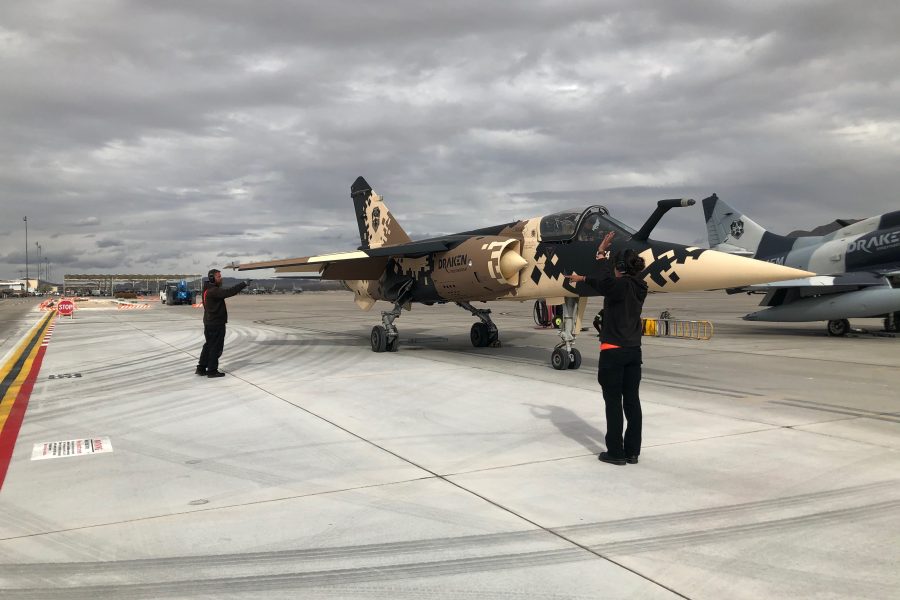 Nahom: F-35s Must be the Aggressors at Nellis and JPARC, Contract AdAir Not Enough

“What we’re finding, now … is these contracts aren’t very effective at Nellis at the high-end training environment,” Lt. Gen. David S. Nahom, deputy chief of staff for plans and programs, told the Senate Armed Services Committee on May 17. “What they provide is not giving us what we need.”

Draken International has the adversary air contract for Nellis. The current contract, let in 2018, is for $280 million. Layoff notices from the company prompted Sen. Jacky Rosen (D-Nev.) to question Nahom on USAF’s plans, telling him she is “concerned” there will be an AdAir gap while the Air Force establishes an F-35 Aggressor capability, saying that “63 percent” of Aggressor hours are supplied by contractors. Rosen quoted to him his response to a query, received by her staffers, that USAF will perform AdAir “completely organically … while ACC builds an F-35 Aggressor capability. But timing of this growth and capability is yet to be determined.”

Nahom explained that, “five, six years ago,” the Air Force didn’t need a fifth-generation adversary aircraft, but China now fields such fighters, and that has increased the sophistication needed for sparring partners at USAF’s two marquee fighter training ranges.

“As the China threat has stepped up, we have to step up our replication,” Nahom said, “And, what the contractor’s providing there at Nellis … is not what we need … for that high-end piece that we get at the NTTR (Nevada Test and Training Range) … and JPARC in Alaska … [They] are the only two places that you get that high-end training anywhere in the world.”

He said adversary air companies “do wonderful work for the Air Force, especially at our Formal Training Units, or FTUs, where we train basic fighter pilots how to fly.” The work at the FTUs is sufficient—“the contracts are very effective”—and Nahom suggested that this work will continue.

“While the Nellis training range is a national treasure—and it’s very important that we obtain that high-end capability—there’s also a transition that our service is making to more and more virtual training,” Nahom added. “And it’s critical because a lot of things cannot be replicated in ‘real.’” He emphasized that while flying hours in real-world aircraft are critical, so is USAF’s investment “in a virtual simulation environment.” It will “ensure that our aircrews maintain that edge.”

Just a year ago, a Draken F1 crashed at Nellis, killing the pilot. Another F1, this one belonging to Airborne Tactical Advantage Company (ATAC), crashed at Luke Air Force in February, but the pilot ejected to safety. Two other contract AdAir accidents have occurred since 2018, but Nahom did not indicate that safety plays any role in USAF’s decision to bring high-end Aggressor work back in-house.

Draken, ATAC, and Tactical Air Support were awarded contracts in July 2020 worth up to $433.6 million to provide 5,418 annual sorties at five ACC bases. ACC envisioned contracting as much as $6.4 billion of adversary air work at 12 bases, including 40,000 hours of air-to-air and 10,000 hours of close air support work. It’s not clear how much of that work will not be awarded given ACC’s decision to make Aggressor work at Nellis and JPARC organic. Other companies authorized to bid on the AdAir work include Air USA, Blue Air Training, Coastal Defense, and Top Aces Corp.

An industry source said Draken was given only 60 days notice of the contract lapse, after the Air Force “led them to believe they would still be in high demand.” There is “no published Air Force vision” for AdAir or electronic warfare aggressors, he said, and the service will “struggle to find” enough training resources as a result of “its choice to drastically cut contract AdAir.”

This story was updated at 8:59 a.m. Eastern time July 5, 2022, to correct the state and party affiliation of Sen. Jacky Rosen.