Skip to content
The F135 engine pipeline has a cushion of only about 12 percent spare engines and modules, rather than the 25 to 30 percent needed. Airmen wheeled an engine out of a C-17 Globemaster III at Al Dhafra Air Base, United Arab Emirates, to repair an F-35A deployed there in August 2020. U.S. Air Force photo by Tech. Sgt. Charles Taylor.
Expand Photo 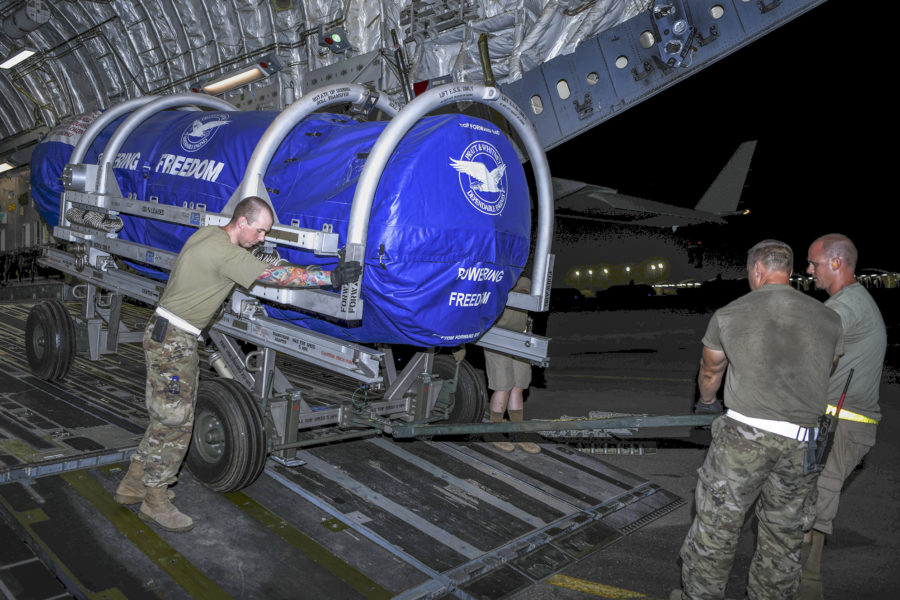 More than 40 F-35s across the U.S. Air Force are currently without engines according to the most recent data, top officials told Congress on July 13.

Speaking before the House Armed Services subcommittee on tactical air and land forces, acting Assistant Secretary of the Air Force for Acquisition, Technology, and Logistics Darlene Costello said 41 of the fifth-generation fighters don’t have an engine due to maintenance issues, while 56 F135 power modules are currently being repaired at Tinker Air Force Base, Okla. There are 272 F-35A jets in the Air Force’s inventory, meaning nearly 15 percent are without an engine.

Rep. Donald Norcross (D-N.J.), however, expressed discomfort about providing funds to buy more F-35s while a significant number of jets are already in the service in need of engines.

“The idea of rolling [out] a new aircraft with an engine while others are sitting—and I’m hearing the numbers and we can argue over which ones they are—but [that is] certainly something that is a real concern,” Norcross said.

Norcross was just one of several representatives to voice concerns about the F-35 program during the July 13 hearing, with others hitting on familiar topics of high sustainment costs and delayed production while discussing the 2022 budget request for fixed-wing tactical and training aircraft programs.

Rep. Mike Turner (R-Ohio) cited a Government Accountability Office finding that fewer than four percent of F-35 engines have been delivered on time, asking if the military was looking at alternative engine options to keep sustainment and operation costs down.

“Engine costs in sustainment are challenging,” Fick acknowledged, while also noting that no F-35 delivery has been delayed because of an engine. “And as we rapidly approach the 2,000-hour first scheduled engine removal, we will start to bear those costs in the sustainment of the air system. And we also know that we have begun to reach a flat or a flatter spot in the learning curve relative to the overall cost of production engines.

“When I couple that with the notion that post-the current Block 4 content, we will likely need increased power and increased thermal management capability from our propulsion system, I think that the need to look for options from a propulsion system perspective is present.”

In the meantime, Fick said, the joint program office is taking a three-pronged approach to close the engine gap, working to shorten repair time at Tinker, stand up repair operations at other facilities, and keep engines in planes longer.

For engine power modules in particular, Fick said, the program office now anticipates supply meeting demand by 2024, with the backlog being cleared by 2029.

The Block 4 upgrade, which the Air Force has said is key to ensuring the F-35 can win a peer fight, also came under scrutiny. Jon Ludwigson, director of contracting and national security acquisitions for the GAO, reiterated concerns from his office that the timelines attached to full production capability and the Block 4 have been too optimistic, setting up the program to miss deadlines. That, combined with supply chain issues and sustainment costs, “raise questions about how many aircraft can realistically be produced on time in the near term while supporting fielded aircraft,” Ludwigson testified.

Without Block 4, though, the Air Force decided not to add any F-35s to its 2022 unfunded priorities list, said Lt. Gen. David S. Nahom, deputy chief of staff for plans and programs. For every F-35 the service buys before the Block 4 upgrade, he said there will be a cost to retrofit with the new capabilities. And in certain cases, Ludwigson added, those retrofits could happen before the aircraft are even delivered to the Defense Department in the first place.

The question of just how many F-35s the Air Force will order in the near future remains open ended; Chief of Staff Gen. Charles Q. Brown Jr. has said the results of an ongoing tactical aviation study will determine if the service will surge its production of the jet. On July 13, Nahom told the subcommittee that he expects that study to be completed by the end of the summer.