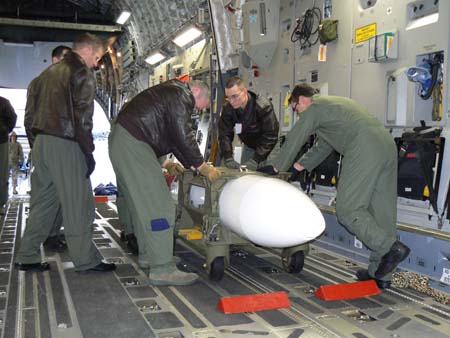 Air Force’s nuclear community just got a morale-boosting shot in the arm with the news that the 62nd Airlift Wing at McChord AFB, Wash., has passed its just-completed Nuclear Surety Inspection, receiving “the highest possible grade” of satisfactory. The C-17 wing, in addition to its daily duties of hauling routine cargo and personnel around the globe, serves as the nation’s primary nuclear airlift force, with responsibility for transporting nuclear weapons and associated equipment and persons, when called upon. “It’s nice to be recognized for doing a good job,” said Maj. Jeffrey Meyers, a flight commander with the wing’s 4th Airlift Squadron. He added, “Wing leadership has made it clear: Perfection is the standard.” The inspection took place from Jan. 7 to Jan. 12. The Air Force is beefing up nuclear inspections as part of its broader push to reinvigorate the nuclear mission and improve upon its nuclear stewardship that came under extreme public scrutiny last year after two high-profile, nuclear-related gaffes. Wings must receive essentially a perfect score to pass these nuclear inspections. This high bar caused several of the services’ ICBM and bomber wings to come up short last year, prompting retests. (Includes McChord report by TSgt. Oshawn Jefferson)