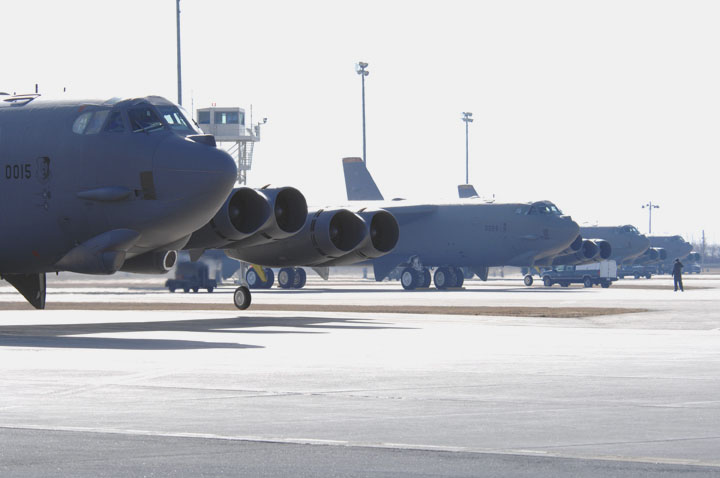 5th Bomb Wing at Minot AFB, N.D., did not shine in all areas of the nuclear surety inspection held at the base in mid May. The results leave the unit still shy of fully restoring its tainted reputation after last August’s errant transfer of nuclear armed missiles that led to it losing nuclear certification until March. Defense Threat Reduction Agency and Air Force inspectors visited the base for a week-long inspection starting May 16. While the findings of the inspection are classified, various news reports have said the wing received unsatisfactory grades at least for security breakdowns during mock attack drills. USAF representatives would not discuss the report, but did acknowledge that there were areas identified for improvement. Wing spokeswoman Maj. Elizabeth Ortiz, for example, said the inspection highlighted “training and discipline” as areas in need of a boost, the Associated Press reported May 30. Maj. Tom Crosson, Air Combat Command spokesman, told the Daily Report May 30 that an ACC inspector general team will return to Minot in 90 days to reassess the unit. Crosson would not confirm or deny any of the specific information in the press reports. ACC headquarters is providing expertise to assist the unit, he said. Meanwhile, the wing remains fully mission capable and certified to carry out its nuclear mission, he said, noting that he understands that the wing will incur no key personnel changes at this time. Crosson also stated that the IG also identified “a lot of strengths” in the wing during the most recent inspection. In fact, he said, the IG found that the wing “excelled in several areas,” including “a strong sense of teamwork and pride.” Col. Joel Westa, the wing’s current commander, focused on the positive that came out of the inspection in a May 29 release. “I am pleased that Minot AFB showed our character in this recent inspection and will continue to press forward as we continue to improve in all areas!” he wrote.