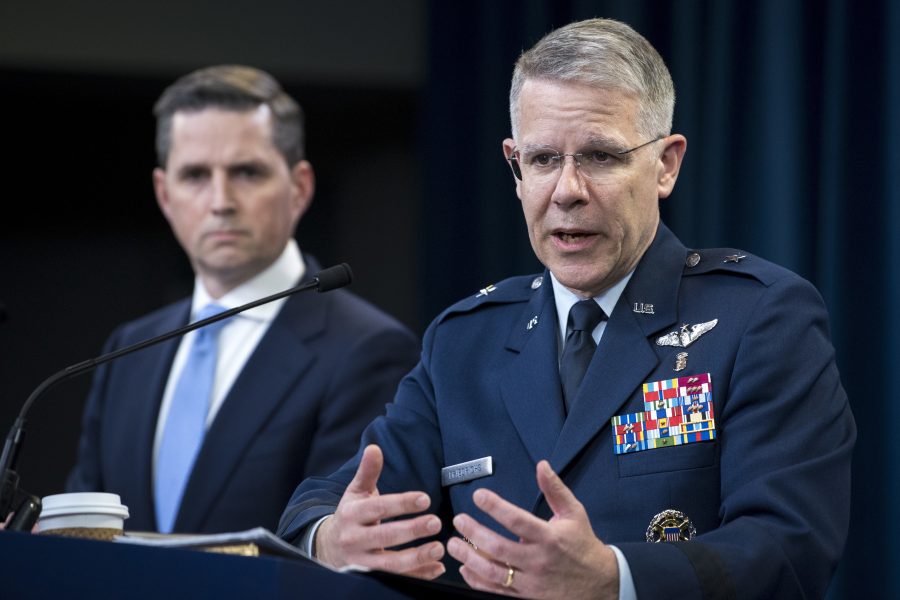 The number of military personnel and dependents who have tested positive for COVID-19, the disease caused by the new coronavirus, continues to climb as Defense Department officials plan possible next steps to bolster the national response while protecting its own ranks.

As of early March 16, there are 37 reported positive cases of COVID-19, including 18 military members, 13 dependents, three civilian employees, and three contractors. As of March 15, the military had conducted 495 tests for the virus globally, Brig. Gen. (Dr.) Paul Friedrichs, the Joint Staff surgeon, told reporters in a briefing.

The Air Force is monitoring two positive cases at Travis Air Force Base, Calif.; one Active Duty member who is a presumptive positive at Moody Air Force Base, Ga.; and a civilian employee who tested positive at Maxwell-Gunter Air Force Base, Ala. Headquarters Air Mobility Command at Scott Air Force Base, Ill., is limiting the number of personnel working by enhancing teleworking and staggering shifts, and the command has activated a planning team to implement “necessary measures to ensure the health and welfare” of the community, according to a release.

The Pentagon in recent days has halted all travel, domestic and international, for service members, civilians, and military families, though senior service officials can issue waivers. At the headquarters level, the bulk of Pentagon employees, including USAF personnel, are working from home. Senior officials are practicing intensive “social distancing,” with Defense Secretary Mark Esper and Deputy Defense Secretary David Norquist not working in the same room, and meetings are being held via teleconference, department spokesman Jonathan Hoffman said.

The military is even responding to the nationwide pressure on grocery stores, giving commissaries the authority to limit the sales of “high demand” items such as toilet paper and hand sanitizer, Hoffman said.

Operationally, more military exercises and movements are being limited. On March 16, U.S. Africa Command announced the cancellation of African Lion, a major training event that was scheduled from March 23 to April 4 in Morocco, Tunisia, and Senegal. U.S. European Command on March 16 also announced a further reduction to exercise Defender-Europe 20, with all personnel movement having ended March 13 and all related exercises, including the flying event Saber Strike, canceled.

So far, the department has not received additional requests for assistance related to the outbreak, following the Department of Health and Human Services call for housing of evacuated people in the early stages of the outbreak. The department is, however, cataloguing its capabilities to inform what options it can provide if called upon, Hoffman said.

“We are looking at a number of different options, resources, and what we can do,” Hoffman said. “A big benefit of the DOD is logistics, planning, and support.”

For example, the military has deployable hospitals ranging in size from 25-person tents to the massive floating hospitals USNS Mercy and USNS Comfort, and military base hospitals have limited bed space. However, these capabilities are limited in times of an infectious disease outbreak, such as what the country is currently facing, Friedrichs said.

Military doctors and hospitals, especially those that can be deployed quickly, are focused on combat trauma care. Tent hospitals and the majority of the space on the Mercy and Comfort are designed for stacked litters of patients, putting a lot of people in a small space for trauma care. This will not be productive to fight a disease spread as easily as COVID-19, Friedrichs said.

The military could call on Guard and Reserve doctors, nurses, and other healthcare professionals. However, this means that if they are called up to duty, they can no longer work as civilians in their own communities, which also need healthcare, Friedrichs said.

U.S. officials are running data that has emerged from hard-hit countries such as China, Italy, and South Korea to get an idea of how widespread COVID-19 is. The biggest concern is “this disease is very easily transmitted,” Friedrichs said. While it has shown to not harshly impact young people, such as the bulk of the Active Duty force, these service members could be carriers, so the DOD is trying to “limit the risk of spreading it to others,” he said.