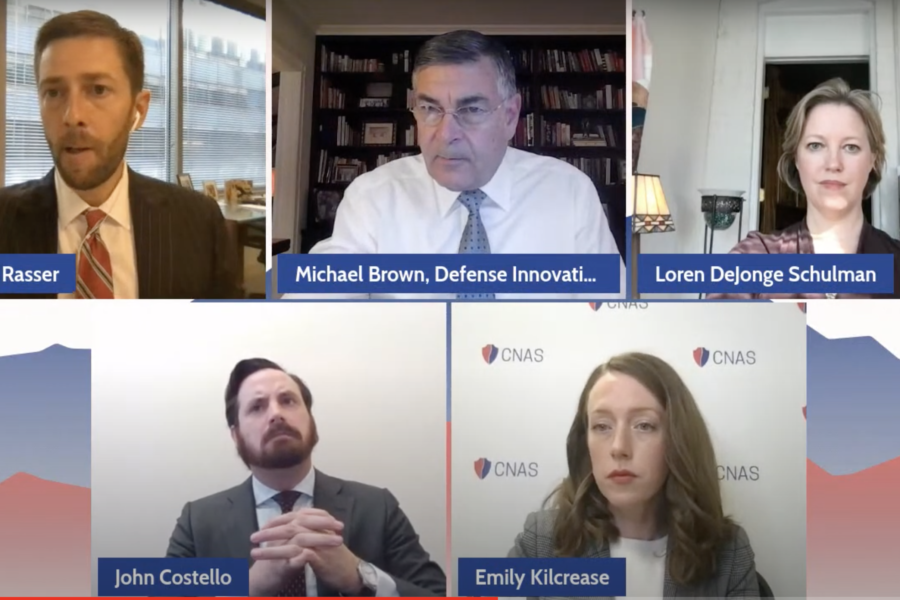 The Pentagon’s current efforts to add science and technology talent to its workforce are “insufficient,” especially as the U.S. seeks to counter China’s gains in the field, the director of the Defense Innovation Unit said Oct. 21.

Speaking during a virtual panel organized by the Center for a New American Security, Michael Brown said the Defense Department has a number of programs that bring in the people necessary to bolster its tech efforts, such as the Technology and National Security Fellowship and the Defense Digital Service. But those success stories “are too small relative to what we need for the challenge going forward,” Brown cautioned.

In particular, Brown said, the DOD has a tendency to staff key technology efforts with military officers who may not know the topic as well as civilian experts. At the DIU, which focuses on taking commercial technology and applying it in the military at speed, the goal is “to combine both the military officers that … we really select one by one, along with commercial technology executives,” Brown said. It’s a model he wants the department to follow in other key areas.

“We need to have more blended workforces in the areas of DOD that require that,” Brown said.

Brown is not the first to fault the Pentagon for placing officers in charge of technology programs despite having little expertise in the area. Nicolas M. Chaillan, who served as the Air Force’s first chief software officer, quit the service in dramatic fashion in September with a LinkedIn post that raised the same issue.

“Please stop putting a major or [lieutenant colonel] (despite their devotion, exceptional attitude, and culture) in charge” of technical projects affecting millions of users “when they have no previous experience in that field,” he wrote. “We would not put a pilot in the cockpit without extensive flight training; why would we expect someone with no IT experience to be close to successful?”

As for bringing in more civilians for a “blended” workforce, the Air Force and the broader DOD have to do a better job of recruiting, developing, and retaining talent, argued panelist Loren DeJonge Schulman, vice president of research and evaluation for the Partnership for Public Service.

Too often, DeJonge Schulman argued, government organizations’ solution to the talent gap is to create short-term fellowships or rotations whereby private-sector experts work in public service for a year or two, then leave. Such a concept was championed by former Air Force acquisition boss Will Roper in a recent Politico defense forum, where he advocated for “limited tours of duty” where “[innovators] could solve significant challenges and then easily go back to the private sector where their skills are refreshed.”

The problem with this approach, DeJonge Schulman said, is that it does not develop “sustainable talent models that we can imbue understanding of technology, technology acumen … so that you can actually build policy around them, but not inculcating those into the federal workforce.”

“[We need to be] thinking through, how do we invest in civil servants’ professional development, utilize those investments in order to bring them into roles that make sense for them, and then give them challenges and opportunities that meet the need in terms of, if you’ve created this incredible talent, if you’re not actually getting the opportunities to actually succeed and apply those talents, they’re going to want to leave,” DeJonge Schulman said.

Building up the federal workforce’s technology talent should form one prong in a national technology strategy, the panelists argued. Sen. Michael Bennet (D-Colo.) introduced an amendment in the Intelligence Authorization Act for Fiscal Year 2022 requiring the President to draft such a strategy, and he argued Oct. 21 that it is necessary to compete with China.

“We’re in a race with China for the 21st century, but unlike Beijing we have no idea where we want to go or how fast we’re going to get there,” Bennet said. “That doesn’t mean we should be copying them by picking national champions or imposing a ‘one size fits all’ approach, but it does mean we should act urgently to identify priorities, align federal policies and investments, and mobilize the nation in a coherent and enduring way.”