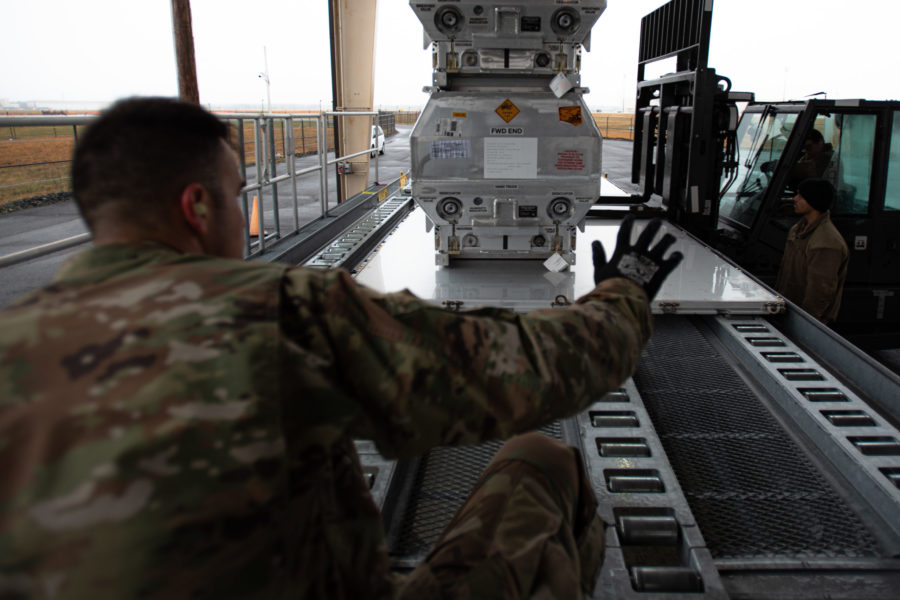 Long-Term Ukraine Aid to Be Discussed at Ramstein Meeting

“Stakeholders” from up to 40 nations will meet with Defense Secretary Lloyd J. Austin III at Ramstein Air Base, Germany, on April 26, to discuss how to deliver extended and more lethal aid to Ukraine, the Pentagon said.

The meeting is “not a NATO ministerial” but instead a gathering of those interested in providing aid to Ukraine in its resistance to Russia’s invasion, Pentagon Press Secretary John F. Kirby told reporters April 22. More than 20 nations have accepted the invitation, he said.

The European Union, Finland, Georgia, and Sweden have been among the entities invited to participate in recent NATO meetings discussing the war in Ukraine.

“One of the things that [Austin] wants” from the meeting is “the beginnings of a discussion with like-minded nations about long-term defense relationships that Ukraine will need going forward,” Kirby said.

“We obviously want to talk about what’s going on now. We certainly want to hear from … other nations about what they’re doing, in terms of immediate defense assistance, and how that might change,” Kirby said.

As the fighting in Ukraine enters “a new phase, … I think he also wants to take a longer, larger view of the defense relationships that Ukraine will need to have going forward, when the war is over.” This is an evolving issue and “that’s why we want to have the meeting,” Kirby said.

“Having more than 20 [nations] already agree” to attend “on relatively short notice, I think, is a powerful statement of the convening power of the United States and the importance that not only we but these other nations place on Ukraine’s defense needs going forward,” Kirby asserted.

There will be no NATO decisions resulting from the meeting about future U.S. force posture in Europe, Kirby said, because it is “not a NATO meeting.”

Austin does not have “a preset list of things” he wants participants to pledge, Kirby said.

“He wants to hear from allies and partners and … from the Ukrainians themselves about what … they’re doing and what they will need going forward. That’s why we’re calling it a ‘consultative group.’ So we can actually consult … but … we’re not going into this with a pre-cooked set of endings here.”

If specific decisions are not made, DOD hopes participants come up with “a framework for getting at specific decisions going forward,” Kirby said. He said that Austin will address the press at the conclusion of the meeting to explain “what we heard and what was learned.”

The meeting follows pleas from Ukrainian President Volodymyr Zelensky that the U.S. and other countries send heavier weapons and air defenses to aid in battling Russia. It also follows the White House pledging another $800 million in aid to Ukraine that includes artillery, artillery rounds, vehicles, and kamikaze drones that can destroy tanks. The U.S. has so far provided more than $3.3 billion in military aid to Ukraine.

Kirby said the congressional authorization amounts for lethal aid to Ukraine are drawing down but are not yet nearing exhaustion. He said the Pentagon will be discussing new amounts with Congress shortly.

Asked if the Pentagon believes the war will end soon, Kirby said, “I don’t think anybody can predict how long this is going to go on.”

Because Russia is now “concentrating their efforts in a smaller geographic area” of the Donbas where there has been fighting for eight years and where Russia has been “occupying [territory] illegally, … we would expect that the fighting could be prolonged.”

The conflict could go on for weeks or “potentially … longer than that,” Kirby said, but “nobody wants to see that. The truth is, and I’m sure you’re tired of me saying this, … if Mr. Putin pulled his forces out and stopped this illegal invasion, and sat down in good faith with Mr. Zelensky,” the conflict “could be over now.”

“Clearly he has no intention of doing that. I understand that, but it doesn’t mean it shouldn’t still be said,” Kirby added.

Kirby also reiterated that the Phoenix Ghost unmanned, tank-killing aircraft the Pentagon said it would provide to Ukraine “was already under development by the U.S. Air Force” and was not developed for this conflict.

The system’s capabilities “happened to be very appropriate to the kind of fighting that we anticipate is going to go on in the Donbas region,” Kirby said. However, “it wasn’t pulled forward for the fight” in Ukraine.

The U.S. will provide 121 of the units, but Kirby could not give details. The Ukrainian military will need some training on the system “because it’s not in their inventory,” but Kirby said that could happen quickly, “and we’re going to accelerate delivery.” The training will be similar to that provided for the Switchblade tank-killing UAV, he said.