Skip to content
Carl Levin, as chairman of the Senate Armed Services Committee, meets Soldiers from his state of Michigan at the Regional Command (South) headquarters during his visit to Kandahar Airfield, Afghanistan, Oct. 24, 2013. Levin died July 29, 2021, in Detroit at the age of 87. U.S. Army photo by Sgt. Antony S. Lee.
Expand Photo 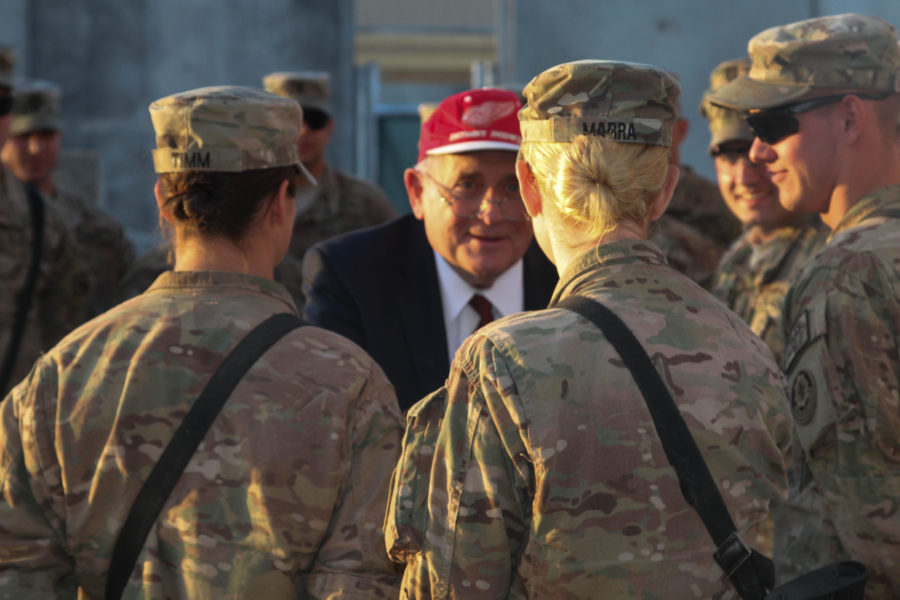 Levin began his career as an attorney, professor, and assistant attorney general in Michigan and was elected to the Senate in 1978. He became the state’s longest-serving senator before retiring in 2015.

“Whether he was chairing a hearing on critical national security issues or working on behalf of his home state, he
believed that collaboration and compromise served our common purpose better than partisanship and political
brinkmanship,” Levin’s family said in a statement. “He was a clarion voice for a military strong enough to defend our nation and uphold American values.”

Levin first took over the Senate Armed Services Committee in 2001, later telling a Roll Call reporter that he had never served in the military and saw guiding the military as “a way of providing service.”

Throughout his time in the Senate, Levin was known for pressing for strong oversight of military procurement programs, nuclear nonproliferation through steps such as the Nunn-Lugar Cooperative Threat Reduction Program and New START, and enacting the legislation that ended the “Don’t Ask, Don’t Tell” policy.

After the Sept. 11, 2001, attacks, Levin visited ground zero at the Pentagon and supported the authorization to target al-Qaida in Afghanistan, though he opposed the invasion of Iraq.

Levin announced his planned retirement in 2013, saying he wanted to use his last term to “best serve my state and nation” by focusing on “fiscal pressures on our military readiness” during sequestration. The 2015 National Defense Authorization Act was named the Carl Levin and Howard P. “Buck” McKeon National Defense Authorization Act in both his honor and for the retiring representative from California. The Arleigh Burke-class guided missile destroyer DDG-120 was named the USS Carl M. Levin in his honor in 2016.

In a statement, both the current chairman and ranking member of the Senate Armed Services Committee paid tribute to Levin. SASC Chairman Sen. Jack Reed (D-R.I.) said Levin was a friend who “tackled every challenge with character and integrity.”

“I was fortunate to travel with Carl many times to U.S. outposts and ships around the world, and I witnessed firsthand his concern for those who served,” Reed said. “He understood service and sacrifice, and his tireless advocacy for the troops has left a lasting legacy within our military.”

Ranking Member Sen. Jim Inhofe (R-Okla.) said Levin was a “rare Democrat who was totally independent and had no issue disagreeing with his party when he felt strongly. He was so strong on defense that I wondered why the Democrat leadership left him in that position—but he was so popular he would have been impossible to get rid of.”