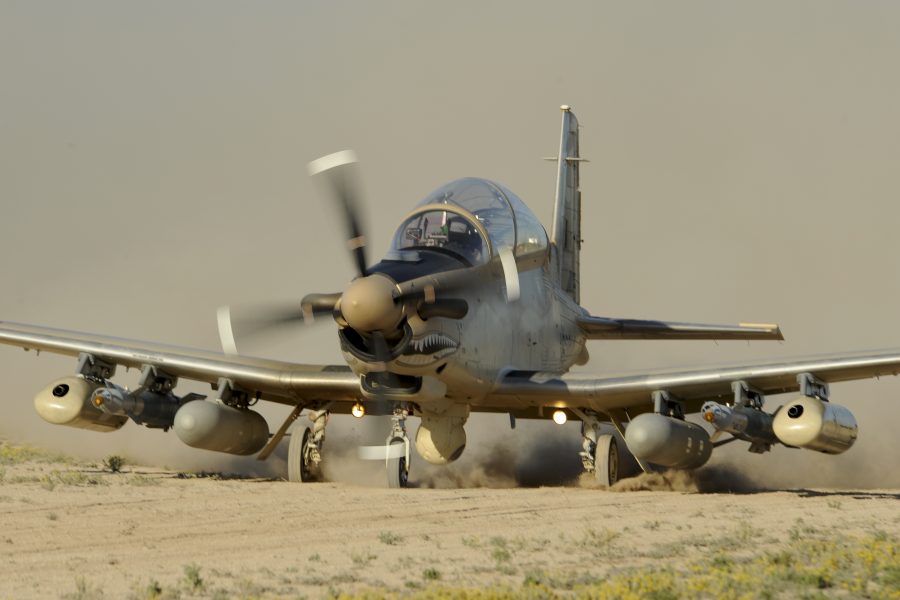 Multiple companies who faced off in the Air Force’s light attack experiment will again compete for a similar contract from U.S. Special Operations Command.

SOCOM Acquisition Executive James Smith told reporters May 13 the command is very pleased with industry’s response so far. He declined to say how many proposals SOCOM received.

“We’ve got a good competition going,” Smith said. “There are sufficient vendors out there that have a product that they can offer that we’ll be able to put into production in fairly short order.”

“Textron Aviation Defense is maintaining open lines of communication with USSOCOM regarding its plans, timelines, and milestones in support of its armed overwatch experimentation,” said Brett Pierson, Textron’s vice president of defense strategy and sales. “Our Beechcraft AT-6 Wolverine is purpose-built for the warfighter and ready to demonstrate its proven austere, deployable, and sustainable capabilities.”

The AT-6 is one of two light attack airframes the Air Force bought for further testing earlier this year. Sierra Nevada and Embraer Defense and Security are pitching the A-29, which also received a small light attack contract for Air Force Special Operations Command’s combat air advisory mission.

Air Tractor also confirmed to Air Force Magazine on May 12 it is participating in the armed overwatch program. FlightGlobal reported May 4 a Leidos-led team is offering the Bronco II.

Whereas the Air Force’s project focused on finding a platform that is cheaper and simpler to fly than a fighter jet for U.S. and partner counterterrorism operations, SOCOM wants a new plane for close air support; armed intelligence, surveillance, and reconnaissance; strike coordination and reconnaissance; and airborne forward air control. Those would be part of counterinsurgency work in both permissive and austere areas.

Light attack had a broader set of requirements than armed overwatch, Smith argued, whereas SOCOM is focusing on finding a plane that can perform close air support in hard-to-reach areas without a large sustainment footprint. He said a company’s ability to integrate new weapons and intelligence sensors into a basic aircraft is more important than the airframe itself, noting the Air Force was more interested in the actual platform.

Large remotely piloted aircraft are still on the table, Smith added, but may be more expensive to maintain than SOCOM wants. The Air Force also focused on manned aircraft before noting that foreign countries might be more interested in unmanned platforms.

“We are on the backs of the Air Force’s effort. We’re using the same program managers and engineers,” Smith said. “Everything that was learned by the Air Force in their light attack experiment is being leveraged into ours.”

Competitors have already submitted their first round of paperwork. Next, SOCOM will visit contractors for an up-close look at their offerings before deciding which aircraft should move on to the demo in phase three. The military plans to award up to $4 million each to as many as four companies for that experiment, followed by a possible production contract.

“At the speed that we’re moving on this acquisition, we don’t anticipate at the top of the demo that the vendors will have been able to complete weapons integration, communications integration, ISR integration,” Smith said. “They’ll bring to that demonstration their version of comms gear that will achieve the connectivity that we’re looking for, … both with the direct line of sight, beyond line of sight, etc.”

Aircraft will also be asked to simulate the weight of weapons to replicate what they might carry in real life, he added.

SOCOM ultimately wants to buy up to 75 aircraft over five to seven years. It requested $106 million in fiscal 2021 to move the program forward.

Editor’s note: This story has been updated to clarify details of the upcoming demonstration.