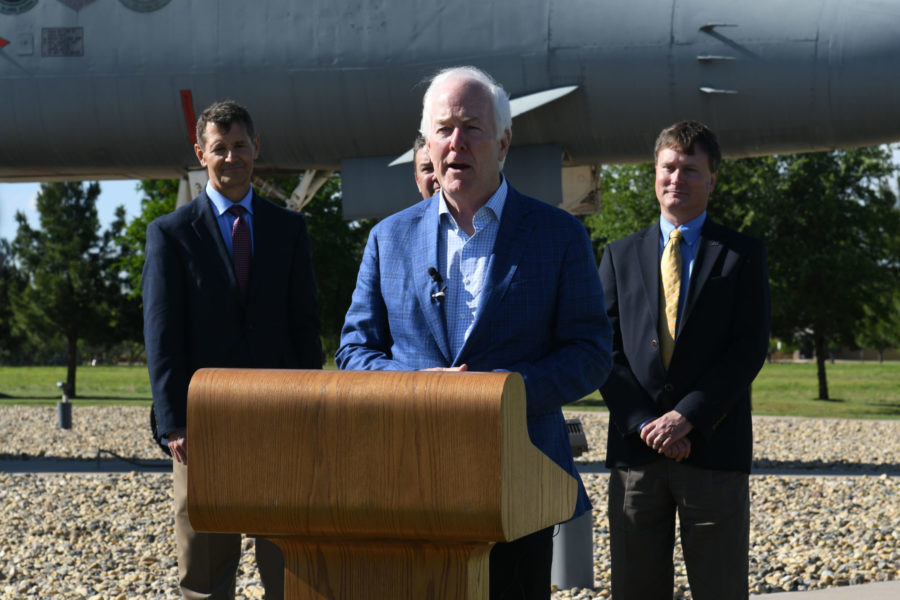 The fact that it will take years to replenish U.S. stocks of weapons supplied to Ukraine ought to be a “flashing red light” that the defense industrial base is not prepared for superpower competition, Sen. John Cornyn (R-Tex.) said on an American Enterprise Institute webcast Jan. 23.

Citing a Center for Strategic and International Studies report that it will take five years to fully replenish just the 155mm artillery ammunition supplied to Ukraine—at the rate of 93,000 rounds per year—and there will be similar delays in replacing other such materiel, Cornyn said it is clear “we’re not ready” for the demands of facing off against China in a new, multipolar military competition.

Cornyn is a member of the Senate Intelligence, Finance, and Judiciary committees.

“Clearly, our industrial base is not engaged” to produce at necessary levels, Cornyn said, adding he finds the situation shocking. “I think they’re waiting for demand signals, primarily prompted by appropriations by Congress and multiyear contracting.”

But Cornyn also said he’s not seeing an “‘all hands on deck’ commitment” from the Biden administration to remedying the situation.

The last two defense budgets approved by the Congress were tens of billions of dollars beyond what the administration requested, Cornyn said, indicating a “bipartisan interest” in getting defense stockpiles up to where they need to be to deter a peer adversary. “We need to be ready” to deal with aggression “in more than one part of the world,” he said. The level of weapons production is a “glaring problem,” he added.

However, there are no guarantees that bipartisan support for greater defense spending will continue, Cornyn warned.

“I think it’s going to be hard fought,” he said, citing the $30 trillion national debt and “a great deal of public concern” that this leaves the nation little flexibility to deal with another financial, health or military disaster.

“What it means is that if we have another pandemic, if we have another financial crisis like we had in 2008, interest rates are now high because of inflation. We have a lot less flexibility in dealing with those than we would if we had a more reasonable debt to GDP ratio. So … there’s going to be a lot of hard-fought debate about that. But I would say the days the days of spending all this money like we did in last two years” on various infrastructure and pandemic smoothing-out programs, “those days are over.”

Asked why this situation seems so intractable, Cornyn opined that “we try to repeatedly cash the ‘peace dividend’ when there is no peace.” He said the invasion of Ukraine by Russia was a clear sign that “our holiday from history is over.”

The U.S. is now in a “great power competition … and we haven’t risen to the challenge.” He said the situation requires “a sense of urgency” lacking in the Biden administration, and while he applauded the general direction set out by the National Security and National Defense Strategies, “right now I don’t see anything that gives me a great deal of comfort” that the nation is properly prepared for “a multifront … conflict.”

The amount of equipment and aid flowing to Ukraine has been adequate, Cornyn said, but while he would like to see even more, there are some in Congress who may grow tired of a long-term commitment to the war.

Historically, “the longer these things go on, the more the American people become … fatigued … by the endless expenditure of funds, and [they] say, ‘this has got to come to an end,’” he said.

The intelligence community is good but not “a mind-reader,” Cornyn said, and it’s impossible to know how long Russian President Vladimir Putin will keep us his aggression, even if he’s not succeeding.

However, that doesn’t mean the U.S. should give the Ukrainians an ultimatum to accept a truce, Cornyn said.

“I don’t believe it’s our job … to tell the Ukrainians, ‘you must take this deal … or else we’ll pull the plug on our support.‘ I do not think that’s appropriate,” the senator said.

As for China’s designs on Taiwan, Cornyn said the U.S. must learn from Ukraine that “one guy” can “wake up in the morning” and decide to invade another country, potentially without warning.

To deter China, Cornyn said Taiwan must be strengthened, “and we’re doing that.” But he said he does not believe Taiwan is yet strong enough to thoroughly discourage China, and the U.S. must also show it is willing to match China.

And while it is true that the U.S. has more allies than China, no one should assume that all of America’s allies in the Pacific would “come running” if Taiwan is invaded, Cornyn added; on recent trips to the Pacific, Cornyn said he detected little enthusiasm for coming to Taiwan’s rescue from Australia or New Zealand, and Indian Prime Minister Narendra Modi’s government has proven “a disappointment” because of its unwillingness even to condemn Russia’s invasion of Ukraine.

For its part, “Japan clearly believes that an attack on Taiwan would threaten their national security interests, particularly given the … disputed islands in in the South China Sea,” Cornyn said. “But again, I’m a little less confident about what some of our other friends might do. And so I don’t think we should assume that the cavalry” would ride to the rescue, “but I do think that our national security interest” and economic interests would suffer greatly if China invaded Taiwan and “we let them succeed.”