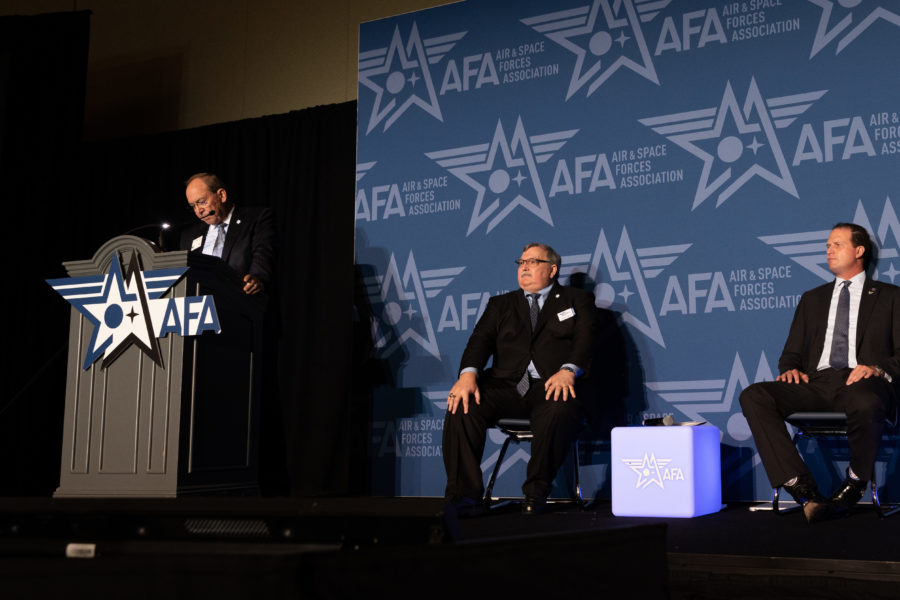 Congress needs to do a better job of providing the Air Force with steady, consistent funding; the Air Force needs to find ways to develop programs faster; and the two need to work together to ensure that the service can build capacity for both the present and the future, a pair of Airman-lawmakers said Sept. 20.

Rep. Kaialiʻi Kahele (D-Hawaii) and Rep. August Pfluger (R-Texas) offered bipartisan support for the Air Force and the importance of airpower at AFA’s Air, Space & Cyber Conference. Kahele is a member of the Air National Guard and has flown C-17s, while Pfluger is in the Air Force Reserve and has flown F-22s.

“The story needs to be told in a way that mentions that insatiable appetite, that demand for air power,” Pfluger said of the Air Force’s public perception. “When anything pops up around the world, what is the first phone call that’s made? It’s to air power. It’s to space power—it’s to the Department of Air Force. The political capital needed to send an airplane is not nearly as high as [what] would be required for boots on the ground or any sort of other method or other department or other domain.”

What Congress Can Do

Promoting air power in Congress could be especially critical, Kahele and Pfluger agreed, because of the threats posed by China and Russia and the possibility that the Pentagon will need to prepare to deter and fight on two fronts while staying within a budget.

“We may not need every service to have a two-front-war capacity, capability. That is the narrative that I think we need to coalesce around on the Hill,” Pfluger said. “That is what we can do something about with a limited-resource environment.”

The issue of the resources is particularly crucial for the Air Force given the need to modernize and build up capacity after decades of getting smaller and older, a fact highlighted by retired Col. Mark Gunzinger of the Mitchell Institute for Aerospace Studies, who called the issue a “budget-driven spiral toward a hollow force.”

Part of the issue, all three agreed, is the practice of “pass-through” funding, whereby funds are routed through the Air Force to classified programs out of its control—making the service’s budget look larger than it is, especially compared to that of the Army and Navy.

Eliminating the pass through “is so important,” Kahele said. Removing it from the budget will create “transparency for the decision-makers on the Hill and for the American public.” In addition, it will help to restore parity in budgets. That will allow “the United States Air Force to be able to compete against the other branches. Historically, it has been one-third, one-third, one-third. But if you look at the Air Force’s budget as presented by the administration, it’s about $230 billion. That is not reflective of what the Air Force has money to spend on.”

All told, pass-through funding accounted for roughly $40 billion in the Air Force’s 2023 budget request. It’s an issue lawmakers have tried to address before, and Pfluger urged Airmen and Air Force supporters to contact members of Congress to push them to keep pressing the issue.

But even if pass-through funding changed, there would still be the problem that almost annually now, Congress fails to pass a budget by the start of the fiscal year, instead relying on continuing resolutions that keep the government open but funded at the previous year’s level.

Air Force leaders have frequently decried CRs, and said they prevents the service from starting new programs or doling out contracts in a regular, predictable manner, and Pfluger pledged that “we are committed to making sure that we can avoid those CRs … to allow policymakers inside the Department of Defense and Air Force to do what’s needed to deter.”

But Congress appears all but certain to need a continuing resolution to start fiscal 2023 on Oct. 1, and Kahele warned that a full budget and the annual National Defense Authorization Act, which sets policy for the Pentagon, may not pass until December, after the midterm elections in November.

What the Air Force Can Do

While Congress struggles with the budget, the Air Force could stand to change as well, both congressmen agreed, especially when it comes to breaking through the Pentagon’s notorious bureaucracy.

“Our request, from the other side of the river, is that the Department of Defense, Department of the Air Force move at the speed of relevancy to face these threats,” Pfluger said. “No longer can we afford to have 15-, 20-year programs like when I was part of the F-22. We have to move at the speed of relevancy when it comes to acquiring new weapons systems and getting them into an operational level of service.”

At the moment, Pfluger said, the Pentagon and the Air Force don’t account for political risk when formulating acquisition schedules. That can backfire when programs are delayed or face issues, Kahele added.

“In the conversations I’ve had on [the House Armed Services Committee] and seeing different members debate, I know that they get upset when we are not able to get the platforms on time, on schedule, what we ordered,” Kahele said. “And we can talk about F-35. We can talk about the KC-46. But it’s going to take a whole-of-government effort with the defense industry to be able to produce the platforms that we’ve ordered, and produce them on time and on schedule.”

While both Congress and the Air Force can make improvements, it will all but certainly take time to get there. And in the meantime, there’s still the pressing issue of the service needing to confront current challenges and threats.

It’s an issue that requires both the executive and legislative branches of government to work together, Pfluger said, especially given the threats and risks involved.

“I think we do have a real problem with risk right now. Specifically when it comes to our fifth-generation fighters, when it comes to the transition between the B-2 and the B-21, are we going to be able to actually execute what the NDS states that we need to be ready to execute?” Pfluger said. “And this is a real decision that we’re going to have to make on both sides. … And we need to come together in both branches of government and have that clear-eyed discussion.”