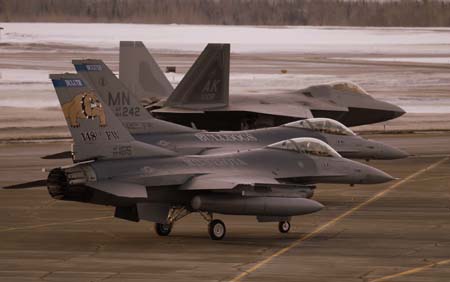 ce general who oversees Operation Noble Eagle says he is “very comfortable” with the prospect of new F-22 and F-35 fighters taking over the nation’s air sovereignty mission in the “10- to 15-year point.” However, Gen. Gene Renuart told the Senate Armed Services Committee that he is concerned about five to 10 years out, the time period when the Air National Guard F-16s that bear the brunt of Noble Eagle will age out and the production of replacements, namely the F-35, will still be ongoing. (The Government Accountability Office recently reported that a number of alert sites around the country would have to suspend operations beginning in 2010 before they can transition to new aircraft.) Renuart believes that both the F-22 Raptor and F-35 Lightning II Joint Strike Fighter “fit very well into the capabilities [needed] in the next 10 to 15 to 20 years,” but, he acknowledged, “The F-16 will begin to go out of service here shortly.” Renuart told the lawmakers that Air Force officials are “working very aggressively to look at bridge capacities,” but they “haven’t determined the final answer yet.” Still, Renuart added, “So far, I’m very comfortable with their approach.” (Renuart written testimony)