Skip to content
General Atomic's Avenger aircraft, and Kratos' XQ-58A Valkyrie demonstrator. Neither aircraft is necessarily what the OBSS will eventually look like but are examples of unmanned aircraft developed by the two contractors. Photos from General Atomics, Air Force
Expand Photo 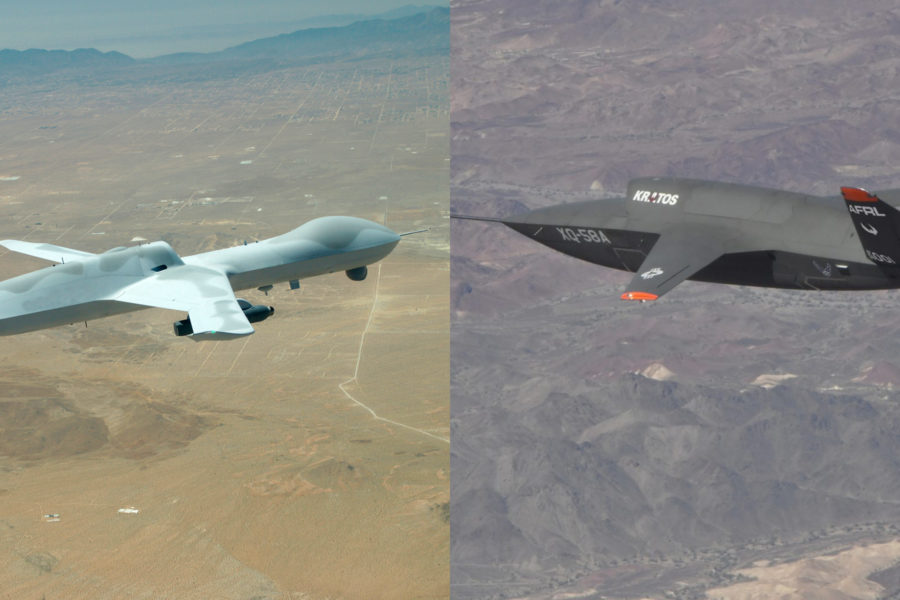 The cost-plus-fixed-fee contracts are potentially worth $49 million if a $31.4 million option is exercised. They call for the two companies to deliver a “base effort” within a year, while the “option technical effort” would be completed by the end of January 2024. The work supports AFRL’s Autonomous Collaborative Platforms program and is a technology maturation effort. Seven companies competed for the contract, but only one will be carried into fabrication.

The Broad Agency Announcement dates back to September 2020 under what AFRL called “Science and Technology for Autonomous Teammates,” or STAT, and proposals were submitted in April of this year. The Air Force expected to award two basic effort contracts but planned to exercise only one option; the BAA said AFRL “cannot afford” to exercise two options. The BAA said the service was looking for an open-architecture system “to achieve the goals of rapid time-to-market and low acquisition cost.” The OBSS is “the second aircraft demonstration in a product line concept for attritable aircraft development, treating the aircraft as a limited-life commodity,” USAF said.

Kratos, in a press release, said the OBSS is “intended to be an affordable, highly modular conventional takeoff and landing, jet-powered” unmanned aerial system. It aims to “provide significant performance for sensor extension missions” for manned aircraft, but also potentially offer a “significant offensive weapons volume” or “weapons bay extension.”

The concept is part of AFRL’s ongoing manned-unmanned teaming prototyping efforts and presumably explores using escort aircraft to augment the capacity and capability of manned fighters.

Kratos is heavily involved in the arena of low-cost attritable aircraft systems, and AFRL has already tested the XQ-58 Valkyrie and UTAP22 Mako in the arena of manned-unmanned teaming. General Atomics has an extensive line of UASs, including the Predator, Reaper, Gray Eagle, and Avenger lines serving the Air Force and Army.

Kratos said the OBSS—of which it declined to supply an image—is “a new addition” to the company’s UAS line, meant to employ kinetic and non-kinetic effects that “generate affordable, force-multiplier combat power.” It will use digital engineering methods to “develop, leverage, and integrate system-ready technologies” and perform “prudent early ground and flight demonstrations and experiments.”

Steve Fendley, Kratos Unmanned Systems Division president, said the contract shows Kratos is getting larger, “further enabling our economies of scale” across its UAS portfolio. The company seeks to help USAF supply “mass to the fight” by “bending the cost curve to enable the U.S. to acquire and employ large numbers of aircraft” that challenge an adversary and “force them to recalculate their options.”

Eric M. DeMarco, Kratos Defense and Security Solutions CEO, said the company is “committed to disrupting the …national security market by providing rapid, agile, affordable, and relevant systems.” The OBSS award “reaffirms our approach to treat affordability as a technology.” He credited the company’s Ghost Works unit as designing its OBSS.

General Atomics could not immediately be reached for comment.