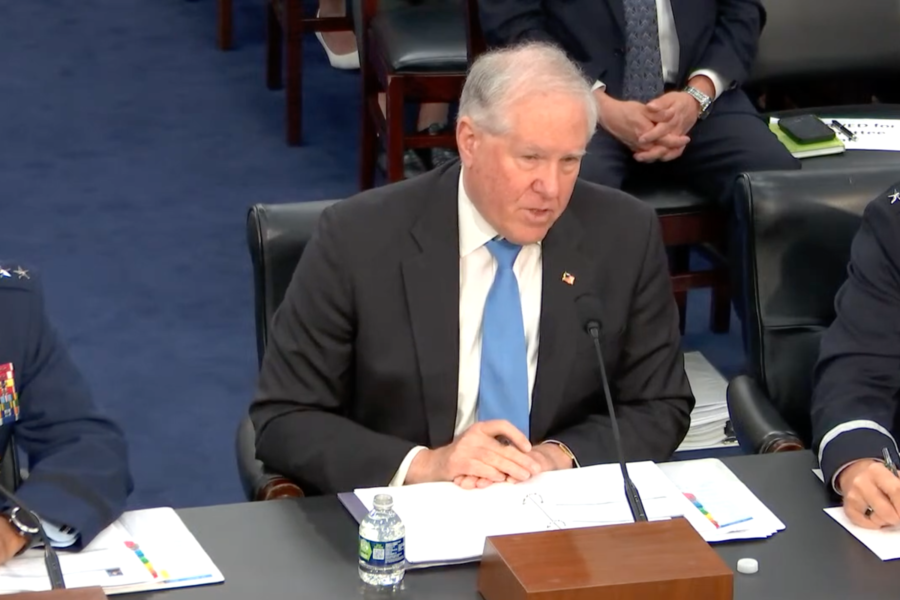 The Space Force’s budget got a big bump in the Pentagon’s 2023 budget request, with a topline of $24.5 billion—36 percent more than fiscal 2022’s enacted level.

And even more money in the years ahead is likely, according to Air Force Secretary Frank Kendall.

“I do not anticipate the future budgets will remain flat or go down for the Space Force—quite the opposite,” Kendall told the House Appropriations defense subcommittee May 13.

If Kendall’s prediction is accurate, it would contradict the numbers laid out in the Pentagon’s Future Years Defense Plan, which projects spending five years in advance. Rep. Betty McCollum (D-Minn.), chair of the panel, noted in questioning Kendall that the overall FYDP for the Space Force is “basically flat, rising a bit in 2024 before falling below the 2023 proposed budget level.”

While McCollum expressed concern that the FYDP projections don’t “reflect what it will actually take to deliver successful acquisitions and programs,” Kendall indicated that the numbers are subject to change as the Space Force matures and leaders get a better sense of what they need.

“We still have to define our requirements. We have to make sure that the programs we put in place … are structured for success so that we don’t have massive schedule and cost overruns. We all want to avoid that,” Kendall said. “There are opportunities through emerging technologies and commercial best practices that I think will make that possible. But we’re going to still have to be disciplined, and we’re going to have to be smart about how we invest in space. I think that’s the picture that we see coming. At this point, I think the [2023] budget is a good start toward those types of architectures and gives us the resources we need to decide what next steps we need to take.”

The FYDP is primarily a “planning tool,” according to the Congressional Research Service, that “allows DOD and the military services to plan for anticipated changes to programs or priorities.” But it can be changed, and former Pentagon and Air Force comptroller Robert F. Hale, in a report on the DOD budgeting process for Brookings, found that FYDPs “do not always capture changes beyond the budget year, especially increases associated with newer and more sophisticated weapons.”

The Space Force, meanwhile, is in the process of absorbing the Space Development Agency, a move that accounts for a sizable chunk of the increase in the 2023 budget. There are also one-time costs associated with interservice transfers expected to come onboard in the next year or so.

Even still, the service and SDA are dedicated to building out a constellation of hundreds of satellites in low-Earth orbit, called the National Defense Space Architecture, ​for missile warning, communications, data coverage and sharing, and other capabilities. While these spacecraft will be smaller and less expensive than previous military satellites, there will be far more to create a distributed, resilient architecture.

The SDA is also planning to follow a two-year cycle in rolling out new capabilities, a rapid pace that will require steady funding as well.

But while the Space Force’s budget is likely to change from the FYDP, one aspect of the future plan that likely won’t, Kendall told lawmakers, is the Air Force’s reduced buy of F-35s in 2024.

The Air Force surprised some when it cut its requested purchase of F-35s in 2023 from 48 planes in previous years all the way down to 33. In 2024, though, the FYDP shows that request going even lower, to 29, before rising again.

As he has done before, Kendall insisted that these reductions don’t mean the Air Force is backing away from the F-35, predicting that the service will be buying the fifth-generation fighter for 15 years to come.

But he also indicated that the FYDP is unlikely to change.

“The reduction we took this year, and we will probably extend that to next year, was based on a number of factors,” Kendall said. “There were a number of things we need to do in the TacAir portfolio. One of them was to buy out the remaining number of inventory of F-15EXs that we need, for the capabilities that the F-15EX will provide. We want to increase the funding for the Next Generation Air Dominance [platform] which will be the follow on to the F-22. We’ve got some other programs we need to move forward as well.

“We also are very interested—we’re insistent on getting the Block 4 capabilities for F-35, and the contractor has been late in delivering them so far. So we want to see evidence that they will be able to accomplish that before we increase the production, so that was a major factor as well.”

The Block 4 update to the F-35, which would include the latest hardware and software modernizations, needs the Technical Refresh 3 upgrade to “unlock” its updates. However, that has taken Lockheed Martin longer than expected to develop.

Early on in his tenure, Kendall noted that he had dealt with issues in the Joint Strike Fighter program before, when he was undersecretary of defense for acquisition, technology, and logistics. His solution then was to cap purchases for several years to put pressure on Lockheed Martin and to avoid buying jets that would later need to be modernized.