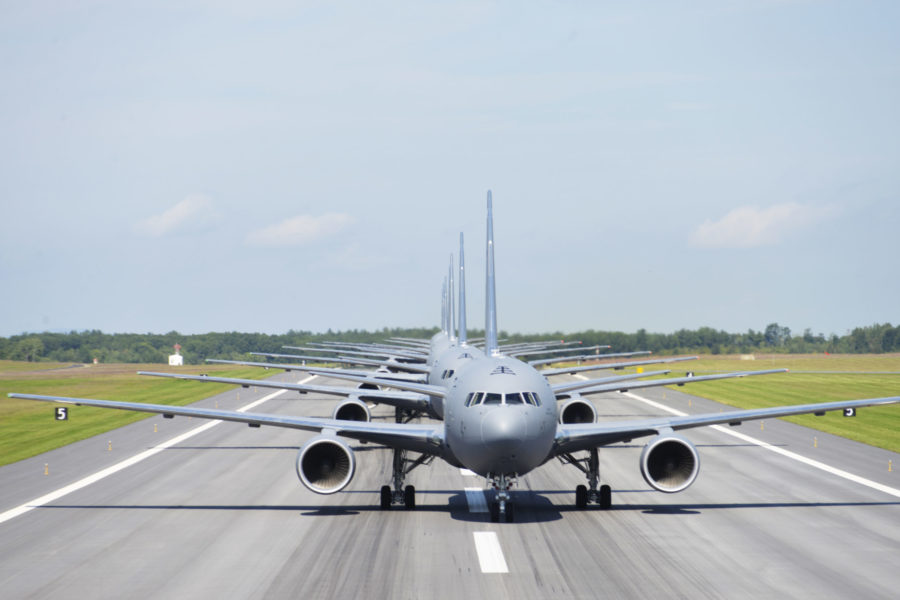 Kendall: KC-46 Might Have Worked Better If Not Fixed-Price; Pegasus Now Cleared for 97% of US Aircraft

Air Force Secretary Frank Kendall thinks the KC-46 program may have worked better if it had not been under a firm-fixed-price development contract, and he took responsibility for that, saying that when he was previously at the Pentagon, the acquisition system didn’t fully appreciate how complex the job was.

“I’ll take the hit for that,” Kendall said in a streaming interview with the Heritage Foundation June 1.

In a related development, the Air Force says it has now certified the KC-46 to refuel 97 percent of the aircraft the Pentagon needs it to.

The KC-46 “was supposed to be a low-risk program,” but the Pentagon’s acquisition enterprise “didn’t look closely enough at the design,” which was “more risky … than people realized, at the time,” Kendall allowed.

Kendall was principle undersecretary of defense for acquisition, technology, and logistics when Boeing’s entry won the KC-X competition in 2011.

Boeing was in a hot competition for the KC-X with Airbus “and they want[ed] to win. So, they’re going to tell you the best story they can,” Kendall said, suggesting that Boeing made out that the Remote Vision System (RVS)—and the KC-46 generally—was less technically challenging than it really was.

Boeing at the time promoted the aircraft as a straightforward and relatively modest modification of its 767 freighter, enhanced with a modern glass cockpit and the RVS, which was to have expanded the vision and capabilities of the boom operator versus the KC-135 and KC-10.

“I always held KC-46 up as the archetypical fixed-price development program,” Kendall, said, noting that it “met all five” of his criteria at the time for a program that could safely be conducted under a fixed-price contract, but “we still got into deep, big trouble.”

He added that “we might not have, if it had been a cost-plus program, and the government supervised the contractor more aggressively.” However, in a fixed-price arrangement, “you’ve got to let the contractor kind of do what it wants, because he’s taking the risk on the cost.”

Kendall’s remarks suggest he will be more skeptical of contractor claims and lowball bids, even when the system being negotiated is relatively straightforward and well understood.

In April, Boeing CEO David Calhoun said the company would re-think its strategy of lowballing big government contracts, after losing $5.4 billion on the KC-46 alone and recently another $1 billion on the T-7A trainer and VC-25B Air Force One replacement. The Air Force has not had to pay any of those overruns, but it has suffered significant delay on the KC-46, which is still not considered truly operational despite many aircraft having been fielded for several years.

Kendall’s five requirements for entering into a fixed-price contract, which he set out in 2012, said the program must have :

Gen. Mike Minihan, head of Air Mobility Command, announced June 2 that the KC-46 has been granted a seventh interim capability release (ICR), clearing more aircraft to be refueled from the new tanker, which can now refuel 97 percent of the airplanes that AMC is required to pass fuel on a daily basis.

Minihan, in an AMC press release, noted that, a year ago, the KC-46 was “not cleared to operationally support any U.S. TRANSCOM [Transportation Command] missions.” However, after review by “professionals across the enterprise analyzing data and making risk-informed decisions, we’ve deliberately and aggressively accelerated the Pegasus’ operational use.”

He added, “Credible and reliable KC-46A tanker capability is now available to our joint and international partners. Let’s go.”

The KC-46 made a seven-week deployment to Spain for evaluation in an operational environment, coinciding with the need to demonstrate AMC refueling readiness during Russia’s invasion of Ukraine. Minihan said the aircraft performed well during that deployment. The next steps in development will be to analyze those lessons learned and accelerate certification with foreign and allied aircraft that are meant to refuel from the KC-46, Minihan said.

While AMC was not immediately able to identify those aircraft still outstanding for certification with the KC-46A, the B-2 bomber is not yet on the list of cleared aircraft. Part of the KC-46’s deficiencies include a boom stiffness that has the potential to scratch the stealthy surfaces of the B-2 and other stealth aircraft. However, the F-22 and F-35 are both cleared for the Pegasus.