Skip to content
The AGM-183A Air-launched Rapid Response Weapon (ARRW) in this illustration shows the hypersonic missile after launching from a B-52 bomber. ARRW is encapsulated in a rocket that accelerates the weapon to hypersonic speed. Lockheed Martin illustration
Expand Photo 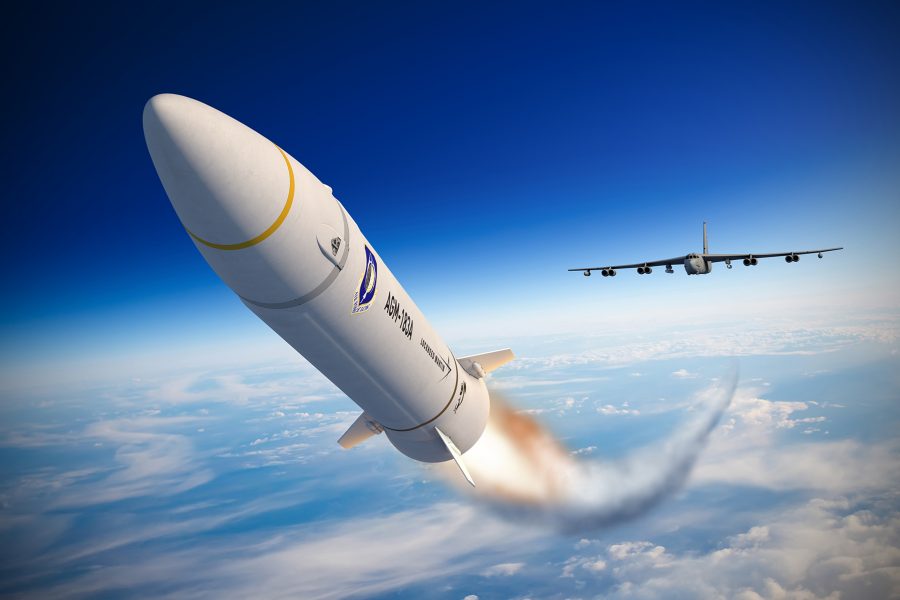 Air Force Secretary Frank Kendall warned of putting too much emphasis on hypersonics just because China is advancing in that area, saying hypersonic missiles are better suited to China’s strategy and that USAF has yet to determine the right munitions mix for the future. He also warned that the Advanced Battle Management System won’t be a “big bang” single acquisition program but instead a series of incremental steps that will network the Air Force and the other services.

The targets that China is “worried about, that we present” are well addressed with hypersonic weapons, Kendall said during a Jan. 19 virtual Center for a New American Security event. These tend to be major air bases in the Pacific and naval formations. But “I think we have to be careful about not mirror-imaging the potential threats,” he said.

There was a “rush” during the Trump administration to develop hypersonics, Kendall noted, but they may not always be the most “cost-effective … tool” for the Air Force.

“We don’t have the same targets that [China is] worried about,” he said. “We have to think about what’s most cost-effective for us … [Hypersonic systems are] very expensive compared to conventional weapons. So we’ve got to look at that very carefully and decide where we need to be in that tradeoff. I don’t think enough work has been done on that.”

Kendall didn’t elaborate on the targets most compelling for USAF or whether they are best addressed by slower, stealthy cruise missiles, air-breathing hypersonic cruise missiles that would be cheaper than the boost-glide variety, or direct-attack weapons.

Broadly, he said, the U.S. goal is “having a deterrence that defeats aggression, … whether it’s in Ukraine or … Taiwan, for example.” The “core mission” of adversaries such as China, however, is “to keep us out of their part of the world, or to keep us from intervening,” he said. These are “very different operational requirements.”

The right weapons mix is “still very much an open question for me,” Kendall said. He acknowledged that hypersonic missiles have the advantage of being fast and unpredictable and “can be a valuable asset” but that the Air Force needs to better plot its path for future munitions.

“There is a role for hypersonics in that mix,” he allowed. “And I think we should continue to proceed with developing and fielding appropriate hypersonic” systems.

On ABMS and the joint all-domain command and control requirement, Kendall said there is no “grand solution,” noting there will be bridging solutions to the eventual system. For example, there will likely continue to be some air component of an airborne and ground moving target indicator capability like AWACS and JSTARS, even though both of those systems have become more vulnerable. The goal will be a space-based system, but it’s not yet at hand, Kendall said.

“Right now we’re proceeding with Capability Release 1, as planned,” Kendall said, which is to put a communications node on KC-46 tankers. As the system progresses, his goal will be to “focus on the places where we get the highest return” on investment in the shortest period of time.

Getting to a combined AMTI/GMTI capability will involve interim steps such as “airborne components”—manned and unmanned aircraft—toward “an overarching solution” that will have space components. Because “high-level nodes can be attacked or be potentially vulnerable, … my intuition is that we have nodes at lower levels,” Kendall said. “We need to maintain continuity through [electromagnetic pulse]-threatened environment, [or] where we’re in a contested environment.”

Developing the overall architecture for ABMS has required a “fair amount of work” over the past few years, but it’s been directed toward “the premise that we could get to a grand solution. And I don’t think that’s going to be affordable or easily achievable on a timescale that’s realistic to meet our needs.” Capability Releases 1 and 2 “can be a part of all that, but there’s not yet, in my mind, a solution to that question.” Capability 2 will involve the AMTI/GMTI and various new intelligence, surveillance, and reconnaissance capabilities.

Future combat operations will be more like D-Day than the 8th Air Force’s bombing campaign in Europe, Kendall analogized. It will be necessary to shift a lot of decision-making to lower levels because of the likelihood of disruption of communications, he said.

“They’re very compressed in time. They’re very high density, and a lot of decisions have to be made in the timescale which is imposed by the operation. And it’s almost impossible to imagine that being done at a very, very high level and managing the amount of data. It’s also hard to imagine it being done without a lot of automation.” Artificial intelligence tools will be necessary to aid in decision-making, he said.

Given that high-level management of a major operation “can’t be done—you’ve got to go down to lower levels,” the question becomes “what is that level? And how do you do that?” The U.S. has not had to conduct operations in a contested environment for a long time, he said, and new thinking must be applied to cope with cyberattacks and electronic warfare in a way in which the U.S. hasn’t had to operate for decades.

Kendall repeated that the Next Generation Air Dominance (NGAD) system is an “imperative” and that his top priority, in the near term, is getting a “space order of battle architecture … right.” He reiterated that he’s launching new-start programs in unmanned aircraft to escort both fighters and long-range strike aircraft, with notionally five unmanned aircraft controlled by a manned one. They will “operate as a team.” The pilot will “call the play,” and the unmanned aircraft will execute with a high degree of autonomy, he said. But “we’re not going to be able to afford this” unless the unmanned aircraft are “cheaper platforms” that are “attritable, if not expendable.” Enough work has been done—on the development of the Skyborg autonomous piloting system, for example, and other technologies—that “it’s not a crazy idea. It’s something we can achieve,” Kendall said.

The question is, “how much, at what scale, and to what extent. We’re going to have to work on that,” but Kendall said his goal is to bring it to “a real operational capability.” These new aircraft will be run in special access programs, but “we’re going to figure out how to do this as quickly as possible” and with the help of companies.

Right Concept for the Future

Kendall said the Air Force’s agile combat employment model of rapidly moving forces around to many different bases is the right concept for the future. But bringing it to fruition requires a number of steps that Kendall pledged he will not allow to be sacrificed for programmatic priorities.

“We need … a sense of urgency” about bringing ACE about, he said. That will mean air bases “have to be harder,” with hardened shelters and facilities. Additionally, “We have to create some ambiguity for the enemy. We have to use multiple locations and deception to do that. We also have to have some level of defenses so that [the enemy] has some uncertainty about how successful his attack might be.” The Air Force also has to “change the equation” about “how much leverage [an enemy could obtain by] … shutting down … a small number of air bases. That, to me, is probably the most immediate task on the list, and one of the easiest ones … when you think about what you have to do.”

All these initiatives will require resources, which the Air Force hopes to find by retiring irrelevant systems, Kendall said. He expressed gratitude to Congress for allowing some of the divestitures USAF sought in the fiscal 2022 budget—though “not the A-10”—but insisted that Congress not hold on to obsolete capabilities just to preserve constituent jobs.

“Change can be painful, but it is necessary,” he said.