Skip to content
Then-Undersecretary of Defense for Acquisition, Technology and Logistics Frank Kendall speaks with a maintainer in front of an F-35. Air Force photo by 1st Lt. Hope R. Cronin.
Expand Photo 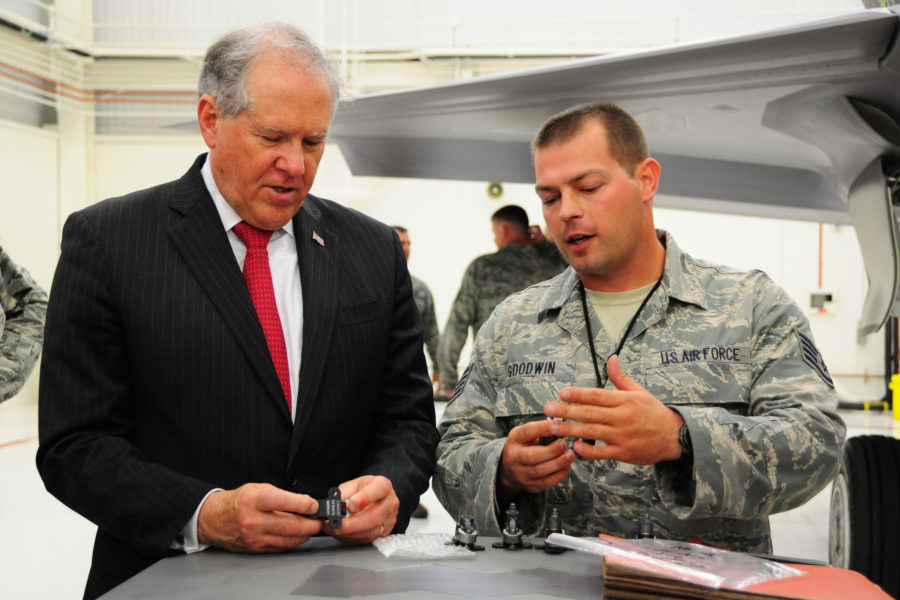 The F-35 Joint Strike Fighter and new Air Force Secretary Frank Kendall have a history, and some parts of it look to be repeating themselves.

Kendall, now in his third week leading the Department of the Air Force, oversaw DOD weapons buying as the undersecretary of defense for acquisition, technology, and logistics from 2012 to 2016. For the two years before that, he served as principal deputy undersecretary and acting undersecretary in the same office.

In those earlier years, the F-35 was not developing to plan. Serious design problems required expensive retrofits.

The issues came to a head in contractual discussions over Lot 4 of the low-rate initial production phase of the aircraft. Agreements in place since 2010, with the expected retrofits, were not what the Defense Department needed.

“We’re in a situation that bears some resemblance to one that I had earlier on, around Lot 4 or so, when there were a lot of design issues on a plane that hadn’t been resolved, and we were in the process of buying airplanes that were going to need extensive modifications,” Kendall told Air Force Magazine in an exclusive interview. “At that point, I seriously considered stopping production for two or three years to get those design issues resolved. …

“I decided not to do that.”

He instead decided to cap the production rate at 30 for two years “in part” to put pressure on the builder, Lockheed Martin, “but also to avoid buying airplanes that we were going to do expensive modifications on after we bought them.

Now, Kendall said, the Pentagon seems to be in a similar situation: The Air Force should be buying the F-35 that it needs—specifically the Block 4 upgrade with Technology Refresh 3, “which is having problems,” Kendall said.

TR3 includes a new core processor, a radar upgrade, and a new cockpit display, along with software updates to enhance electronic warfare capabilities. This refresh would “unlock” the jet’s Block 4 improvements. Because the Block 4 version is what the Air Force wants, negotiations have focused on fewer aircraft over the upcoming production lots. The F-35 Joint Program Office has said the TR3 upgrade will come in Lot 15, set for 2023, “as required.”

Skeptics question the timeline for Block 4 upgrades. The Government Accountability Office, in a March report, said the JPO’s schedule for the modernization effort was “not realistic,” with the Pentagon regularly underestimating how much work is needed to develop the upgrades.

“I think that we need to look, at this point, [at] what the appropriate production rate is to get us from where we are to when we have that capability on hand,” Kendall said. “And the contractor has not been performing very well—there have been a lot of problems with that.”

Like the Lot 4 negotiations, Kendall said he hopes slowing the buy will apply some pressure and get the upgrades as needed.

“It’s critically important to the success of that program and the capability of that platform that we get the Technology Refresh 3 fielded into it, get the Block 4 upgrade fielded,” Kendall said. His acquisition philosophy: to get “meaningful military capability in the hands of operators. That’s what it’s all about. And we need to get to Block 4.”

The Air Force faces extremely high operating and sustainment costs for the F-35, another issue that could affect the long-term health of the fleet. While Kendall, just in his third week, said he had not had a chance to look “into it in detail,” he did recently discuss the issue with the Joint Program Office.

“They do feel that they have some ways to reduce costs significantly that they’re still exploring. So, that’s encouraging.”

The F-35 still is a “dramatically improved capability” over fourth-generation aircraft, Kendall said. The jet represents a “game-changing tactical air warfare capability. And it is expensive, compared to much earlier systems, which are much simpler and less capable.”

As the fleet expands, the Air Force and other stakeholders need to drive the costs down, he said. Some “real opportunities” include replacing the much-maligned Autonomic Logistics Information System with the Operational Data Integrated Network.

“We can hopefully reduce some manpower through that. We can reduce the cycle times for maintenance and get some savings there as well,” Kendall said.

He added: “There are also some technologies that could go into future upgrades that could reduce some of the operational costs, such as fuel, significantly, but we’re not ready to commit to those at this point.” He nodded when asked if he was referring to a “next-generation engine.”