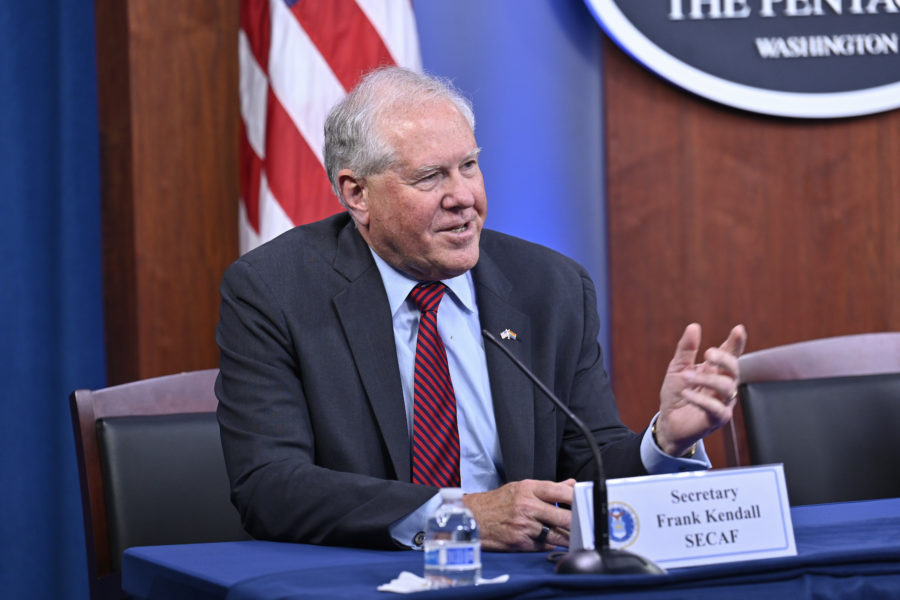 Kendall, Brown Address the Question of Nuclear Weapons in Ukraine

Editor’s note: This story was updated at 11:29 a.m. Eastern time to clarify Brown’s remarks. Brown did not acknowledge currently training Ukrainian pilots on U.S. fighters. Rather, he acknowledged continued conversations about potential future support to the Ukrainian Air Force, to include training “in various capabilities and capacities.“

ASPEN, Colo.—The question has darkened the counsels of the Joint Chiefs of Staff in recent months to a degree arguably not seen since the Cuban Missile Crisis: If Russian President Vladimir Putin uses a tactical nuclear weapon to gain the upper hand in its already historically bloody slog of an invasion of Ukraine, how should the U.S. military respond?

For the audience of senior U.S. officials and national security experts at the Aspen Security Forum, it was a question that Air Force Chief of Staff Gen. Charles Q. Brown Jr. had seemingly spent considerable time pondering.

“That’s really a hypothetical question, and I can’t tell you how we should respond because it’s up to the President to decide,” said Brown, a featured speaker at the forum that began July 19. “As a member of the Joint Chiefs and Chief of the Air Force, which controls two legs of the strategic nuclear triad—ICBMs and bombers—my role is to discuss possible options and the risk associated with each if the President should request them.

“First we need to understand the message we want to send, keeping in mind that it’s all about deterrence. The goal is not to get into a broader conflict than exists today. We also need to pay a lot of attention to risk—so that options don’t lead you down a slippery slope of escalation.”

Secretary of the Air Force Frank Kendall has also been thinking about the use of nuclear weapons in ways that he finds reminiscent of his decades as a Cold War warrior in government and private national security jobs.

“For a long time, Russia has had a doctrine of increased reliance on tactical nuclear weapons, so as we watch the Ukraine war evolve, everyone is very conscious of the fact that they have that capability,” Kendall said, also speaking at the Aspen forum. “I haven’t seen any evidence that they actually plan to use nuclear weapons, and it would definitely be a mistake … I’ve always thought that nuclear weapons are just inherently so destructive and dangerous. The only time they’ve ever been used was by the United States, and we used them for the purpose of bringing an end to an incredibly devastating conflict.”

Wars change the course of history, and the first state-on-state aggression and cross-border invasion in Europe since World War II has focused the attention of military and national security experts worldwide. As the discussions at the Aspen forum made clear, U.S. military experts are already using the Ukraine war to go to school on Russian military capabilities, even as they contemplate what lessons potential adversaries such as China are drawing from the conflict.

“Everyone is learning from current events in Ukraine. Russia is learning something, as is Ukraine. The United States and China are also learning, along with the rest of the global community. We’re only four-plus months into the war, and it’s by no means over, so there are more chapters to be written,” said Brown, who noted how quickly the Western alliance unified behind the most punishing economic sanctions on a large country in history as an early lesson. That has profound implications that are being studied closely not only by the United States and its NATO allies, but also by potential adversaries such as China. “From a military perspective, we’re also paying close attention to how Russian forces initially proceeded and how the Ukrainians reacted. And while it’s not a new lesson, we’re seeing clearly the value of air superiority and the reality that it’s not guaranteed.”

Indeed, the Russian military’s failure to quickly gain air superiority over the Ukrainian battle space despite a seemingly overwhelming advantage in aircraft numbers remains one of the enduring mysteries of the war. Part of the answer may be in the thousands of Stinger and other man-portable air defense missile systems that Western nations flooded into Ukraine. It also seems likely that U.S. intelligence overestimated the capabilities of the Russian air force. Regardless, the failure played a major role in Russian forces’ failure to take the capital of Kyiv, and their subsequent retreat from western Ukraine.

The lesson in the critical importance of establishing air superiority is one the Air Force needs to refocus on, Brown noted, as the service moves from two decades of conflict in Iraq and Afghanistan, where it enjoyed a permissive air environment, to a focus on great power competition with the likes of Russia and especially China.

“We’ve operated in the past 20 years in a realm where air superiority was not contested,” Brown noted, and enemies such as al-Qaida in Iraq, the Taliban, and the Islamic State “did not have air forces or air defenses, and those are capabilities the Air Force will have to deal with in the future. Because air superiority is critical in allowing for freedom of movement for your ground forces. So we’re seeing in Ukraine that permissive air environments are not going to be the future.”

Another lesson cited was the critical and increasing role that space capabilities such as satellite surveillance and communications, and offensive and defensive cyber operations, will play in modern warfare. U.S. assistance to Ukrainian forces in the cyber realm, for instance, is largely credited with helping Ukraine fend off persistent Russian cyberattacks on critical communications nodes.

The Ukraine war has clearly demonstrated that “cyber offensive and defensive operations are critical to helping you communicate and move information, and deter and change an enemy’s behavior and confuse them by putting out deceptive information,” Brown said. “Because all modern militaries are highly dependent on moving information in order to impact decisions, and they need to protect that information, there are plenty of opportunities going forward in the cyber realm.”

Perhaps the preeminent question that shadowed discussions at the Aspen Security Forum was what lessons Beijing is taking from the Ukraine war and how those might impact its plans to reunify with Taiwan, by military force if necessary.

“I hope the lesson China is getting from the Ukraine war is that the economic consequences of such an act of aggression are extreme, and should be avoided at all costs, and the West needs to stick together [behind sanctions] to make sure they learn that lesson,” Kendall said. “China should also see that invasions intended to result in quick wins may not be successful, and you can get bogged down in a long campaign that you are not prepared for. I also hope that Taiwan is gaining lessons from the Ukraine war that can help them be successful in their own defense.”