Skip to content
The primary NGAD aircraft may not look like a traditional fighter if the Air Force decides that long range and weapons capacity take precedence over maneuverability in future air combat, particularly for the Pacific theater. In this illustration, a group of escorts support an NGAD resembling the B-21 bomber. Mike Tsukamoto/staff; Greg Davis/USAF
Expand Photo 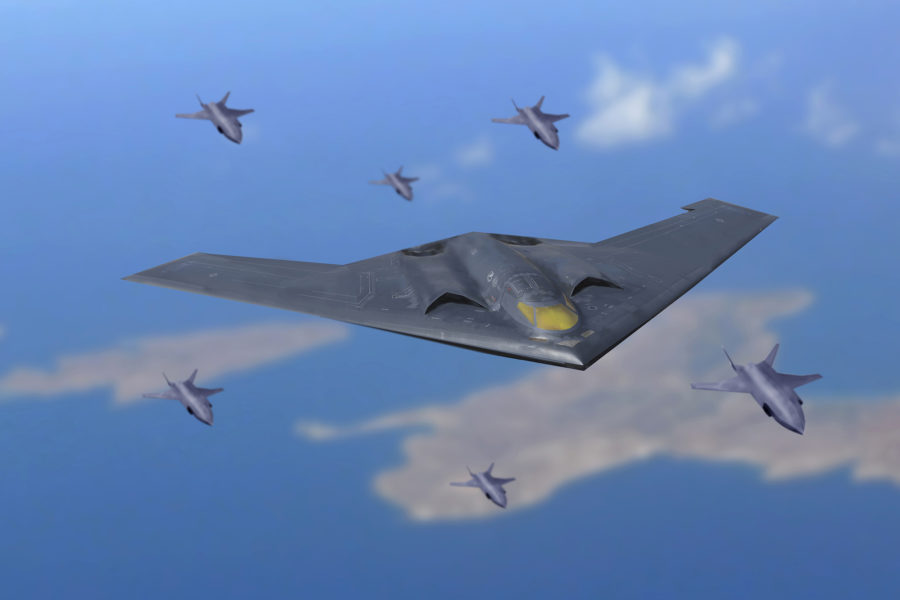 Kendall: Air Force Has an ‘Affordability Problem’ As It Tries to Meet Capability Gap

Air Force Secretary Frank Kendall said lower-cost unmanned platforms are key to closing any capacity gaps created by reducing the fleet in the near-term while the service invests in capabilities that will enable it to compete with peer adversary China in the long-term.

“To have an affordable Air Force of a reasonable size, we’ve got to introduce some lower cost platforms,” Kendall said June 1 at the Heritage Foundation, a conservative think tank in Washington, D.C.

That means acquiring low-cost unmanned platforms, including uncrewed fighters and bombers to fly in tandem with crewed aircraft.

“All the things we have to be buying right now and that we’re thinking about buying in the future, the unmanned platforms, they’re very expensive,” he said.

The Air Force is planning to cut 250 aircraft in fiscal year 2023, and acquire just 82, including 33 F-35s and 24 F-15EXs. The plan would maintain an Air Force half the size of the force it had during the Cold War.

Kendall said that both the F-35 and F-15EX cost over $80 million each; its follow-on, Next Generation Air Dominance (NGAD) would cost “quite a bit more”; and the B-21 bomber costs is “multiple hundreds of millions” of dollars.

“We have an affordability problem for sure, and the way to get at that is to start to buy some things that cost less,” Kendall said.

The unmanned platforms would work in unison with the F-35, NGAD, and the B-21 bomber.

Heritage Foundation senior research fellow John Venable argued that the Air Force stands at 2,056 platforms, less than half the 4,406 it had at the height of the Cold War in the 1980s, and yet the challenge China poses is more formidable than the Soviet Union by virtue of its economy, investment, and manufacturing capacity.

Kendall said keeping the force structure small is required to build the right kind of Air Force for the China challenge, because the service must free up funding for the development of future, higher-end platforms.

“We have to worry about capabilities, and what we need to do is get to the next generation,” said Kendall.

“What I’m seeing in the intelligence I get is that they’re not just worried about what we have now, what is clearly in our pipeline,” he said. “They’re thinking about how they’re going to defeat the thing after that.”

The Air Force is asking Congress to approve its highest research, development, testing, and evaluation budget ever at $49.2 billion.

But Venable argued the development of the F-35 took 17 years, far too long to wait for NGAD to come online. Kendall responded by saying that the F-35’s development time represents a “dramatic outlier,” and the average acquisition program takes seven years, promising that NGAD would be ready by the end of the decade.

Still, Venable argued that some 400 fighters would be retired in the next five years, according to current Air Force plans, further reducing America’s combat power.

Kendall, in return, said divestments in legacy aircraft and decisions to purchase less F 35s this year are part of building a more capable force for the future.

“There’s a perception that we’re creating a gap; the gap exists today,” between the capabilities the Air Force has and those its adversaries field, Kendall admitted.

“By having more of the things that aren’t adequate today, and using resources for those as opposed to getting on to the things we need to close that gap, that would be a mistake,” Kendall said. “We’ve got to get to the future.”