Skip to content
"AFWERX" initiatives, like this Las Vegas event in 2019, are bringing in lots of companies who haven't worked with the Air Force before. Acquisition panelists at vASC warn, though, that there has to be a payoff in production that will keep investors and startups coming back. Defense Department photo via Twitter.
Expand Photo 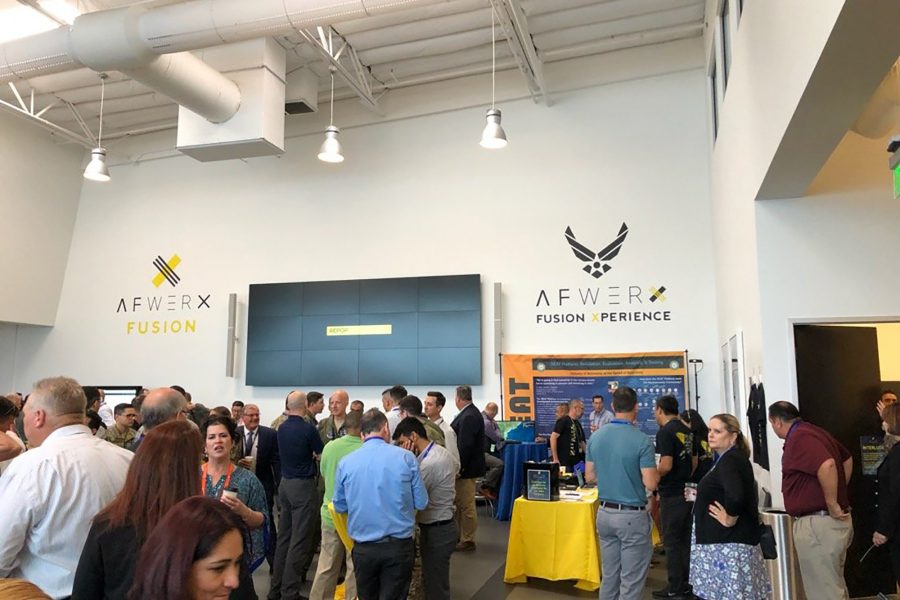 Keeping Innovators, After Attracting Them, Means Crossing the “Valley of Death”

Making investment money available to small companies and startups will attract them to defense work, but the results have to be transitioned to real programs to keep them in the game, acquisition panelists said at AFA’s virtual Air, Space & Cyber Conference.

However, it must be kept squarely in mind that the goal is to “actually transition things to the warfighter,” and projects must have “a very strong pull” from a major command or combatant commander. The results of prototyping have to “cross the Valley of Death,” he said, referring to the frequent problem of prototypes or experiments that succeed but don’t become a program of record because no one from a combat command actually asked for them.

However, “We have to prove to ourselves that what we’re doing makes sense,” Richardson said. “We have to show that we can make timely awards, and we have to deliver to the field.” If an investment doesn’t bear fruit in a couple of years, “we have to ask tough questions, like…why?”

Trae Stephens, executive chairman of Anduril, said the approach is the right one. “We are a nation of inventors,” he said; “a nation of entrepeneurs.” Being able to “tap into” the commercial market “is incredibly important to our future success.”

Venture capital works differently than other investments, and illustrates what the Air Force is aiming for, he said. “If we invest in 100 companies, we’re very happy if we have one or two that end up succeeding, and we fully expect that 90-plus percent will probably go to zero.” That’s OK, he said, because “if you get a multi-billion dollar return from your one winner, it doesn’t really matter that you lost five or $10 million over and over in finding that company.”

For this to work—“finding that one company”—the Air Force needs to take a “‘Field of Dreams’ approach: If you build the ecosystem…the infrastructure, to bring new entrants into the space, they will come.”

However, he added that if USAF fails to transition what it comes up with to real systems, those new entrants “will disappear.” That, he said, marks a “tremendous risk.”

The Air Force is telling the world “we are open for business,” but capital has to be available and growth has to be encouraged. And, there has to be a demonstrated payoff that investors can clearly see.

There’s also a risk “of falling into a ‘Howard Hughes’ model … of entrepreneurship,” Stephens said, where “the winners get to be winners and the losers are just guaranteed to be … losers from the beginning.” Some of the more significant “new entrants,” he said, “were founded by billionaires,” such as SpaceX, Anduril, and Palantir.

It’s “incredibly important” to be clear about how the “winners” will be selected, he said.

“There’s a long history” of the Defense Department insisting it doesn’t want to pick winners and losers, Stephens observed, but “the only way venture capital is going to stay involved as an asset class is … if we’re intentional …about picking winners, and making sure those winners scale to a place where there is equity value to be gained from their success.”

He also noted that whereas U.S. military dominance has previously been built on things like ships, spacecraft, or kinetic weapons, the “skill sets” for future victory are to be found in those specializing in artificial intelligence and autonomy, and those people “are sitting inside of the large tech companies, optimizing ads.” Those experts have to be attracted back “into working on issues of national strategic importance,” and “the jury’s still out” on whether or not that can be accomplished.

Lt. Gen. John F. Thompson, head of the Space and Missile Systems Center, said the number of “small to medium” companies doing prototyping, experimentation and demonstration for the Air Force and Space Force is growing rapidly. The Air Force has increased its bankroll for this effort from just $100 million last December to $500 million early in 2019, and USAF acquisition chief Will Roper, convinced even that was “not going to be enough,” has since raised it to $1.4 billion.

As a result, “at SMC today, with that $1.4 billion ceiling, we have 411 members of the space enterprise consortium; 330 of them are non-traditional to the defense industrial base. We’ve awarded 75 different prototyping contracts worth over $830 million, and we’ve been able to do it in a timeframe that’s 36 percent less that what would be normally anticipated.”

Thompson also said that SMC has put strong effort at making clear how it can be approached with new ideas and proposals. “It used to be,” he said, that an ally or company without an existing relationship with SMC “didn’t know where to go,” but now “we did definitely identify specific entry points for anybody who wanted to partner with us.

He also touted the creation of an “innovation office” and outreach for international partnerships.

Now, if someone wants to pitch an idea, “we can put you in touch…with the entire SMC enterprise, not just one program office.”

Stephens warned that while the word is getting out that the Air Force and the Defense Department writ large are “open for business,” it’s important to understand that “when rational capital is not returned to rational financial investors, there will be a rational decision to stop playing ball.” He said “we should all remind ourselves, as we engage with this, to make sure that we do transition capabilities” into programs of record that pay dividends in production.

Richardson said USAF acquisition is restructuring itself to change the culture. Part of that is “how we promote acquisition people … so that they’re not just … focused on the big primes.” However, “we’re also looking at how we can make sure there’s a business case for the traditional folks” like Lockheed Martin and Boeing, “but make sure there’s access for those that aren’t in that category.” It’s going to take “persistent effort along all those fronts to get the returns” the Air Force and investment capital need.