Skip to content
A new KC-46A Pegasus arrives at Joint Base McGuire-Dix-Lakehurst,N.J., March 18, 2022. U.S. Air Force Lt. Gen. Brian Robinson, Air Mobility Command deputy commander, personally delivered the aircraft to the 305th and 514th Air Mobility Wings who operate and maintain the aircraft with installation support from the 87th Air Base Wing. This is the sixth KC-46 of the expected 24 that will be stationed at Joint Base MDL. U.S. Air Force photo by Senior Airman Joseph Morales
Expand Photo 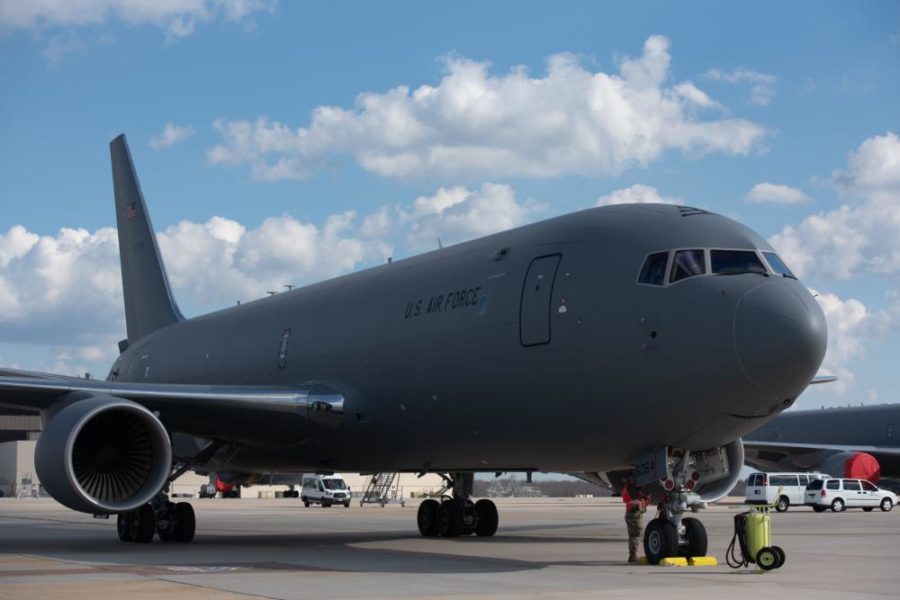 As the Air Force continues to look for a “bridge tanker” to follow the KC-46, top officials say they’re defining the requirements for the next aerial refueler—while the KC-46 itself continues to progress in the kinds of aircraft it can refuel.

The Department of the Air Force’s 2023 budget request asks for $198 million for research and testing for the KC-46, including funding for the bridge tanker program. Thus far, Lockheed Martin has put forth its LMXT airframe—which stands for Lockheed Martin “Next” Tanker—as a contender, while Boeing has reportedly said it will re-enter the KC-46.

In looking at what the service wants, Air Force Secretary Frank Kendall gave reporters a hint into how his team is leaning during a March 25 briefing.

“As we look for requirements, look further out, the requirements start to look like a modified KC-46 more than they do a completely new design,” Kendall said. “So we’re working our way through finalizing those requirements. Again, we’ll be doing due diligence market research analysis.

“… I want to be very transparent about this. I think that there’s still a possibility for competition out there. But as we’ve looked at our requirements, the likelihood of a competition has come down.”

On March 31, U.S. Transportation Command head Gen. Jacqueline D. Van Ovost didn’t go quite as far in speaking before a subpanel of the House Armed Services Committee. But she did say TRANSCOM is working to help draft the requirements for the bridge tanker as the military looks to move beyond the aging KC-135, which has been part of the Air Force for more than 60 years.

“We’ve been working with the Air Force on a recapitalization plan that will ensure that we can continue to recapitalize, because we recognize that a 70-year-old aircraft is very hard to maintain and the reliability on the road would not be good,” Van Ovost said. “So we are working with the Air Force on the requirements for the follow-on tanker, if you will, and … as you see in the budget, they have placed some money to try to take a look at that future refueler.”

Van Ovost also updated members on the status of the KC-46, which has faced serious issues with its Remote Vision System and other deficiencies, but has been gradually cleared to refuel more and more kinds of aircraft with “interim capability releases.”

In December, Air Mobility Command said the tanker could refuel nearly 70 percent of all aircraft in the fleet. Now, Van Ovost announced, AMC has cleared the KC-46 to fuel F-22s and F-35s, meaning it can now refuel roughly 85 percent of the fleet.

“In addition, they are doing exercises around the world to exercise our logistics chain and ensure that they can mobilize in the small packages and generate tanker capability while they’re forward. So I am heartened by the exercising that they’re doing,” Van Ovost said. “They’re also providing some capacity to TRANSCOM on a day-to-day basis to do refueling. I think this is the fastest way to [get to] fully operationally capable, by having the crews get out there and do reps and sets on that aircraft.”

Van Ovost also praised the KC-46 for possessing “some key capabilities that I would like to see going into the future. It’s part of the network—it’s connected. And it can do more. It’s multi-modal. It can do drogue and probe stick boom refueling.”

Later in the hearing, Van Ovost identified that ability to connect to the larger network as one of her top priorities for the future refueling fleet.

However, several lawmakers expressed frustration with the KC-46, pointing to delays that have forced the KC-135 to keep flying. In particular, Rep. Jerry Carl (R-Ala.) called it “embarrassing” for the Air Force to still rely on the KC-135 and pressed Van Ovost on the potential use of the Airbus A330—a variant of which Lockheed Martin plans to use for LMXT and which would be manufactured in Alabama.

Van Ovost noted that there are no A330s in USAF’s inventory but that other countries fly the plane and U.S. aircraft refuel from it.

Regardless of any bridge tanker, however, the KC-135 could continue to fly into the 2030s and beyond, and the Air Force “must” work to modernize the tanker so it can continue to fulfill TRANSCOM’s needs, Van Ovost said.

“There are numerous modifications that Air Mobility Command is trying to place into the KC-135. This is a little bit of a matter of scale with the number of airplanes that they would have to modify, but they are trying to not only make the airplane more relevant and survivable, but frankly, there are areas where parts obsolescence are a problem and they’ve got after just replacing stuff that they can’t fix anymore,” Van Ovost said. “So it is a large modernization program, but they’re working it very hard.”