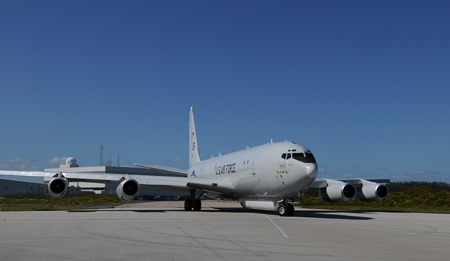 The E-8C JSTARS test bed aircraft flew for the first time with the production-standard Pratt & Whitney turbofans that Northrop Grumman has proposed retrofitting across the Air Force’s entire JSTARS ground-surveillance fleet, according to the company. “After three years of design, production, and testing, we are so pleased to have this important capability ready for full integration into the fleet,” said Bryan Lima, Northrop’s JSTARS modernization director. The company first flew the T-3 test bed with a developmental version of the new JT-8D powerplants in December 2008. Northrop argues that the commercially derived engine would significantly lower operating costs, enhance maintainability, and improve aircraft performance. T-3 took to the air with the production engines during a hop from Northrop’s facility in Melbourne, Fla., the company announced on Dec. 14. Whether the Air Force opts to re-engine the 17-aircraft-strong JSTARS fleet remains in question as the service weighs budget priorities and the best mix of future ground-surveillance capability.