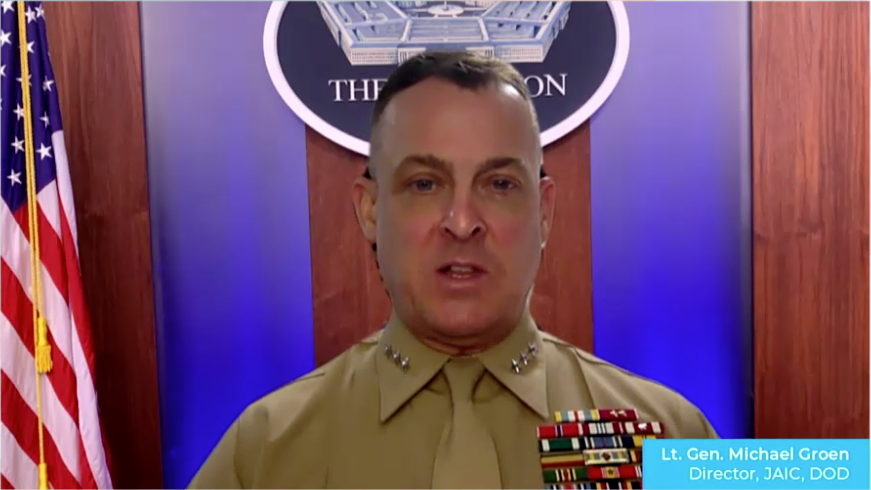 If the Department of Defense is going to get AI-ready by 2025, meeting the target set by a blue-ribbon commission this month, it will have to get out of its own way, Lt. Gen. Michael S. Groen, director of the Pentagon’s Joint Artificial Intelligence Center said March 11.

“It’s not just technology right? The technology is just a small piece of it,” he told a GovernmentCIO Media & Research event. More important for the DOD when it came to implementing AI was the need for digital modernization and to overcome bureaucratic inertia and other cultural or process barriers.

“You have personnel who have to take Navy data, put it on a hard drive, fly it to an Air Force network to transmit to another Air Force place, so they can push it out to different elements in the Joint Force,” said Groen. “That’s unacceptable, right? We’re moving data on hard drives … because we won’t allow each other’s personnel access to each other’s networks.”

These kinds of stovepipes were more apparent to JAIC personnel, Groen explained, because they weren’t in the business of developing new technology, but rather of working to implement existing technologies into new capabilities.

“We’re not a research and development organization, we’re an implementation organization. A ‘do’ tank rather than a think tank, right? Our job is to make AI applications happen across the department,” he said.

To answer that question, and to get across the bureaucratic barriers to AI adoption, JAIC needed leaders across DOD to commit to exploring the benefits of AI, including for back office functions. “We’re not talking about terminators here,” Groen said, “We’re talking about making the department as efficient and effective as any American corporation is today.”

Turning technology into capability, Groen said, had always meant putting it into the hands of “the process experts, the mission owners, the functional experts, … committed leaders who understand their processes and say, ‘Wow! You know what, we could do these processes a lot better than this [using AI.]’ ”

The daunting part of that task was “The scale of the Department of Defense and how many of those leaders need to put their hands up and go, ‘Holy cow! I’m missing the train here. I need to get working [on AI] in my space.’ That’s intimidating,” he concluded.

Groen spoke alongside Yll Bajraktari, executive director of the congressionally chartered National Security Commission on AI, which presented its final report to Congress on March 1.

The report, presented by commission chair and former Google CEO Eric Schmidt and his vice chair, former Deputy Secretary of Defense Robert O. Work, warned in grim tones that “America is not prepared to defend or compete in the AI era.”

“Within the next decade, China could surpass the United States as the world’s AI superpower,” the report concludes.

To avoid being overtaken, the U.S. “must double down on our existing advantages,” Bajraktari said.

AI is so central to national security because it amplifies so many military capabilities and can detect and expose strategic vulnerabilities of an adversary. It enables battlefield systems, like autonomous vehicles or drones, to be deployed at speed and scale. “In the future, warfare will pit algorithm against algorithm,” the commission’s report states, “Humans cannot be everywhere at once, but software can.”