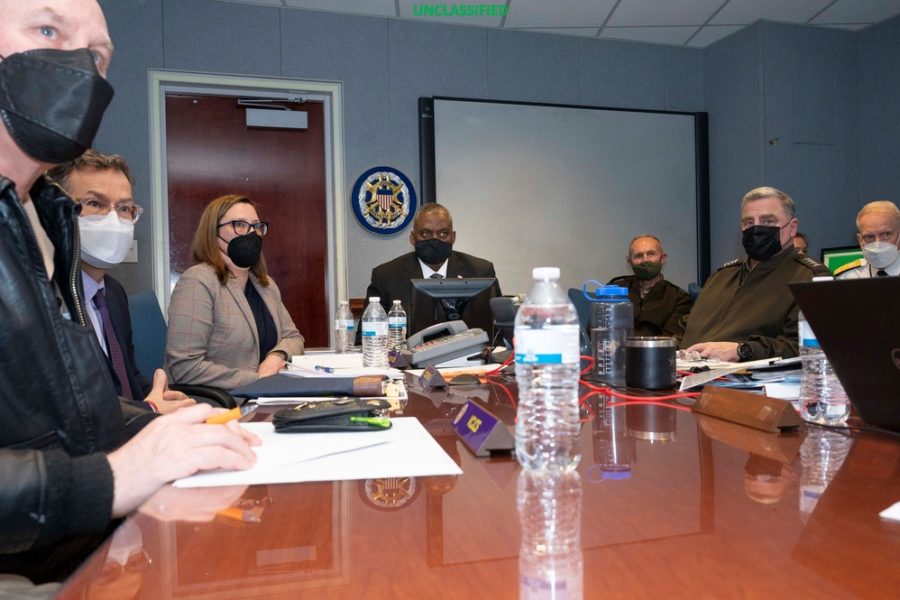 ISIS Leader Dies in Raid as Pentagon Opts Against Airstrike

The raid was conducted by U.S. Special Operations forces under the control of U.S. Central Command, Pentagon Press Secretary John F. Kirby said in a statement, with no American casualties. Kirby declined to provide any more information about the personnel who carried out the raid.

The mission had been in planning for months, and troops were on the ground for roughly two hours, Kirby told reporters in a press briefing. Upon landing near the building in Atmeh, Syria, U.S. forces used a bullhorn to “make several call-outs beseeching everybody in that building to leave” peacefully, Kirby said.

Shortly after the call-outs began, six individuals on the first floor were evacuated, but an explosion rocked the third floor of the building. Officials said the detonation was caused by al-Qurayshi, and that in addition to killing himself, it killed at least three other people on the floor.

“In a final act of desperate cowardice, with no regard to the lives of his own family or others in the building, he chose to blow himself up—not just the vest, but to blow up that third floor—rather than face justice for the crimes he has committed, taking several members of his family with him,” Biden said in brief remarks from the White House.

U.S. Central Command leader Gen. Kenneth F. McKenzie Jr., in a virtual seminar hosted by the Middle East Institute, said the explosion was “more massive than would be expected from a suicide vest,” and that it actually ejected several bodies, including al-Qurayshi’s, onto the ground below.

On the second floor, below al-Qurayshi, one of his deputies and the deputy’s wife engaged the U.S. troops, “firing back on our forces,” Kirby stated. During the subsequent firefight, the lieutenant, the wife, and another child were killed.

Before the U.S. troops left the area, though, a group approached the building. McKenzie said they were “assessed to be linked to the local al-Qaeda affiliate” and armed. Two members of the group were killed “by a gun engagement from a helicopter in defense of U.S. forces,” McKenzie added.

As American forces left, one of their helicopters suffered what Kirby called a “drive train issue.” The helicopter landed safely, but it was abandoned and subsequently detonated and “struck by air launch munitions to ensure that no sensitive equipment would remain in Syria,” McKenzie said.

The Pentagon’s estimates that at least nine people were killed during the raid. The Associated Press cited first responders in reporting that 13 people had been killed, including six children and four women.

However, 10 civilians, including eight children, were spared during the raid, officials said—six from the first floor and four more identified on the second floor.

The choice to conduct a raid instead of an airstrike was made, Biden said, to try to limit civilian casualties. The DOD has been under fire after a series of New York Times reports revealed thousands of civilian deaths in the Middle East caused by American airstrikes with little to no accountability. Defense Secretary Lloyd J. Austin III has ordered department leaders to draft an action plan to prevent and respond to civilian casualties.

“Knowing that this terrorist had chosen to surround himself with families, including children, we made a choice to pursue a Special Forces raid at a much greater risk to our own people, rather than targeting him with an airstrike,” Biden said.

With al-Qurayshi dead, ISIS is now leaderless, “but their twisted ideology and their intent to kill, maim, and terrorize still threaten our national security and the lives of countless innocents,” Austin said in a statement.

The Islamic State was driven underground in 2019 with the loss of virtually all of its former territory. Since then, however, the group has continued to conduct terrorist attacks, including a suicide bombing this past August in Kabul that killed 13 American service members and dozens of civilians during the U.S.’s withdrawal from Afghanistan.

Kirby declined to say whether al-Qurayshi had any involvement in that particular bombing, but he did say that al-Qurayshi was a “hands-on” leader who maintained “situational awareness” of a recent attack on a Syrian prison housing thousands of ISIS fighters that resulted in hundreds of deaths. He was also “directly involved” in the 2014 atrocities of the Yazidi minority in Iraq during which thousands were killed and raped in a campaign the United Nations labeled a genocide.

“This is a man that we should all be happy is no longer walking on the face of the Earth,” Kirby said.

McKenzie echoed that assessment, saying al-Qurayshi was more of a planner and operator than his predecessor, the infamous Abu Bakr al-Baghdadi.

“I think it’s going to be a significant blow to them. And look, I don’t want to oversell it, because local variants of ISIS … are going to continue to flourish,” McKenzie said. “… But I do think it makes it harder for them to come up with an integrated global approach.”