Skip to content
This image from the Accident Investigation Board report shows the quad anchoring system used in the mishap with nut still attached (left). However, since, the cam was not recovered, the cam depicted here (right), which would have been attached via quickdraw, is for reference for the way it was likely setup during the mishap climb. AIB report screenshot.
Expand Photo 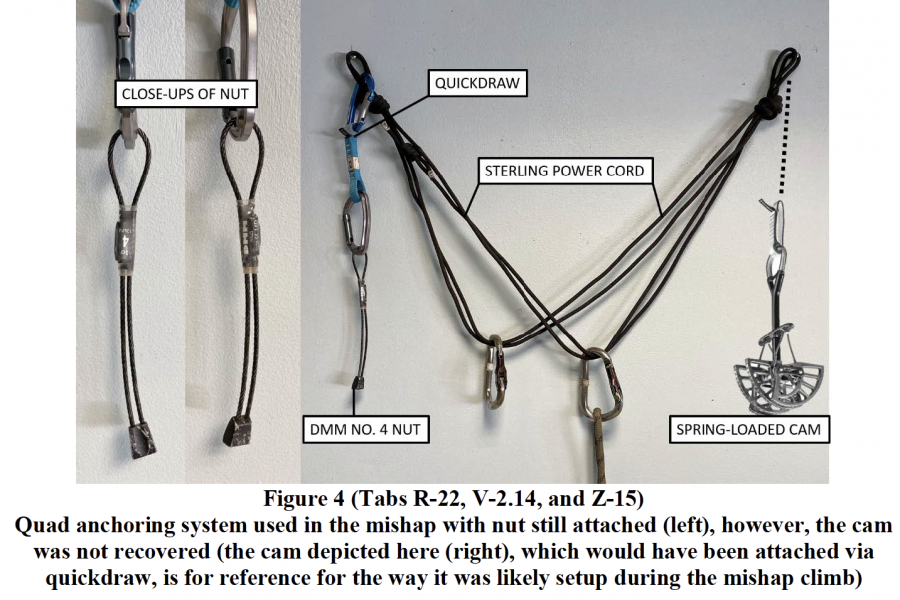 A pararescueman died during an October 2019 mountain rescue and climbing training exercise in Idaho after an anchor system failed, pulling him off the top of a cliff.

Tech. Sgt. Peter Kraines, 33, a Special Tactics PJ with the 24th Special Operations Wing at Pope Army Airfield, N.C., was one of five Airmen participating in a six-day training exercise to improve climbing skills near Boise.

On Oct. 8, 2019, the second day of training, the Airmen were conducting the final climb of the day. On top of the cliff, three Airmen set up a rappel line to descend when Kraines assessed that the permanently affixed anchor was not safe for inexperienced team members, according to an Air Force Accident Investigation Board report released June 18.

Instead, he identified another rock face where he could use traditional rock climbing protection, known as “pro.” Kraines placed two pieces of pro to build the anchor system and clipped onto it, the report states. One Airman clipped on and rappelled down safely. Another Airman clipped on and began to descend, and when he was approximately 15 feet above the ground one of the pieces of pro came loose and the Airman fell between six inches to two feet, the report states.

This caused the second piece of pro to break loose, and the Airman fell the rest of the way. Kraines, who was attached to the anchor system, was then pulled off the ledge and fell about 53 feet from the ground. The team and emergency responders tried to resuscitate him, without success.

Kraines was one of three Special Tactics Airmen who died in training within a six month period. On March 19, A1C Keigan Baker from the 24th SOW died during a training swim in Panama City, Fla. On Nov. 5, 2019, Staff Sgt. Cole Condiff, a combat controller with the 23rd Special Tactics Squadron, died after falling from a C-130 during parachute training in the Gulf of Mexico. Air Force Special Operations Command in December 2019 briefly suspended parachute, diving, and mountaineering training to review equipment and procedures.