Skip to content
Secretary of Defense Lloyd J. Austin III, Under Secretary of Defense (Comptroller) Michael McCord, and Chairman of the Joint Chiefs of Staff Gen. Mark A. Milley answer questions from the Senate Armed Services Committee during the Department of Defense budget posture in review of the Defense Authorization Request for Fiscal Year 2022, June 10, 2021. DOD Photo by Chad J. McNeeley.
Expand Photo 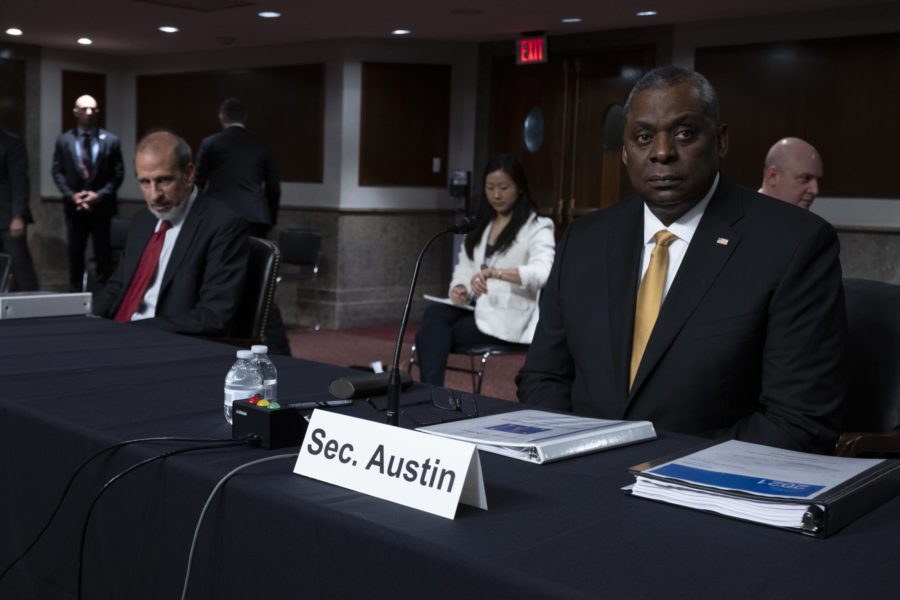 The Biden Administration’s inflation estimates will be the big story related to the fiscal 2023 defense budget submission, experts said in a Center for Strategic and International Studies “budget preview” streamed Feb. 7.

Todd Harrison, CSIS budget analyst, said if the Consumer Price Index quotes “a realistic number”—officially acknowledging that “we’re going to have higher than historical inflation … continuing for years to come”—that will be a “downer” for the stock market. If the administration quotes an escalation of just two percent, it could be criticized for lowballing the number and being unrealistic, he said. Either way, the choice will be the headline of the budget stories.

“It’s an impossible situation” for the administration, he said, and the inflation estimate will have “ripple effects” in both defense and non-defense parts of the budget.

Thomas Spoehr of the Heritage Foundation predicted that Biden will forward a defense budget increase of two percent or even less, having “paid no penalty for submitting a very low defense budget for 2022.” Congress, he said, “did the heavy lifting for him,” raising defense spending substantially above the administration’s request. Biden may “run the same play up the middle” in 2023, he said.

Experts on the panel offered guesses as to when the budget, which is traditionally released in February, would be sent up to Congress. Harrison chose a date of April 15, saying the administration will likely want to “bury” the announcement on a Friday just before Easter, the IRS tax filing deadline, and college spring break. “Internal turmoil” in the administration about the non-defense budget “is gumming up the works” and delaying the budget’s release, he said, and the goal may be to bury it among bigger headlines “like they did last year.” The 2022 budget was released in late May, which was later than normal, even for a brand new administration.

Mackenzie Eaglen of the American Enterprise Institute guessed a date of March 21, because Congress is likely to approve a third continuing resolution that will persist until March 11. There is, she said, a “chance of a yearlong” CR, but Harrison said he sees no “coupling” of the fiscal 2023 budget release to a final move on the fiscal 2022 budget. There’s no law that says the new budget can’t be submitted before the previous one becomes law, he noted.

Spoehr said the administration also will want to release the National Security Strategy and National Defense Strategy before the budget, as they will underpin what the budget says. That could add two weeks to the process, more if the new strategies are released separately.

The panelists said there likely won’t be too much of a break from the 2018 NDS. Stacie Pettyjohn of the Center for a New American Security said the big difference will likely be on nuclear posture, with a possible no-first-use declaration. She also speculated that to assuage the concerns of defense doves, the administration may cancel the low-yield sea-launched nuclear missile or the Long Range Stand Off missile.

Travis Sharp of the Center for Strategic and Budgetary Assessments said he expects the budget request to tout the “highest ever” investment in research and development, which would make a virtue of necessity if inflation continues to be high.

Spoehr said he expects that blunting climate change will be the new top priority for defense, “two will be fighting COVID,” and the third priority will be China as the pacing threat and verbiage about “integrated deterrence,” of which he said, “nobody has a  firm definition.” The all-of-government approach to security is useful, he said, but, “and I hope I’m not right in this, … they’re going to … emphasize the role of allies, particularly in Europe, and the United States is going to do less and the allies do more.” He said that’s a bad idea since two-thirds of NATO countries don’t meet the target of spending two percent of their gross domestic product on defense, he said.

Eaglen said she doesn’t see a major change in the NDS without some kind of “forcing function,” such as a Russian invasion of Ukraine, because it would be hard to get a consensus across the national defense and intelligence enterprise on a different path for national security.

The panelists expressed some consensus that end strength might be cut in the 2023 budget because of the downsizing of operations in the Middle East and a change from counterinsurgency to great power competition. The money saved could be applied to investment in modernization, but there will still likely be a push for divestiture of old systems to pay those same bills. There is also a pay raise in the 2022 defense bill that needs to be paid for.

Sharp said there will be “discussion” if not termination and possible divestment of the MQ-9 Reaper, as it is symbolic of the kind of operations the U.S. is shifting away from.

“There’s a feeling we need to transition to the Great Power competition, or whatever we’re going to be calling it in a few months,” and the MQ-9 is ill-suited to those kinds of roles, he said.

Harrison speculated that a new Army scout helicopter could be on the chopping block because “they’re going to have a real hard time justifying that” in a high-end fight, because helicopters “aren’t going to get anywhere near the fight.” He also said the Army tends to prefer cutting modernization programs to cutting end strength, if pushed.

Panelists also said they expected that if there are operations needed for Ukraine, or even just to pay for U.S. materiel provided to that country, those would be funded by a supplemental bill.

Sharp predicted a topline of $733 billion, which is close to what the Office of Management and Budget called as the growth line for 2023.

“They had placeholder projections in there, and it was … $731 billion,” he said. A difference of $2 billion is “fairy dust” in the context of the full defense budget, he said. Spoehr picked $735 billion, if there’s “no agreement” on FY ’22 and there’s a full-year CR. But if there is, he said the budget would be $750 billion, a two percent increase. Eaglen and Pettyjohn concurred on a level of around $735 billion.

Harrison was the outlier, saying the budget topline will be about $765 billion, an increase of seven percent over fiscal 2022.

“They know Congress is going to appropriate around $740 billion this year,” he said, and “then another three and a half percent from there.” The administration knows it has to fund a 4.6 percent pay raise, he said, with commensurate increases for housing and subsistence allowances, so “personnel costs, civilian and military, are going up,” as are services and goods.

A military budget at that level would remove defense from debate during the summer, he said, and leaves the field clear to argue about infrastructure and other non-defense spending.

“No one is going to criticize them for $765 billion,” he asserted. “It takes [defense] off the table in an election year.”