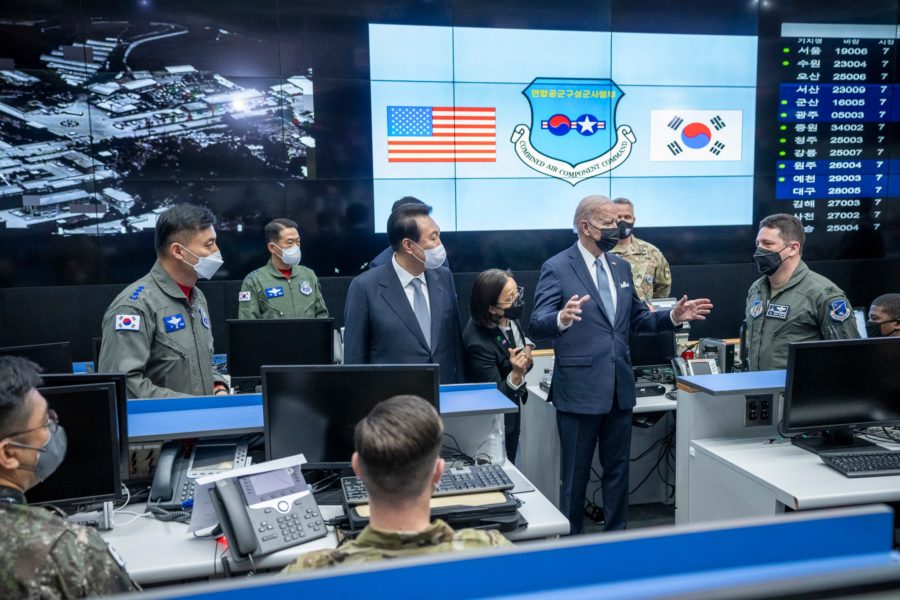 North Korea conducted it’s 17th round of ballistic missile tests of the year May 24, including a believed intercontinental ballistic missile, in the skies over the Pacific while President Joe Biden was returning to the United States from the region.

U.S. Indo-Pacific Command reported that the tests did not pose an “immediate threat” to the U.S. homeland, while Defense Secretary Lloyd J. Austin III called his South Korean counterpart to reassure the ally.

Biden concluded his five-day Pacific trip to Japan and South Korea May 24 under high alert that North Korean may conduct another ballistic missile test, and the north fired three rockets in violation of UN Security Council resolutions according to press reports. The first was believed to be an ICBM, the second failed in mid-air, and the third was a short-range ballistic missile.

“The missile launches [highlight] the destabilizing impact of the DPRK’s illicit weapons program,” read a May 25 statement by INDOPACOM. “The U.S. commitment to the defense of the Republic of Korea and Japan remains ironclad.”

“The two leaders strongly condemned today’s missile launches and pledged to work closely together to address the serious threat the DPRK’s provocative actions pose to the peace and stability of the Korean Peninsula, the region, and the global community more broadly,” the Pentagon said in a statement.

The White House was prepared for the possibility of ballistic missile tests by North Korea, and Biden’s travel itinerary highlighted U.S. and Pacific ally readiness with a May 22 stop by the president to the Air Operations Center’s combat operations floor at Osan Air Base, South Korea, where the threat from North Korean ballistic missiles is tracked.

“The fact is that deterring threats and underwriting stability is as vital today for not only the Peninsula but for the world,” Biden said during the visit.

In a May 21 joint statement with South Korean President Yoon Suk Yeol, Biden emphasized the U.S. commitment to defend the Republic of Korea.