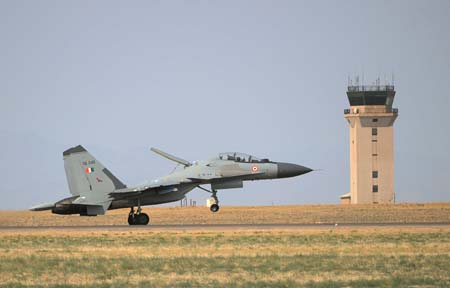 ndian Air Force Su-30MKI fighters touched down at Mountain Home AFB, Idaho, on July 17 to train with USAF F-15s from the base before participating in the upcoming Red Flag exercise at Nellis AFB, Nev. This is the first time that the Indian Air Force has been on American soil to train with US fighters. The Red Flag starts Aug. 9 and goes through Aug. 25. On July 13, the Su-30s landed at Lajes Field, Azores, in the Atlantic Ocean en route to the mainland US. The Indian contingent includes about 250 personnel, including 32 pilots, two tankers, and a cargo airplane. (Air Force photo caption by A1C Ryan Crane)