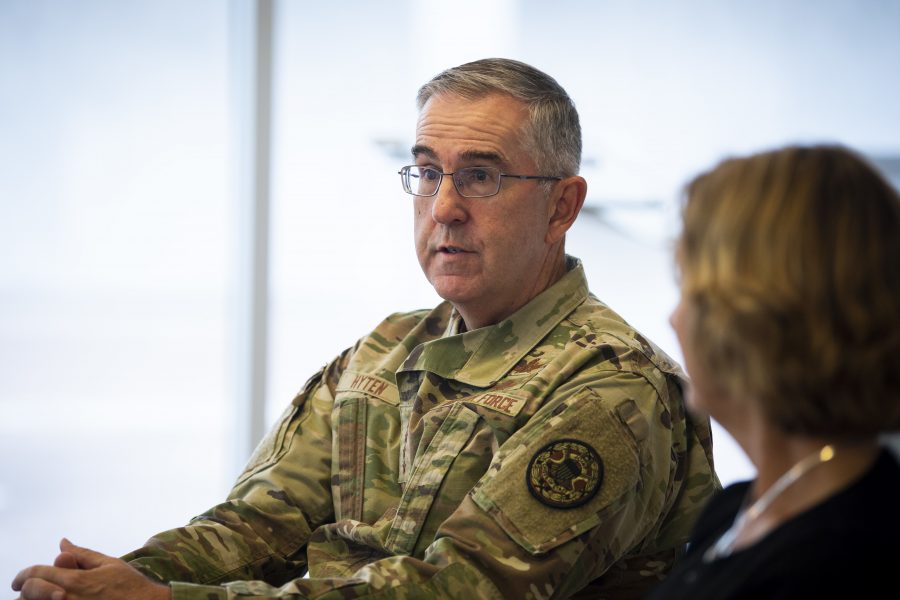 In a first, the Pentagon’s Joint Requirements Oversight Council will give the services requirements they must meet to fulfill joint electromagnetic spectrum and electronic warfare demands, JROC chairman and Joint Chiefs Vice Chair Gen. John E. Hyten said Jan. 6. The requirements in electromagnetic spectrum operations will be set in spring and the services will have to explain how they’ll meet them in the April timeframe.

Speaking during a virtual event sponsored by the Association of Old Crows, Hyten said too much emphasis has been put on top-level Pentagon governance of EMSO, and not enough on the nuts and bolts.

Governance is “where everybody’s been spending their attention. It’s important, but the least important” aspect of getting the U.S. military up to speed in electronic warfare and spectrum dominance.

Hyten pointed out that the recently released EMS strategy’s goals—develop capabilities, create an EMS infrastructure, create Total Force EMS readiness, and secure partnerships in the domain—are the responsibilities of the services. The JROC’s job will be to set common standards the services will have to match, so they can all “plug into” a joint EMS capability.

The U.S. military lost its edge in electronic warfare in the first dozen years of this century, mostly because it “wasn’t challenged” and got into “bad habits,” Hyten said. It was “entirely appropriate” that Congress stepped in and ordered changes, and this was a sign the military wasn’t moving fast enough to correct its “atrophied” EMS and EW capabilities.

Though no one was “talking about great power competition” in the 2012 timeframe, it’s now part of the National Defense Strategy, Hyten noted. “But if you’re in the military, you could see that coming. It wasn’t like it’s a mystery to the world that we had great power competition coming on the scene again, and we better be ready for it. We had taken our eyes off the ball,” he observed.

“All the service … recognized the problem … and we were starting to move, [but] we weren’t moving nearly fast enough, and when that happens, our friends across the river … tend to get involved.”

Congress has given the Pentagon two years to migrate EMS and EW governance out of U.S. Strategic Command into another “entity,” and he said that will be accomplished.

Reading the language enacted in the National Defense Authorization Act, Hyten said the Pentagon has two years to establish an organization that will take over all the STRATCOM commander’s responsibilities “‘that are germane to EMSO, including advocacy for electronic warfare, providing contingency electronic warfare support for other combatant commands, and supporting combatant command joint training and planning for EMSO.’ That’s what the law tells us to do.”

But STRATCOM doesn’t have the resources now to do the EMSO/EW mission, and until it does—until it’s “fixed”—Hyten won’t approve such a transition.

The “first thing we have to do is make STRATCOM whole, … because they are under-resourced, … undermanned, and not fully capable of performing the EMSO duties they’ve been given by the department.” When the mission moves in two years, he promised “it will be whole.” He said he’s been told by members of Congress “that we need to define what that is,” and once that’s happened, “they’ll be supportive in creating that structure.”

The “good news” on the EMSO front is that “we have had a lot of success in developing capabilities” in 2020, “in the budget cycle, and organizing effectively.” The Air Force, he noted, has “stood up its first spectrum warfare wing. That was long overdue [and] … critically important.”

Likewise, Space Force has stood up a delta—USSF’s version of a wing—“to focus on Space electronic warfare,” he added. The Army also has launched its first phase of brigades with integrated cyber and EW capabilities, and the Navy is developing its next-generation jammer pod.

“So we’re actually delivering those capabilities,” Hyten said. “Now it’s the responsibility of the Joint Force to integrate those into the battle. And that’s going to be a challenge.”

While the services are organizing, training, and equipping better, “we have a lot of work to do before we get there,” Hyten noted.

Hyten also reiterated his position that EMS and EW are not a separate fighting domain. There was a “big fight” over this in 2015, and he felt he could “argue both ways.” But now, “it’s more and more clear to me that spectrum is not its own domain.” It is part of every other domain fight—land, sea, air, space—and component commanders need to have a plan and win the EMS in their areas or the U.S. military as a whole “will fail in their mission,” he asserted.

Part of joint readiness will be creating a credible test capability; something that has “degraded in recent years,” Hyten noted.