Skip to content
An artist's rendering of the Hypersonic Air-breathing Weapon Concept (HAWC) developed by DARPA and the Air Force. Courtesy of DARPA.
Expand Photo 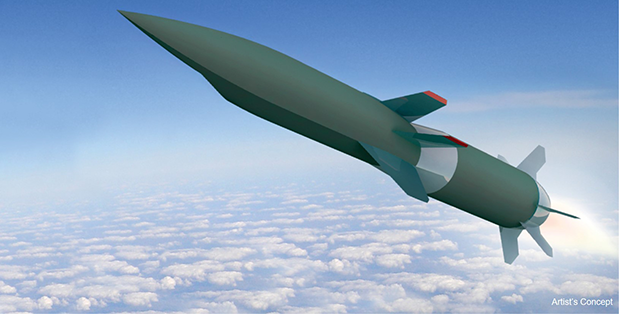 The Hypersonic Air-breathing Weapon Concept (HAWC) vehicle, developed under a partnership of the Air Force and the Defense Advanced Research Projects Agency, made a free flight the week of Sept. 20, a DARPA spokesman said, but most details are being withheld. The vehicle, which was built by Raytheon Technologies with a hypersonic engine built by Northrop Grumman, flew faster than Mach 5, but DARPA declined to say how long the vehicle flew.

The engine “kicked on” seconds after being released from an aircraft, which DARPA and the Air Force declined to identify, although DARPA expressed appreciation to “Navy flight test personnel.” The Navy has been conducting hypersonic missile research with F/A-18 aircraft.

The engine “compressed incoming air mixed with its hydrocarbon fuel and began igniting that fast-moving airflow mixture, propelling the cruiser at a speed greater than Mach 5,” DARPA said. In order for the scramjet engine to ignite, the vehicle must be moving at hypersonic speed, so a booster is used for that portion of the flight.

All of the “primary” goals of the test flight were achieved, including “vehicle integration and release sequence, safe separation from the launch aircraft, booster ignition and boost, booster separation and engine ignition, and cruise.”

The HAWC is exploring air-breathing hypersonic flight in parallel with the Air Force’s AGM-183A Air-launched Rapid-Response Weapon (ARRW), which is accelerated to hypersonic speed by a rocket before being released and gliding toward its target.

“The HAWC free flight test was a successful demonstration of the capabilities that will make hypersonic cruise missiles a highly effective tool for our warfighters,” said DARPA tactical technology office program manager Andrew Knoedler. The test “brings us one step closer to transitioning HAWC to a program of record that offers next generation capability to the U.S military.”

A DARPA spokesman quoted Knoedler as saying, “We are readying our next vehicles and working toward additional flight tests later in the year.”

Knoedler said the test is “the culmination of years of successful government and industry partnership, where a single, purpose-driven team accomplished an extremely challenging goal through intense collaboration.” He credited a partnership of the Air Force and “Navy flight test personnel who persevered through the pandemic to make the magic happen.”

The Air Force has said it plans to pursue both the ARRW and the Hypersonic Attack Cruise Missile (HACM), as initial and future hypersonic attack capabilities, respectively. The HACM will be an air-breathing system, which would have longer range than the ARRW because it can use ambient air for oxidizer, rather than relying on the boost effects of a missile. As ARRW glides to its target, it will lose energy because it is no longer powered. While the Air Force plans to put the ARRW on the B-52 in early iterations, it has said the HACM will be smaller and carried on fighter-sized aircraft.

The HAWC flight test data “will help validate affordable system designs and manufacturing approaches that will field air-breathing hypersonic missiles to our warfighters in the near future,” DARPA said.

DARPA announced one year ago that it had just completed captive-carry tests of HAWC and would make a free flight by the end of 2020, but that test was scrubbed, and apparently it took another 10 months to re-attempt it. Recent efforts to fly ARRW have not been successful, and an investigation into a July failed attempt is still underway.

Air Force Secretary Frank Kendall said last week he’s not satisfied with the pace of achievement in USAF’s hypersonic missile programs and pledged an upcoming “deep dive” into the various programs underway, looking for ways to improve and accelerate them.

Lockheed Martin is also working on HAWC, but DARPA did not mention the company in its release.