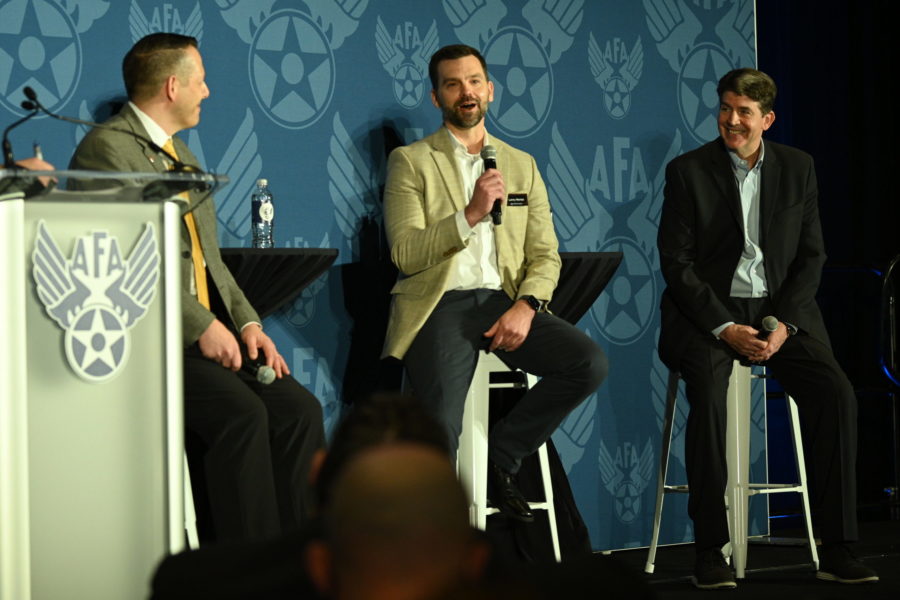 The Air Force is working to develop a command-and-control system that will anticipate the needs of Airmen in battle and use advanced technology and resilient communications to enable faster decision-making—but none of that will replace the person in the loop, a panel of military and industry specialists said.

“We are not computerizing battle management. We are not taking the sophisticated functions that sit in the hands of the profession of our battle managers and writing them into an algorithm,” Brig. Gen. Jeffery D. Valenzia, Air Force Advanced Battle Management System (ABMS) Cross-Functional Team Lead, told an audience at the AFA Warfare Symposium on March 3. “In fact, battle management is essential—that we have the man in the loop and part of that process—to take the data, the information, and turn it into knowledge and direct the actions if we’re going to win.”

ABMS is the Air Force’s component of joint all-domain command and control (JADC2), the Defense Department’s all-encompassing effort to own the future battlespace. Air Force Secretary Frank Kendall, who delivered the symposium’s opening address, listed operationally optimized ABMS as the second of his “seven operational imperatives” to meet emerging threats.

“I don’t need [battle managers] calling every shot in execution,” he said. “I need them to hand it over to a control node that has the tools and the ability to direct that action to meet that intent. It has to happen in a matter of microseconds in some cases.”

Merkel said creating a system that presents only necessary information to make command decisions is a key ABMS challenge.

“We know that’s underpinned by having these resilient networks that allow us to move data and information around,” he said. “But, ultimately, it does come down to the battle manager to make those effective decisions.”

It’s important, too, Fehlen said, that as powerful algorithms become part of command and control, human battle managers stay informed about what the algorithms sense and the decisions they’re driving.

“If the system is sensing the environment, wouldn’t a battle manager want to know that?” he said. “So it can be pushed into a battle manager’s picture to say, ‘Hey, there’s something going on over here. We may not fully understand it, but then you can allocate resources to understand.’”

To move ABMS from concept to reality, industry experts recommended embracing several concepts that originated in Silicon Valley: minimum viable product, or MVP; and development, security, and operations, or DevSecOps. Both support rapid development and communication and emphasize getting a product out into the world quickly and securely, with continuous iteration to improve and strengthen it.

“Engineers think they know how the operator is going to use a certain product, whatever that happens to be, and they think they’re smart,” Dorrell said. “And then when it actually gets in the operator’s hands, they find ways to utilize that product, that platform, that software that engineers never imagined. And DevSecOps tightens that loop.”

Lockheed Martin thinks its 17-plus years of demonstrations with unmanned aircraft with various degrees of autonomy will give it a leg up as the Air Force seeks to build new classes of tactical and strategic uncrewed aircraft, company aeronautics vice president Greg Ulmer said in an interview.