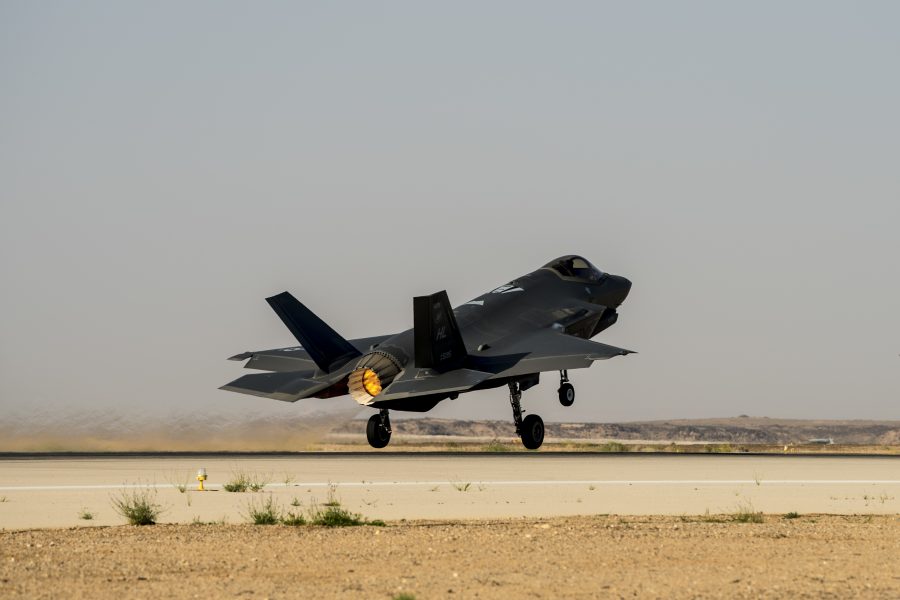 Air Force F-35As from Hill Air Force Base, Utah, have patrolled the skies of the Middle East continuously for the past 16 months, dropping bombs on the remnants of the Islamic State group and testing new tactics that will shape how the Joint Strike Fighter is used in the future.

The 34th Fighter Squadron’s deployment to the region from October 2019 to June 2020 checked off a lot of firsts for the F-35A, including the type’s first short-notice deployment and the first time the jet practiced agile combat employment—operating from both its home base of Al Dhafra Air Base, United Arab Emirates, and a small forward-deployed location.

“We proved that with the F-35 we can carry out a variety of mission sets. The requirements in CENTCOM go from close air support, all the way to opposed offensive and defensive counter-air and maritime support in the swing of a single day,” said Lt. Col. Aaron Cavazos, commander of the 34th Fighter Squadron, in a statement to Air Force Magazine. “You have to be ready for everything. We were doing everything from strafing in close air support, which wouldn’t normally compute in your brain with the capabilities a fifth-generation fighter brings, to running maritime escort for Carrier Strike Groups in the span of a single day.”

Back in October 2019, the 34th Fighter Squadron knew its deployment was coming, but the Airmen did not know when.

The squadron’s sister unit, the 4th Fighter Squadron, also from Hill Air Force Base, Utah, was finishing up the Air Force’s first combat deployment with the F-35A, and the 34th FS was next. It was going to be the Air Force’s biggest fifth-generation fighter deployment and it happened to come during a time of increased tensions with Iran, so it was fitting the deployment orders would be a bit of a surprise.

“I was flying a local exercise sortie at the time,” Cavazos said. “I got recalled by the command post while I was airborne to return to base and land. As a commander, that normally means somebody got hurt or we’re being deployed … A couple weeks later we had people flying combat sorties.”

The deployment marked a seminal time for the growing F-35A fleet. While the bulk of the squadron’s sorties focused on targeting the remnants of the Islamic State group, the F-35s also served a deterrence role against Iran, which is more in-tune with the higher end threat the stealth fighter was developed to fight as opposed to the long-established practice of conducting scheduled airstrikes, as directed in the air tasking order, in a permissive environment.

For example, the January 2020 Iranian ballistic missile strikes on U.S. bases in Iraq happened in the middle of the squadron’s deployment. While U.S. officials have not confirmed the presence of American aircraft in the region following the attack, Iranian and Russian officials claimed after the attack, six U.S. F-35s were tracked flying near its borders, spooking air defense crews to the point that one crew shot down a civilian airliner by accident.

“It is no surprise that the aircraft were deployed during periods of heightened tension within the Middle East,” said Brig. Gen. David W. Abba, the director of the Air Force’s F-35 Integration Office, during an AFA Mitchell Institute for Aerospace Studies event in March. “All I can tell you on that is that our aircrew and our jets were ready to respond on a moment’s notice, should the order have been given for anything, for any additional missions to be executed.”

Much of the squadron, while deployed, operated out of Al Dhafra—the base that has hosted Air Force stealth fighters deployed to the Middle East in recent years. But the squadron also forward deployed a third of its of Airmen and aircraft to an “undisclosed location” without the same level of support and infrastructure to conduct ongoing combat operations for about three months. The step was a real-life example of the agile combat employment effort the Air Force is practicing in other commands.

“Successfully implementing split operations was the biggest takeaway for us,” Cavasos said. “To be able to bed down in a forward location means that we now have unpredictability against potential adversaries. They are so used to us showing up in country, staying in the same place for half a year, doing the same things and leaving. They know it. We know it. Now we proved we can be more agile. That principal can carry over operationally to other regions and any potential adversaries there.”

While the broader F-35A fleet is still plagued by maintenance issues—only registering a 61.6 percent mission capable rate in 2019—the squadron was able to fly its first combat sortie within 24 hours and it didn’t lose one sortie due to a maintenance issue at either location while deployed, said Capt. Susan McLeod, the officer in charge of the 34th Aircraft Maintenance Unit, in a statement to Air Force Magazine. This at a time the F-35 enterprise is dealing with the continued problems of the Autonomic Logistics Information System, as the program moves toward its replacement.

“To support the forward deployed location and the extension to our deployment at the same time was a challenge,” said Senior Master Sgt. Westley Calloway, the lead production superintendent of the 34th Aircraft Maintenance Unit, in the statement. “We had to think creatively to solve logistics and communication challenges, because in a lot of ways we’re writing the playbook. But once those chains are established, we were able to maintain the health of our fleet and complete every task asked of us.”

The squadron returned to Hill in June, its deployment extended because of COVID-19 travel restrictions, and they have been replaced in theater by Hill’s 421st Fighter Squadron. The Utah base is the Air Force’s only operational F-35 location in the continental United States, and for the 34th, the deployment included pilots who had never deployed with any airplane as well as many young maintainers who had not worked in that environment before.

“I had guys straight from the basic F-35 course who got to see live combat, see how joint operations work, and the unpredictability of warfare. This experience is only going to help them going forward. It was a confidence booster and that perspective that will improve how they train back home,” Cavazos said. “Operationally, we’re becoming our own F-35 community. We aren’t a hodge-podge of pilots from other air frames anymore.”