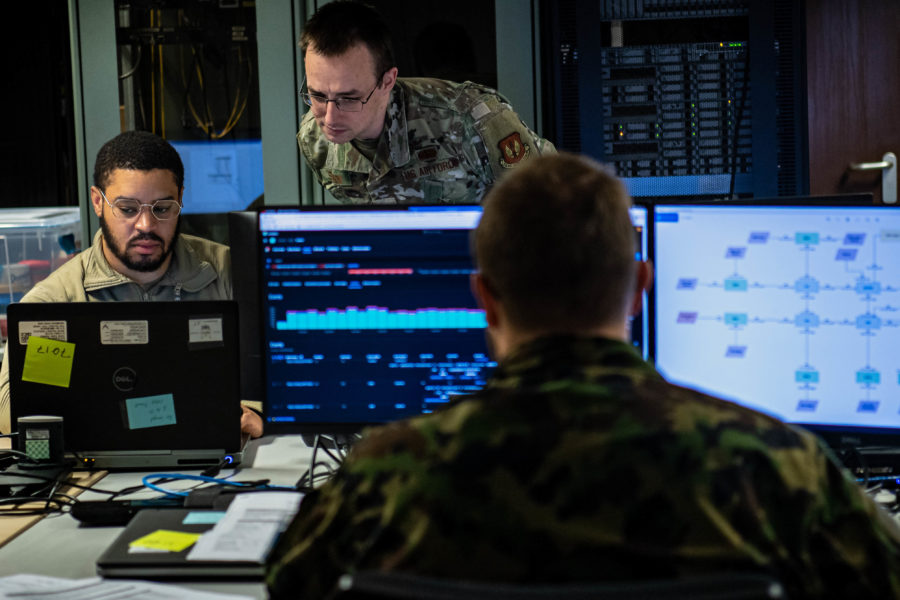 Since 1999, the USAF has developed and evolved the most advanced and prolific high fidelity distributed training capability for aircrews (or “the warfighter”). USAF leadership is urging us all to “accelerate the transition from the force we have to the force required for a future high-end fight.” This will require rethinking our training approach as we look to integrate 5th Gen platforms and merge test and training approaches.

In partnership with the Navy, HII developed and enhanced the resulting Navy Continuous Training Environment (NCTE) which was built on open standards and nonproprietary software, reducing costs and clearing away concerns about vendor-lock-in.

HII has been leveraging these proven methodologies to answer emerging Air Force training requirements on our growing USAF portfolio and range programs to prepare warfighters for joint all-domain operations.

“The NCTE architecture integrates tools, standards, and a collaborative workforce to [create] a simulation network that enables the warfighter to train as they fight in a distributed environment,” said John Bell, technical director at HII’s Mission Technologies LVC Solutions Group. “It’s fully scalable, so we can train at every level, from single ships and small groups of aircraft to carrier strike groups with air wings and combatant commands. We bring live, virtual, and constructive simulation training systems together into a single integrated organization.”

Airmen might hear such a statement and imagine that ships and aircraft carriers aren’t their problem, but Bell says when it comes to simulation, it’s all computers and software. In the digital realm, the difference between a ship and a fighter jet is just ones and zeros. The cloud-enabled network hubs HII built for the Navy in Norfolk, San Diego, and Japan facilitate training in every domain, with every service, and even with coalition partners.

“Using our open standards approach, we can interoperate training systems in the same way that go-to-war systems operate. We can even connect to our coalition partners wherever their training systems are located,” Bell said.

“JBUS is a gateway and protocol translation service,” Bell said. “It allows us to adapt different protocols, simulations and tactical systems to the same standards. The beauty of open standards is that everybody that implements to an open standard is capable of interoperating.”

Coding individual software solutions for every system would be prohibitive in cost and time. But with JBUS,” Bell said, “We allow these systems to connect to the NCTE easily so they can start training today.”

That kind of universal interface is exactly what the Air Force seems to be looking for, Bell said.

“The U.S. Air Force has many training platforms that are each built by their own vendor, which means they are not initially built to interoperate,” said Bell, who has spent more than two decades working these issues. “Our approach is a vendor neutral open system standard that any vendor can adapt to by using common tools and processes, so they can easily plug their systems into this common architecture. This open standards enterprise approach is the way of the future.”

NCTE can support small-scale operations like one or two pilots and planes conducting maneuver drills, or massive exercises in which multiple airwings and carrier strike groups train with joint and coalition partners.

“Integrating live training systems with those high-fidelity tactical trainers gives us a lot of insights into how a fully-blended LVC environment would work for the Air Force,” Bell said. “Fifth Generation fighters require a lot more sophistication of tactics and capability,” he said. “We’re looking at the different ways we can integrate high-fidelity simulations for the Joint Strike Fighter for testing and training in a common synthetic environment, using some of the lessons learned in developing the NCTE.”

HII has experience working with the Air National Guard’s Distributed Training Operations Center, having integrated that support nationwide. “The insight we get from conducting [ANG’s] location-wide training missions on a single network and their network connectivity and interoperability with other USAF DMO networks including DMON and MAF DMO, gives us a lot of insight into how Air Force Distributed Mission Operations works,” Bell said. “So we understand what the Air Force’s challenges are in running large training networks and how the techniques and approaches we’ve developed for the Navy can be applied to the Air Force’s training needs.”

That understanding includes a commitment to continuous modernization and advancement.

“We’re investigating how we can use Artificial Intelligence and Machine Learning to analyze training event data,” Bell said. The technology can help improve both after-action reporting and understanding, he added: “When were the targets detected? When did the bomb get dropped? How close was the bomb hit to the target? Why didn’t we detect the enemy at the appropriate range? From there, we can start comparing trends from one event to the next.”

“For LVC training, digital twin technology allows us to build high-fidelity representations of weapon systems, which is critical because our modern weapons systems depend on communications with each other in a fused-sensor-centric environment. Injecting a digital twin into that environment allows us to train at a much higher degree of fidelity that we can do with traditional simulation technology today.”

HII, Bell said, is developing the training capabilities of the future today to better prepare warfighters to join the joint force fight.

“Joint all domain training capabilities are a major challenge for the Department of Defense today,” Bell said. But HII has been supporting joint training for years. “We built the Navy Continuous Training Environment alongside the government with the intent of supporting joint warfare,” he added. “Our enterprise approach, with its tools, open architecture, and standards, is very applicable to the Air Force for conducting their joint all domain training with the other services.”

In many ways, the Air Force has embraced new technologies such as augmented and virtual reality for its training in recent years like never before—pilots, maintainers, even commanders dealing with suicidal Airmen have started to participate in programs designed to engage them in new ways. But the service can move…

After a brief one-year recovery, flying hours hve begun falling again across the Active Duty Air Force, although there were some gains for the Air National Guard and an overall improvement for the Air Force Reserve. Flying hours correlate to pilot proficiency and are a key indicator of readiness.

Nahom: F-35s Must be the Aggressors at Nellis and JPARC, Contract AdAir Not Enough

The Air Force needs stealthy "Aggressor" aircraft to spar with its fighters, and adversary air companies can no longer offer enough of a threat, the Air Force's programmer told the Senate Armed Services Committee. AdAir is "not giving us what we need" at Nellis AFB and at the JPARC range…

Watch, Read: Warfighter Training and Readiness in the Air and Space Forces

Air Education and Training Command has validated a new platform to keep track of disparate augmented and virtual reality training programs across the command with the goal of speeding up the training pipeline and creating a digital training record that will follow Airmen throughout their careers. The new technology, developed…

Recent Department of the Air Force Small Business Innovation Research contracts include technology research and development projects ranging from artificial intelligence to edge computing to augmented reality. "We have bolstered our relationship with nontraditional industry since partnering AFWERX with our Small Business Innovation Research Center of Excellence," said Kristen Baldwin,…