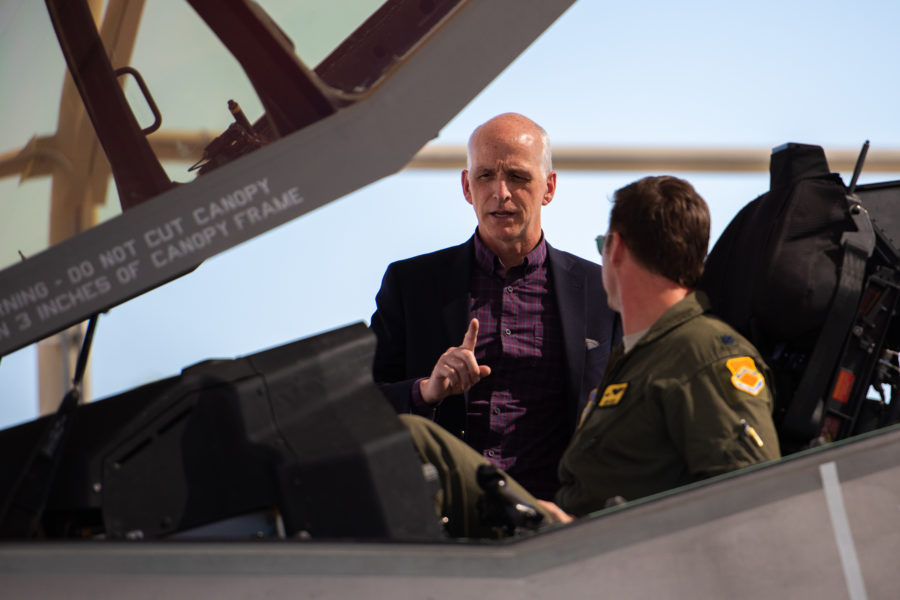 The services may want to pause buying the F-35 fighter until the Block 4 version is available—and possibly curtail the program from reaching planned buys, House Armed Services chairman Rep. Adam Smith (D-Wash.) told defense reporters. Meanwhile, lawmakers should take a hard look at the Next Generation Air Dominance system that’s the next step in fighter technology, Smith said. The Air Force is poised to spend scores of billions on the two programs in the coming decade.

Smith, who has long been a critic of the F-35—he has previously referred to it as a “rat hole” for its delays and high operating expense—said “we can do a hell of a lot better” on sustainment costs and suggested that the fifth-generation fighter is not as survivable as previously hoped. In the 2022 National Defense Authorization Act, he included a provision that will limit the number of F-35s the services can maintain starting in 2027, depending on how far sustainment costs come down.

More immediately, though, Smith told reporters that the continued delay of the F-35’s Block 4, a suite of upgrades, is creating a challenge for procurement.

“Frankly, until they’re able to produce the Block 4 F-35, we shouldn’t buy more,” Smith said. “Now the argument from the manufacturer is, ‘Buy the Block 3s, we’ll turn them into a Block 4 at some point.’ I don’t think it’s that simple or that cost-freeing. So I think we need to continue to put the pressure on them to get to the Block 4.”

The Air Force cut its planned buy of F-35s from 48 planes in previous years down to 33 in its 2023 budget request. The House Armed Services tactical air and land forces subcommittee did not adjust that amount in its markup of the 2023 NDAA, as it has in recent years, when it added aircraft to USAF’s request.

Air Force Secretary Frank Kendall has said he is “insistent” on getting Block 4 F-35s, and it’s an issue similar to one he’s faced before with the jet. As undersecretary of defense for acquisition, technology, and logistics, he capped purchases for several years to put pressure on prime contractor Lockheed Martin and to avoid buying jets that would later need to be modernized.

But beyond Block 4 and the possibility of a new engine, the F-35 faces a more existential issue, Smith argued.

“The world has changed a lot, even in the last 10 years, in terms of survivability. What is the mission of the F-35? Originally … it would be a fighter that could go anywhere and do anything.” But, “it’s not that” anymore, he said.

“Missile technology and targeting technology have simply gotten so much better in the last decade that it has limited the mission range of the F-35 to an extent. So what does that mean? What are we going to do to use it? I don’t know for sure. But I think it probably means we don’t need to buy as many as we had contemplated buying.”

Air Force leaders have repeatedly said they still plan to buy 1,763 F-35s over the course of the program, and foreign allies and partners such as Canada, Germany, and Finland are all planning on buying the fighter as well, increasing the benefits of interoperability. Lockheed Martin, meanwhile, continues to describe the jet as the “most lethal, survivable, and connected fighter jet in the world.”

The Next Generation Air Dominance program is still early in development and highly classified, but Kendall has said it will be a “family of systems,” including at least one crewed aircraft and an undisclosed number of uncrewed aircraft, along with other technologies that could include optionally crewed platforms, missiles, pods, and offboard capabilities.

That crewed aircraft, envisioned as a “sixth-generation” fighter to replace the F-22, could become the most expensive fighter ever; Kendall told lawmakers in April the price could be “multiple hundreds of millions of dollars” per plane.

At the time, he acknowledged that such a figure is “a number that’s going to get your attention.” And on June 15, Smith seemed to hint that the price could be an issue as it goes up against other budget priorities.

“What does the mix look like? What do you want to bring into that fight?” Smith said. “Right now, it seems to me that the investments we should be making are in more survivable drone systems, satellites, communications, missiles. When you look at the fights that are really going on, fighter planes haven’t been that big a part of it. It’s been the drones. It’s been the cyber.” He questioned whether the U.S. can “really afford to make that big of an investment in a plane? … That’s a decision that you have got to make.”

He said “maybe we’ve got to do this” because the Navy’s F/A-18 “can’t survive. You ain’t sending the F-35. And the thing is, you don’t know for sure what that technology is going to be.”

Smith cautioned that he is not calling for NGAD to be abandoned; in fact, he praised the structure of the program and gave it credit for using innovative technologies such as digital manufacturing.

But given the inherent uncertainty of the future, he sounded a note of caution about pinning too much on one program.

“I’m always reluctant to put a whole lot of chips in the middle of the table when you don’t know for sure. And the NGAD seems like a whole lot of chips going in the middle of the table,” Smith said. “And maybe you’ve got to do it. Maybe it’s a technology that, if somebody else gets there first and you haven’t gotten there, then you’re in a really bad place. … But I prefer a solution that puts you in a position to meet your defense needs without having to make such a large investment on sort of betting on the common technology.”

Ultimately, Smith acknowledged that the Air Force has to take action on things like NGAD to prepare for future threats, even if there is risk of failure. Still, he said, Congress needs to take a “hard look” to determine if NGAD is the right bet.

“I want those questions more thoroughly examined than just, well, of course, we have to build a sixth-generation fighter. Well, why? What’s it going to bring us?” Smith said. “I think we need to ask those questions before we make massive, massive investments in the program.”