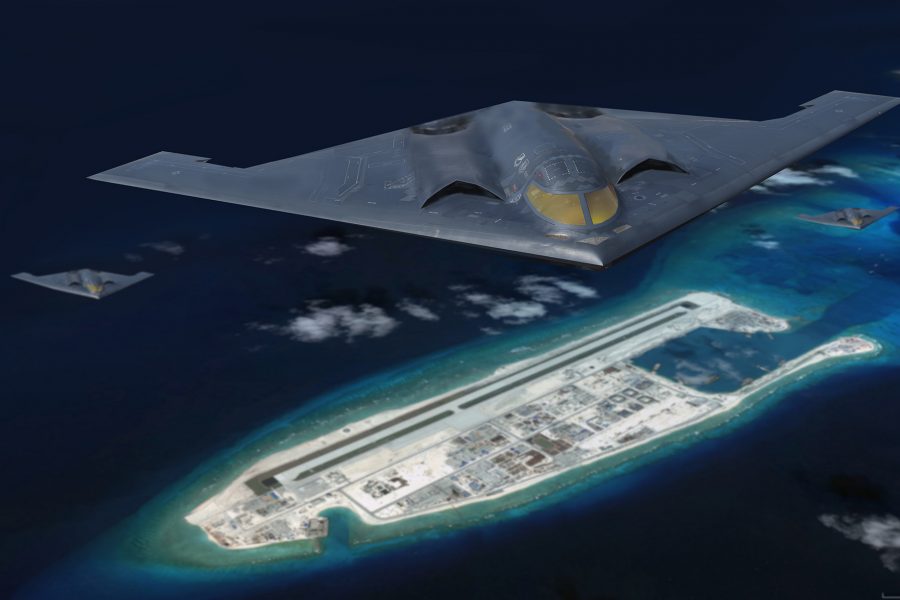 Heightened threats from Russia and China don’t automatically translate to a need for more than 100 B-21 Raiders, Air Force Chief of Staff Gen. Charles Q. Brown Jr. told the Senate Armed Services Committee on May 3. The service may simply bolster the number of escorts that go with the new bomber to do the long-range strike role, he said.

There is an “ongoing analysis” of how many B-21s the Air Force should ultimately buy, Brown told the SASC, and those are looking at whether to acquire “either more B-21s, or other capabilities that work with the B-21,” he said.

Brown and Air Force Secretary Frank Kendall also fielded questions on inflation’s effect on the Department of the Air Force; the procurement of E-7 Wedgetails to replace AWACS; retirement of some F-22s; lessons learned from Ukraine; and the possibilities of accelerating various programs.

On the B-21s, Brown said the Air Force is “working through crewed and uncrewed collaborative platforms that can work very closely with the B-21, so it may not mean, necessarily, an increased number of B-21s, but additional capability to go with the B-21, as well.”

Kendall has set as one of his seven “operational imperatives” the need to field strategic, unmanned collaborative platforms to be part of the B-21 “family of systems,” which could become available toward the end of the decade.

Brown acknowledged that there will always be some number of B-21s involved with training and maintenance, leaving fewer aircraft available for operational missions. But he said the program “is on track” and USAF will ensure it’s “easier to maintain … to increase aircraft availability.” The service would get the benefit of more aircraft if the ones it has are available more of the time.

Kendall said USAF is “concerned about inflation across the board” and that “our biggest, immediate concern is fuel prices—they’ve gone up substantially.” Kendall said the Air Force will have “about a $2 billion shortfall this year” for fuel “that we’ll have to address through one mechanism or another.”

There’s no way to predict what inflation will be like in 2023, “and we don’t know how different aspects of the economy will be affected,” Kendall said. “So we’re going to need to work with the Congress to make adjustments as we go forward.”

A number of senators criticized the Administration for offering a defense budget that increases at less than the rate of inflation, calling it a defense “cut.”

Sen. Elizabeth Warren (D-Mass.) noted the planned retirement of 33 F-22s in the fiscal 2023 budget and pointed out that the F-22 had originally been sold to Congress as having a service lifetime to 2060. She said she “applauds” the Air Force for “making the tough call” to retire instead of upgrade them, but suggested they had not been properly tested before a commitment to production, and this now contributes to their lesser capability.

She said the F-35 was also bought before being adequately tested and quoted the Government Accountability Office estimate that it will cost $11.7 billion to modify older models to the Block 4 configuration.

“You know where I’m going with this,” Warren said, quoting back to Kendall his onetime assertion that the F-35 was “acquisition malpractice.”

Kendall responded that what he meant at the time was that a production commitment to the F-35 had been made before flight testing had begun, and “It wasn’t a stable design,” he said.

“My rule of thumb for aircraft programs is that you should have about a year of flight testing under your belt—at least—before you commit to production,” a rule that may signal the timeline for programs such as the Next Generation Air Dominance aircraft.

“There’s always this tension, Senator, between people who are anxious to get … that new, wonderful airplane that’s coming out, and they don’t want to wait another two or three years to have you finish the design and then put on the upgrades that are coming,” Kendall asserted.

He added that “almost all of our aircraft evolve over time to respond to the threat.” The F-15 and F-16 have gone through this, and the F-35 “is now going through Technology Refresh 3 and Block 4 … The threat keeps changing.”

With that changing threat, the F-22’s capability has diminished, Kendall said, and it would cost “$50 million apiece” to bring the 33 F-22s being retired up to combat standards—an amount Kendall said would be better applied to new weapons.

Warren said the F-22 and F-35 bear lessons for the NGAD. “It’s largely classified. It may be necessary, but it’s also going to get even less oversight,” she noted “No public reports, less scrutiny from the GAO, the DODIG, and from the press, and this lack of transparency that we’ve already seen fail us becomes an even riskier process.”

Chairman Jack Reed (D-R.I.) noted that the Air Force plans to acquire the E-7 Wedgetail sole-source from Boeing, and given that, asked about a way to “get the aircraft faster” by executing a “grand bargain” along with other countries, such the U.K., that are already signed up to buy it.

“We are exploring options to try to do that [but] it’s not clear” that it can be done, Kendall said. He admitted it is likely to be no less than four years to buy the Wedgetail, because “we’re buying new commercial airplanes and then modifying them” to the Wedgetail configuration.

“Getting the airplanes is about a two-year process, and then modifying them is another two-year process,” he said.  It might be possible to “get access to aircraft earlier,” and there may be “ways to reduce risk and make that schedule.” Kendall said he’d work with the committee on the issue because “getting the aircraft quicker is something we all want.”

The Wedgetail uses the fuselage and wings from the 737-700 and the landing gear from the 737-800, creating a hybrid aircraft.

Asked what lessons can be learned from the conflict in Ukraine—and whether Russia’s heavy loss of aircraft and armored vehicles indicates that those platforms are obsolete—Kendall said it highlights the criticality of “sophisticated” aircraft and the need to overcome ground-based air defenses.

“On the other side of the equation, the Ukrainians have used the air defense systems that they have quite well. They’ve been able to keep them survivable against the threat, which I think says as much about the lack of capability of the Russians as it does about the capability of the Ukrainians. So, you may need to be careful about learning too many lessons from this until we really study it carefully,” Kendall asserted.

The conflict thus far has “reinforced my views about the importance of airpower, … but airpower must be sophisticated enough to deal with the threats that it faces, including ground-based air defenses like the ones the Ukrainians are employing,” Kendall said.

Asked for his perspective, Brown said, “Air superiority cannot be taken for granted.” A successful air force must be able to defend against air-to-air as well as surface-to-air threats, and “that’s what we, as the United States Air Force, are focused on, [making] sure we have the capability to do both, and train to that as well.”

Brown couldn’t say why Ukraine is not flying all its aircraft and suggested that Ukraine may be holding some in reserve to deter Russian air attacks.

Gen. John W. “Jay” Raymond, chief of space operations, said the war in Ukraine shows “the character of war has changed … This war shows the value of space providing information” to the defenders “as well as the value of commercial capabilities in intelligence being able to share information broadly … and shape the gray zone operations.”

Kendall said none of the lessons learned from Ukraine would suggest the Air Force has been precipitate in retiring the KC-10, and Brown noted that the KC-46 was in Europe for five weeks, and Airmen were “pleased” with how it did “in a deployed environment.”

Brown said USAF has “come to an agreement with Boeing” on the Remote Vision System, that “in about a year” the process of converting the aircraft to RVS 2.0 should begin.

He also said “we’re about eight airplanes away” from full certification of the KC-46 with all the types it needs to be able to refuel. Other issues with the airplane are “being worked out.”

On munitions, Kendall said that although the Air Force is buying only 88 Long Range Anti-Ship Missiles—a variant of the AGM-158 Joint Air-to-Surface Standoff Missile—the LRASM is “not the only anti-ship missile” the service is buying and that USAF will “definitely need more anti-ship capability going forward.”

The AGM-183 Air-launched Rapid Response Weapon (ARRW) hypersonic missile “has to have some success before we can go into production,” Kendall said, noting that the missile has “had some test failures.” And while engineers learn from failure, he doesn’t want to commit to production until the missile demonstrates it can work, he said.

“There are two tests that are planned over the next several months,” he reported, and those should indicate the health “and where we are” in the program, he said.