Skip to content
The United States Capitol is shown at night. Photo via the Architect of the Capitol on Twitter.
Expand Photo 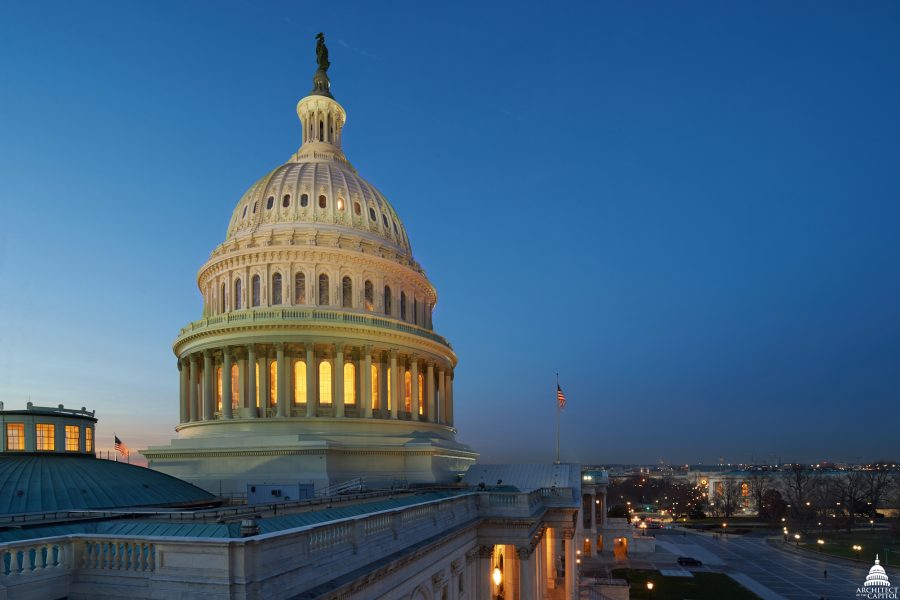 The House Armed Services Committee worked through its markup of the 2022 National Defense Authorization Act on Sept. 1, largely agreeing with its Senate counterpart on the overall top line of the Pentagon’s budget but breaking with it in regards to the establishment of a Space National Guard.

In a solidly bipartisan vote, the House panel agreed to boost the top line of the defense budget, adding an extra $23.9 billion to the administration’s request of $715 billion for the Pentagon, for a total of $738.9 billion.

The House committee approved the increase in the form of an amendment from Rep. Mike Rogers (R-Ala.), 42-17. The bump closely follows a July vote from the Senate Armed Services Committee to approve a markup of the 2022 National Defense Authorization Act with a $740.3 billion top line.

The armed services committees’ top lines mark a rebuke of President Joe Biden’s budget, which Republicans have criticized for not increasing enough over the 2021 NDAA to keep pace with inflation.

A sizable minority of Democrats on the House panel crossed party lines to vote for the increase as well, with many citing their concern over keeping pace with China’s growth.

“With the President’s budget, I have been saying ever since it was released, that it does not do enough,” Rep. Elaine Luria (D-Va.) said. “We needed three to five percent real growth, and I want to applaud Mr. Rogers … in finally doing what we need to do to deal with China.”

Also on Sept. 1, the House Armed Services Committee voted to include the establishment of a Space National Guard, setting up a potential conflict with its Senate counterpart’s version of the bill.

Reps. Jason Crow (D) and Doug Lamborn (R), both from Colorado, announced on Aug. 30 their intent to introduce the Space National Guard Establishment Act, and Crow included the legislation as an amendment in the full committee markup of the bill Sept. 1.

Crow’s amendment was included in a bloc of amendments that was quickly approved in a non-controversial voice vote.

Yet while the proposal met little resistance from HASC, it seemingly conflicts with the final markup of the NDAA approved by the Senate Armed Services Committee in July. That markup specifically proposed changing the name of the Air National Guard to the Air and Space National Guard, signaling that a separate Space Guard would not be happening.

Both the House and Senate Armed Services Committees’ versions of the NDAA still have to be approved by their respective chambers. If there are still differences between the two, a conference committee will have to draft compromise legislation.

The question of a Reserve or Guard component for the Space Force has been debated since soon after the establishment of the new service in December 2019.

Analysis from the nonpartisan Congressional Budget Office contested that claim, saying a separate Space National Guard would actually cost the Department of Defense an extra $100 million per year.

In the 2021 NDAA, Congress asked the Air and Space Forces to submit a report by March detailing how to organize Guard and Reserve personnel in the Space Force. That report was completed in June, Chief of Space Operations Gen. John W. “Jay” Raymond told lawmakers, but it remains in the Office of Management and Budget.

While military leaders have mostly endorsed the idea of a Space National Guard, members of Congress have been more divided on the issue, with some questioning the cost and the need for states to have military space operations.

Proponents have said, however, that not every state will need to have a Space National Guard component. Eight states—Alaska, Arkansas, California, Colorado, Florida, Hawaii, New York, and Ohio—as well as Guam have National Guard space units, encompassing more than 1,000 personnel.

For Crow and Lamborn, in particular, the issue of a Space National Guard is a local one—Colorado is a space hub, with the largest number of Guard members conducting space missions of any state.