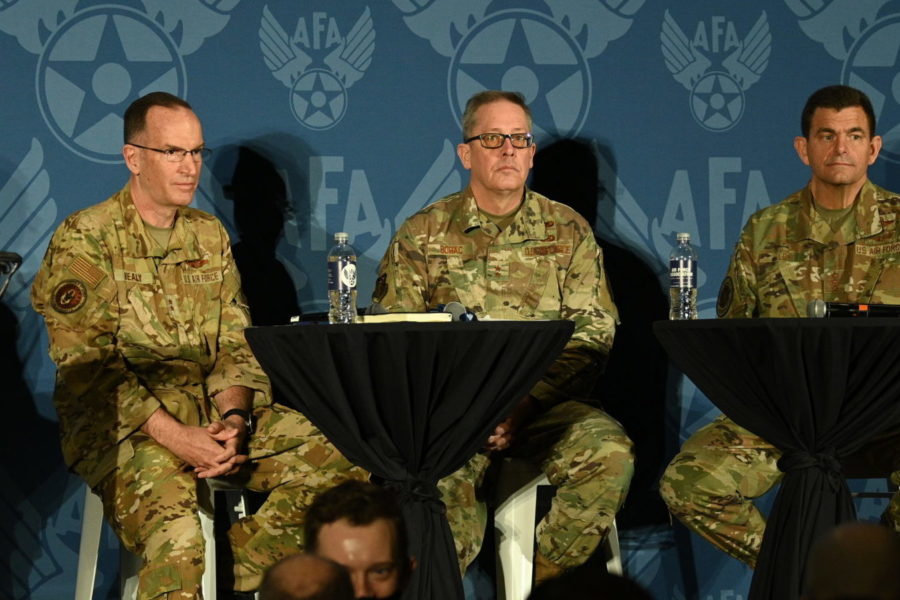 Between Retiring Old Aircraft and Modernizing, Guard and Reserve Watch for Readiness Gaps

Aging aircraft, limited sustainment funds, and still in-progress modernization are combining to cause concerns about readiness gaps in the Air Force Reserve and Air National Guard, leaders said during the AFA Warfare Symposium.

The Air Force has continually sought to retire old aircraft in recent years, saying the moves are necessary to free up funds for modernization efforts such as the F-35 and KC-46. These potential retirements would likely have an outsized impact on the Guard and Reserve—their fleets have higher percentages of legacy aircraft such as the F-15C/D, A-10, KC-135, and C-130H.

“As [Air Force Secretary Frank Kendall] said, the average age of the Active-duty fleet is 30 years,” Maj. Gen. John P. Healy, deputy to the chief of Air Force Reserve, told Air Force Magazine. “Ours is a touch more mature, at 33 for the average. But 44 percent of that fleet is beyond its expected service life.”

Reserve leaders are in “lockstep” with their Active-duty counterparts in encouraging the Air Force to modernize, Healy added, a sentiment echoed by Air National Guard chief Lt. Gen. Michael A. Loh.

But as those modernization efforts unfold, some are concerned about gaps developing between old systems going away and new ones coming online. In September 2021, Healy’s boss, Air Force Reserve commander Lt. Gen. Richard W. Scobee said, “in a perfect world, it would be heel to toe—you would have one butting up against the other”; before adding that, “on a regular basis, I am reminded we do not live in a perfect world.”

At the time, Scobee said he felt confident about the Reserve’s ability to work through any gap shorter than a year by sharing aircraft among units. Healy added in March that the three components of the total Air Force are all working together to align transitions “heel to toe.”

“There was discussion, and the great thing about the discussions as they go on in terms of how are we going to manage this from an Air Force perspective, … the fantastic partnership between the Active duty and the Reserve, and the Guard, for that matter, allowed the conversation to go on, to ensure that if there is a case where we might be talking about a cut or divestiture in any certain aircraft, that they understand that the base of mission needs to be covered,” Healy said. “And that’s the terminology we’re using. We’re not going to have any bases uncovered.”

Such transitions are currently happening at Seymour Johnson Air Force Base, N.C., where the Reserve’s 916th Air Refueling Wing is swapping out KC-135s for KC-46s.

And there are plans for more. Healy pointed to the recent decision to base Reserve KC-46s at March Air Reserve Base, Calif., and Loh referred to the plan to integrate F-15EXs and F-35s at five different Guard locations in the coming years.

“Right now we have a couple EXs that are running through tests,” Loh said. “The performance that the pilots have relayed to me, because I’ve talked to them—it’s exceptional. Great airplane. So we’re going to bring it on as fast as we can get it from under contract, and the contracting piece is going through right now.”

But even as the Guard looks to move fast in acquiring new fighters, its current fleet is showing its age badly—Loh remarked to reporters that 22 Guard F-15s are “grounded right now because of just service life.” This follows comments he made in September 2021 that 20 of the aircraft were grounded because of cracked backbones.

Repairs aren’t simple fixes, either, due to a limited budget.

“We do have some gaps in readiness, and here’s where I need your help in advocacy, and I’ll just put it to you that way,” Loh said during a symposium panel discussion. “Our weapon systems sustainment accounts continually come under pressure. Last year in 2021, we were funded at 87 percent. In [2022], right now, it’s down to 79 percent, and we’re still sitting on a [continuing resolution].”

Flying hours are also down, Loh noted, to the point that some Guard pilots have had to stop flying before the end of the fiscal year. Taken together, all these factors form a challenge to readiness that he admitted “keeps me up at night.

“That bow wave is hitting right now, and all of those are challenges that require resources,” Loh said. “And we’re gonna get after those gaps: modernization, recapitalization, weapon system sustainment, and flying hours. All of them require resources.”