Skip to content
Air Force Chief of Staff Gen. David Goldfein and Chief Master Sergeant of the Air Force Kaleth Wright take part in a Reddit ‘Ask Me Anything’ session on Oct. 24, 2019, at the Pentagon. Air Force photo by Andy Morataya.
Expand Photo 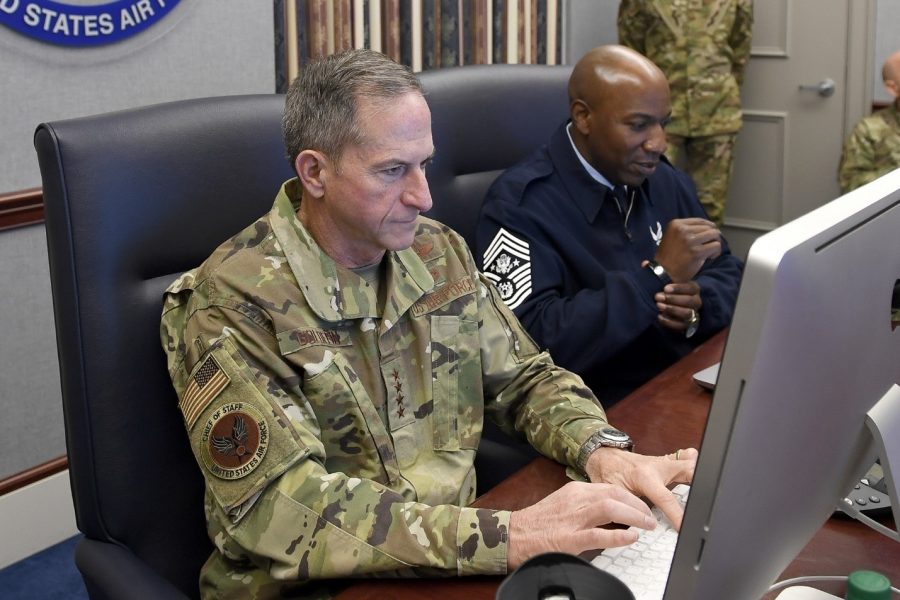 Goldfein on Racial Unrest: ‘We Will Not Shy Away from This’

Air Force Chief of Staff Gen. David Goldfein and Chief Master Sergeant of the Air Force Kaleth Wright will meet virtually with Airmen for two hours June 3 to discuss the way forward in the service with regards to racial inequality, as civil unrest continues to spread across the country.

Goldfein, in a June 2 letter to wing commanders, wrote that the Memorial Day death of George Floyd at the hands of Minneapolis police “is a national tragedy.”

“Every American should be outraged that the conduct exhibited by police in Minneapolis can still happen in 2020,” Goldfein wrote. “We all wish it were not possible for racism to occur in America.”

The service’s leaders acknowledge “that what happens on America’s streets is also resident in our Air Force. Sometimes it’s explicit, sometimes it’s subtle, but we are not immune to the spectrum of racial prejudice, systemic discrimination, and unconscious bias. We see this in the apparent inequity in our application of military justice. We will not shy away from this.”

While the discussion of different life experiences and viewpoints “can be tough, often uncomfortable” and avoided, the Air Force can no longer “walk by this problem,” he wrote.

First, the Air Force Inspector General will conduct an independent review, which was first announced in Wright’s letter on June 2, of the service’s legal system, racial injustice, and opportunities for advancement.

Second, Goldfein and Wright will host a Facebook town hall at 5 p.m. Eastern on the Chief of Staff of the Air Force’s page. The event is scheduled for two hours.

“We must look inward at our Air Force, and at every echelon of command, so we emerge stronger as a profession of arms,” Goldfein wrote. “It was our very own Gen. Benjamin O. Davis, Tuskegee Airman, who said, ‘The privileges of being an American belong to those brave enough to fight for them.’

“It is time for every one of us to strive for understanding and a culture of inclusiveness and belonging across our Air Force. I don’t have the answers, but I do know there is no room for bigotry, hatred, or small mindedness in our force. Period. Every member of our team needs to know we have their back.”

Space Force Chief of Space Operations Gen. Jay Raymond and Senior Enlisted Adviser Chief Master Sgt. Roger Towberman sent a letter to members of the Space Force on June 2, saying that Floyd’s death is a “stark reminder that racism and unequal treatment is a reality for many and a travesty for all.”

The leaders said that since the service is new, there is “an opportunity to get this right from the beginning” by making diversity and inclusion “one of the bedrock strengths” of the Space Force.