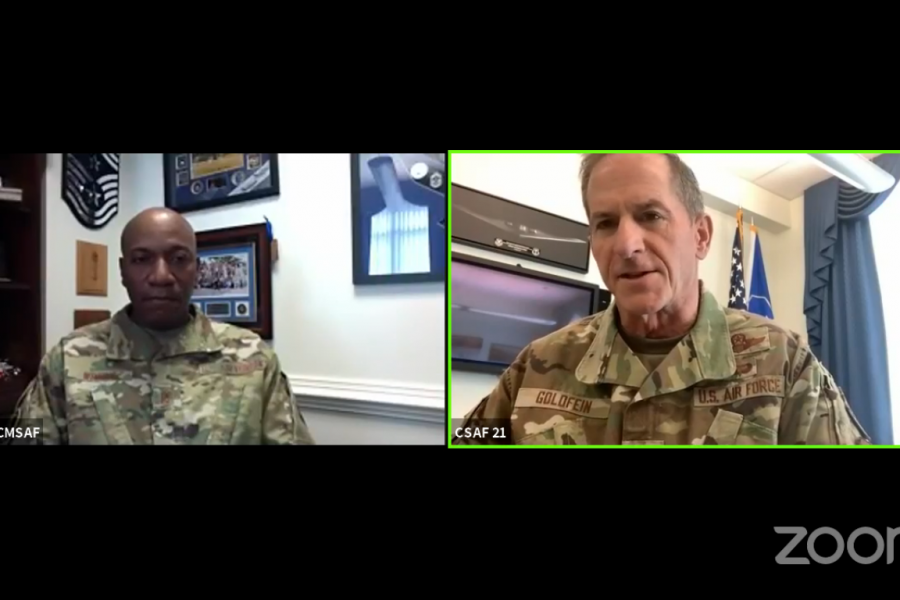 Air Force Chief of Staff Gen. David Goldfein expects the service’s stop-movement order will be extended past May 11 as the coronavirus pandemic continues.

Pentagon Undersecretary for Personnel and Readiness Matt Donovan, the former acting Air Force Secretary, is considering whether to direct a decision from the top of the Defense Department or leave the call up to each service. Goldfein said senior DOD leaders discussed next steps for permanent changes of station at an April 6 meeting.

Speaking with Chief Master Sergeant of the Air Force Kaleth Wright on a Facebook Live feed, Goldfein said he’s been studying the projections of how the pandemic might play out, echoing the federal government’s view that April and May will be the most challenging as hospital space and resources are stretched thin and the death toll rises. The next few weeks will be the toughest before infections begin to level off in June, he said, and July and August appear to offer a chance for recovery.

“May 12, we’re not that much better than when we’re sitting here today,” Goldfein said. “My sense is that we’re probably going to see an extension of the stop-movement for some period of time.”

The stop-movement order, which began in March, has ground to a halt job changes, family moves, training exercises, and deployment changes. It’s unclear how extending the order would affect issues like deploy-to-dwell time ratios, which ensure Airmen get enough rest between work periods, or the length of PCS assignments.

Goldfein added that Lt. Gen. Brian Kelly, the Air Force’s head of manpower, personnel, and services, will allow people who are set to retire soon to push their retirement dates until after the crisis subsides. Those who are eligible to separate can still leave if they want to, though retirement celebrations have been put on hold as people stay apart to reduce the risk of exposure to the coronavirus.

Acknowledging another issue on Airmen’s minds, Goldfein said the Air Force is considering letting service members use more of this year’s leave time next fiscal year.

Active-duty, active Air National Guard, and Air Force Reserve personnel who have accrued more than 60 days of leave typically have eight months to use up the time above the 60-day cap, or forfeit those extra days. Because people cannot travel, Goldfein said a decision is coming in the next two weeks that could let Airmen carry those days into 2021.

Wright indicated that once the Air Force can start letting life return to normal, that transition will need to gradually unfold instead of immediately rushing everyone back to the workplace.

“I trust that our medics and our command teams will be cautious, that we won’t just drop everything at once and say ‘OK, now everybody go back to work,’” he said. “I really like that COVID-19 has forced us to build some good habits that we probably should have had anyway, like the constant washing of our hands and being cautious when we’re in public places. … Our medics and our public health professionals will give us the right guidance that we need to be able to ease into working and continue being efficient and effective.”

Goldfein, who penned a letter to commanders in mid-March to offer leadership advice and raise morale, pointed to positive steps underway like containment of COVID-19 at BMT. Five of 6,000 Airmen who arrived at BMT have tested positive for the virus, but have since returned to training after a two-week quarantine, he said.

Goldfein added that the pandemic could inspire more people to join the military, as the armed forces saw after the Sept. 11, 2001 terror attacks.

“I think we will see that again across the nation, patriotism will be on the rise, especially as they see our incredible Air National Guardsmen and Reservists as they race to the sound of the guns and take care of the nation,” Goldfein said. “I do hope that we’ll see increased recruiting.”